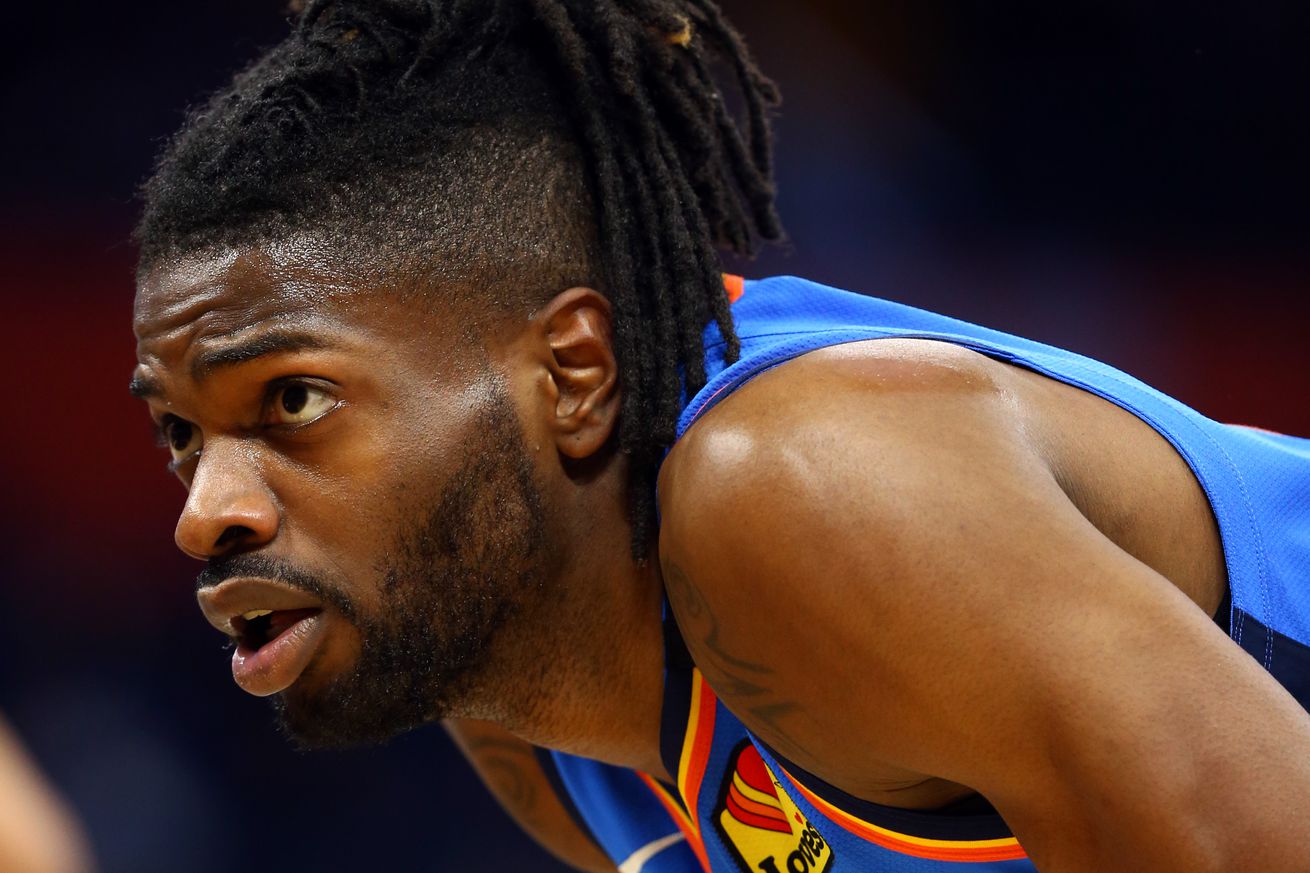 If the Suns are truly replacing Aron Baynes as Ayton’s backup, these are cheap options to replace him.

Rumor season is heating up.

But even as your keep your eyes glued to brightsideofthesun.com for the latest CP3 update, there are other issues to address! Free agency is only a week away, and with each passing day we come closer to parsing James Jones’ offseason strategy.

For example, this was an interesting nugget of info posted by Gambo in the form of a reply tweet the other day. It was tucked away in its own little corner, noticed by relatively few Suns fans.

Frank and Baynes won’t be back

This shouldn’t shock you, to be perfectly honest. Aron Baynes has a hefty cap hold of $10.3 million sitting on the Suns’ cap sheet, and the team would need to renounce that money in order to have any meaningful cap space for high-level free agents. They could opt to bring the whole squad back (Baynes/Saric/Carter/Payne), and forego having any cap space at all, but as of now things don’t seem to be trending in that direction.

The reality is, Baynes, Dario Saric, Frank Kaminsky and Cheick Diallo are all in a vulnerable position. Maybe a couple come back, or maybe none do, but in either case the team will need to target some lower-cost options that could replenish the depth chart. Here are some of my favorite names to do just that.

Plumlee has spent the past several seasons backing up Nikola Jokic, and as Jokic’s star continues to rise, Plumlee is the one feeling the consequences. He logged a career-low 17.3 minutes per game this season, averaging 7.2 points, 5.2 rebounds, and 0.6 blocks per game on 61% shooting.

When I phrase it like that, he doesn’t quite pop off the page, does he?

But there is one thing that makes Plumlee quite distinct from almost any other big in the league: his passing.

Plumlee’s vision is terrific for a center. He has a natural feel for finding cutters from the top of the key, or shooters from the low post.

He averaged 2.5 assists to just 1.3 turnovers per game, translating to 5.2 ast/2.8 tov per 36 minutes. Not only did that make him the perfect big to slot in behind Jokic in Denver’s system, but it makes him a great fit for Monty’s 0.5 offense as well.

Unfortunately, Plumlee wouldn’t bring the same level of spacing as Baynes, as he attempted just five threes this season. But a high-IQ player on both sides of the ball, many of Plumlee’s advanced stats actually eclipse Baynes’ numbers. I call him a low-cost option for the sake of this piece, but there’s a very solid chance that Plumlee actually commands more money than Baynes on the open market.

Still, if he has grown tired of his role with the Nuggets, Phoenix should absolutely be interested.

Let me make it clear, I love Aron Baynes. I love the hard screens, the wonky threes, all of it. But part of me misses the high-flying athleticism of a player like Richaun Holmes at the center position, who was one of the few bright spots of an otherwise miserable ‘18-19 campaign.

Holmes isn’t on the market this summer. But if you miss the sight of flashy blocks as much as I do, look no further than OKC’s Nerlens Noel.

Okay it’s halftime I know you have a minute to spare to think about basketball.

Imagine THIS anchoring the 2nd unit defense. Tell me you’re not in love. I mean come on, he’s perfect. pic.twitter.com/k2ITix293N

Noel hasn’t quite lived up to the expectations of being a 6th overall pick back in 2013, on account of him never putting together a versatile offensive package. He’s still just a dunker on that end, and not even an especially efficient one.

But on defense? His play speaks for itself. Noel averaged an absurd 1.9 steals and 2.9 blocks per 36 minutes this year. He still sometimes struggles with awareness issues, and he still sometimes gets a bit foul-happy. These are what make him “low-cost” in the first place.

But he can break up passing lanes with his massive 7’4” wingspan. He can switch onto guards with his above-average explosiveness. And of course, he protects the rim better than almost any other big in the league.

Make no mistake, Noel is not Rudy Gobert. He’d probably be lucky to get an offer of about $5 million/year. However, used in a limited role intended to accentuate his hustle, he will shine. And no doubt, he will become a fan favorite. Book it.

Perhaps you’re thinking that more of a veteran is the way to go? If that’s the case, Kyle O’Quinn is a standout name. And he’s perhaps the only big on the market whose beard can even come close to matching Aron’s.

For the past two seasons, the 30-year-old O’Quinn has been relegated to 3rd-string center duties. He played just 45 games for the Indiana Pacers two years ago, and this year, behind Joel Embiid and Al Horford, he only appeared in 29 games.

Even so, O’Quinn continues to have some level of impact as a defensive enforcer. He averages 2.4 blocks per 36 for his career, and held opponents to a comfortably below-average 57% shooting within six feet of the basket this year.

Just a couple years ago, O’Quinn had a terrific season as the Knicks’ primary backup center. On the one hand, I’d be willing to bet that he still has that level of production in him for some team. But with so much at stake for the Suns this year, it’s not worth the risk of asking him to overextend himself. O’Quinn is ultimately a good candidate for the veteran’s minimum, and is more suited to eat up Cheick Diallo’s minutes than Aron Baynes’.

The Raptors have developed quite the knack for taking gifted athletes and turning them into actual, serious basketball players.

Chris Boucher (Boo-shay) wasn’t expected to amount to anything when he signed his first ten-day contract with the Warriors at the age of 25. Two years later, he was cracking the everyday rotation of a legitimate title contender.

Boucher still only played 13 minutes per game this past year stuck behind Gasol and Ibaka, but with the amount of positive momentum behind him, he may just be primed for a breakout season. On offense he excels as a pick-and-roll finisher, sporting a massive 9’3” standing reach and an impressive vertical. But at just 200 pounds, he also has the agility to glide from coast-to-coast in transition and play down at the 4 as well.

Boucher has also been working on his range, having shot 32 percent from distance this year at a rate of 5.2 attempts per 36. He’s not quite at the point of being a consistent “floor spacer”, but he’s too good of a shooter to ignore completely.

Boucher’s career arc reminds me a lot of where Christian Wood was just a year ago, before his breakout. Boucher possesses a similarly rare combination of size, speed, touch, and aggression, all of which makes his offensive game especially potent. He needs to be plugged into a system with some competent veterans who can help slow the game down for him. But if the Suns feel that they’re at that point going into next season, he could provide tremendous backup value on a low-cost contract and potentially develop into much more down the road.

Closing out with another hapless minimum contract candidate. Noah Vonleh is just one year removed from averaging 8 points, 8 rebounds and a block per game for the Knicks. Granted that’s the Knicks, but he displayed a combination of a solid defense and effective floor spacing that made him really interesting to me as a free agent option last summer. In fact, I was shocked when he took just a 1-year, $2 million deal with Minnesota that suggested he was fighting for his NBA career.

One year later, it turns out that Minnesota saw something that I didn’t. Vonleh barely cracked their rotation this season, and then was traded to Denver, where he sat behind the aforementioned Mason Plumlee as a third-stringer. In total, Vonleh logged just 36 appearances this season, for an average of 10.5 MPG.

Despite all that, I’m not giving up. Even in his very limited role, Vonleh posted a VORP above replacement level this season. He continues to excel as a gifted rebounder, with a rebounding rate better than any player on the Suns’ roster except for Deandre Ayton. And of course, he flashes some spacing potential as a career 31% three-point shooter.

Similar to O’Quinn, I wouldn’t make Vonleh my primary backup to Ayton. But if this team needs an extra big body to fill out the depth chart after more pressing moves have been made, he remains a great option for the job.

A quick shoutout to some other names that at least intrigue me.