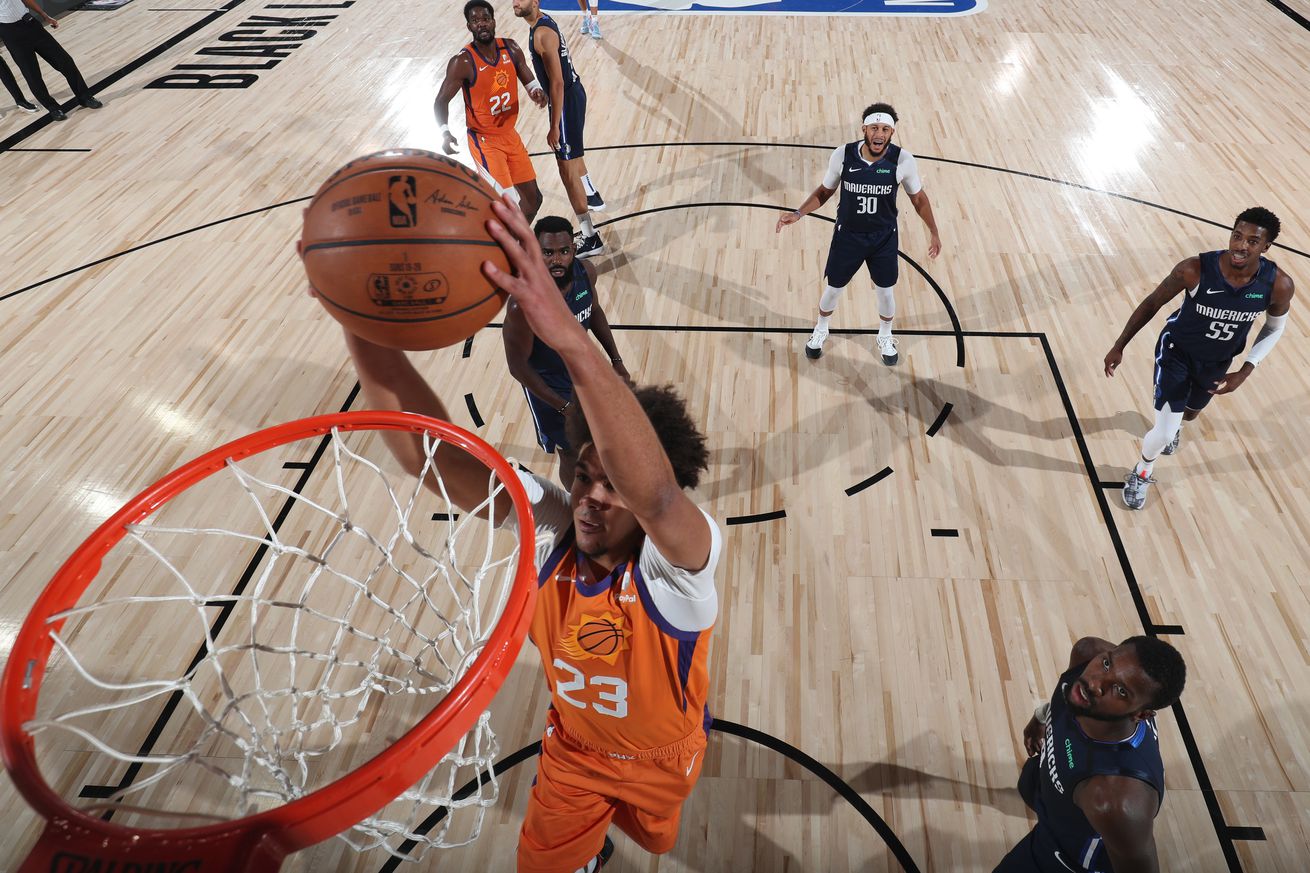 After being laughed at for being taken 11th overall by the Suns, Cameron Johnson was one of 17 rookies to get votes for All-Rookie team.

Phoenix Suns rookie forward Cameron Johnson began the season in the regular rotation and, when Kelly Oubre Jr. sat out the restart to rehab his knee, ended the season as a starter for a team that went 8-0 to finish 34-39 for the year. He’s the fastest player to make 100 three-pointers in Suns franchise history and you, the Bright Side, voted Cam your sixth-most important player in SunsRank voting last week.

Johnson, selected 11th overall in the 2019 NBA Draft, received three votes from media for one of the 10 All-Rookie slots awarded for the biggest rookie splashes. The top 10 vote-getters received at least 64 votes apiece with a high of 100.

Important note: the vote was based SOLELY on games played through March 11, and was taken before the Orlando Bubble began.

The All-Rookie teams were loaded with big-hype leaders and well as big-minute players on nationally covered teams.

There’s no shame in being taken 11th in a draft and then not making a Top 10 list from that Draft. But it’s also valuable to note that five of those top 10 were taken later than Cam: P.J. Washington (12th), Tyler Herro (13th), Brandon Clarke (21st), Terence Davis II (Undrafted) and Kendrick Nunn (Undrafted). What does that mean? It means the draft is a crapshoot.

Still, on the Bright Side, Johnson got more All-Rookie votes than two of the players taken ahead of him in Jarrett Culver (6th) and Cam Reddish (10th).

That’s a great finish for a player mainly derided when the Suns picked him 11th more than a year ago in the 2019 Draft. Here, let me help remind you what people said.

These takes were primarily because Johnson was the oldest player in the Draft (he’s a dastardly 24 years old now) and the oldest lottery player taken in a gob-ton of years. Johnson also had some red flags for medical reasons. He’d missed a whole year in college due to hip surgery, which contributed to his advanced age upon entering the draft.

The Ringer absolutely nailed it, by the way.

The Suns have suddenly become conservative with their lottery picks. A year after they traded up to no. 10 to take Mikal Bridges, an experienced wing with a proven 3-point shot, they took a similar type of player in Johnson, a fifth-year senior from North Carolina with one of the best 3-point shots in this year’s draft. Johnson isn’t as good defensively as Bridges, but his size (6-foot-9, 205 pounds) should at least allow him to survive on that end of the floor. Johnson will have an immediate role in the NBA, which means he is a pretty safe bet to give them solid minutes off the bench, even if he never ends up as a high-level starter. He hasn’t shown the ability to do much on offense beyond shoot, but he won’t need to if he’s playing with Devin Booker and D’Angelo Russell, the latter of whom they may target in restricted free agency.

Their words are basically the same words used by Suns GM James Jones when talking pre-draft about the kind of player he wanted to find and post-draft about how he found it in Cam Johnson. By the end of the year, Bridges and Cam were starters for the Suns during that eight-game winning streak in Orlando.

It took Coby a couple of seconds to pull himself together, but when he did it pull together you know he had nothing but praise for Cam.

“That’s crazy, that’s so love bro,” Coby said. “Y’all know Cam…you don’t know how hard Cam worked. And you know there’s a lot of people that doubt him, but, wow, it’s such a… that’s crazy bro. Wow, that’s so crazy.”

Johnson’s baby face reminds you he’s a youngun, but at 23 years old at the time of the Draft his upside was seen as barely above his own head.

Yet, Cam does look like a new-age NBA player in the mold of Duncan Robinson of the Heat — a dead-eye shooter with a quick release who can also drive against close-outs and defend either forward position passably. Head coach Monty Williams relied heavily on Cam for big minutes during their eight-game winning streak to end the season, and Cam rewarded him with mistake-free team-oriented play.

“Y’all don’t understand how happy I am for Cam,” White said on that night more than a year ago. “He proved it night in, night out that he deserves to be in the conversation for a lottery pick. Wow, bro, I’m getting chills!”

You’ve got to think that if the voters could have included impressions from Cam’s play in the Suns 8-0 Bubble Run, he would have gotten a gob-ton closer to making one of the All-Rookie teams. But as it is, I’m happy he was one of only 17 rookies to get any votes at all after all those negative post-Draft reactions.

The 2020 NBA Draft has been set in stone for Nov. 18. That’s your next chance to see the Suns (probably) take a guy the critics will boo but (probably) end up as a regular in the rotation for a playoff-pushing team.