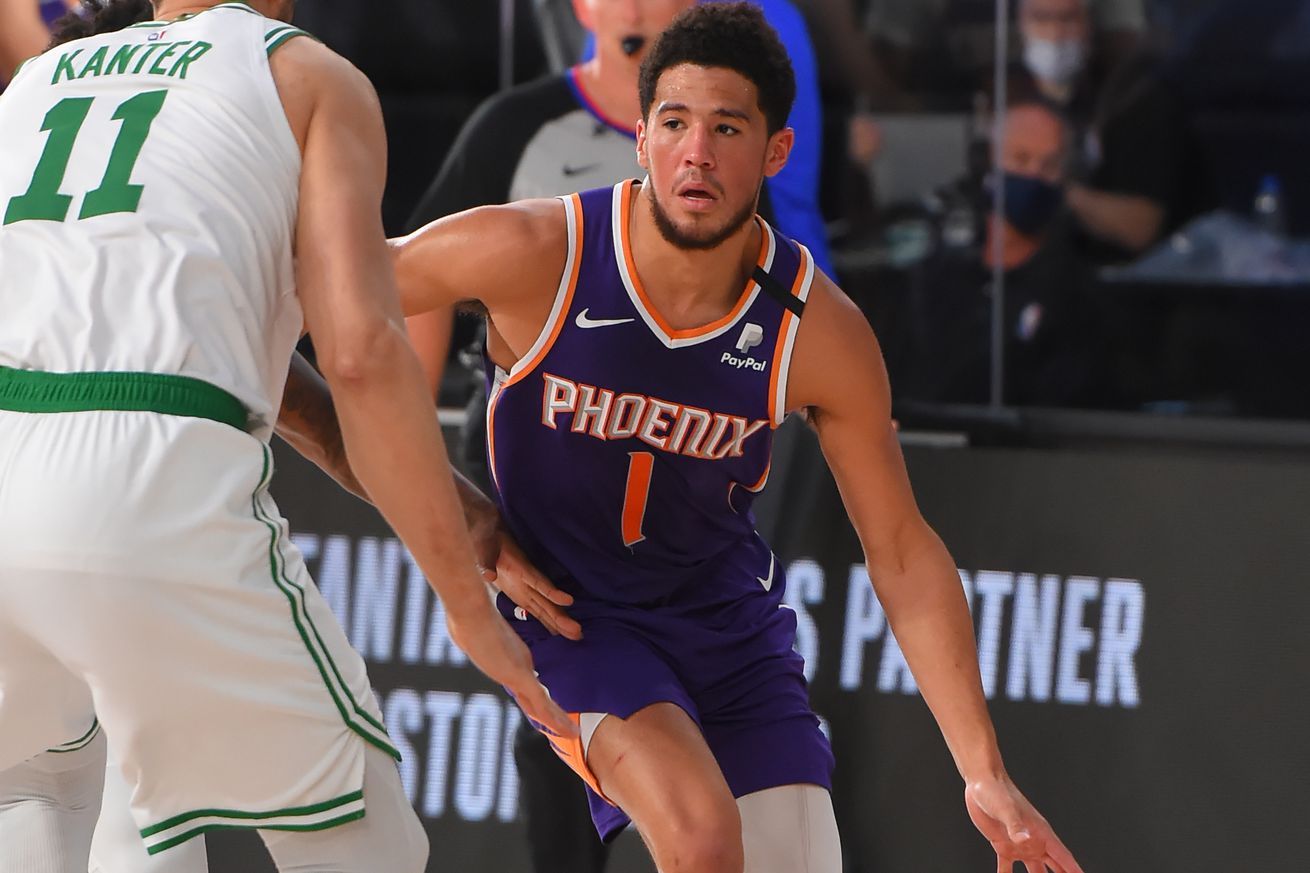 The Phoenix Suns All-Star Devin Booker showed that play-making is a breeze within the Suns offense in the first two scrimmage games, but he cannot get too loose with the ball.

The early first half of Thursday night’s game against the Utah Jazz showed us that Phoenix Suns All-Star Devin Booker is ready for this moment. The disregard for any defender and having the full scope in the offensive half-court was cake. Picking and choosing the correct shot or dishing it to an open teammate was immediate. That was the first half and I don’t want to become picky about a scrimmage game pulled right out of chaos.

But there were concerning moments in his game in the second half when the Jazz defense began to lock down and the Suns free flow offense had to adjust.

The past four years of not surrounding Booker with much talent is a blessing in disguise. What we have today is a play-making/ sharpshooting/ slashing shooting guard on our hands. His hands are raised from the grave marked “Ryan McDonough” and his mouth is gasping for air. Giving him a hand are Suns fans. He has formed a blissful alliance with Suns fans who respect him showing continued support for a poorly run organization.

With Booker gaining steam from this year’s All-Star replacement selection and now the granted access to the bubble, Suns fans wait for the miracle ending.

A miracle ending in Orlando can bring a lot of pressure to the Suns but it doesn’t always have to weigh on Booker’s shoulders.

What I saw in the second half of the first scrimmage game against the Jazz was a quick deflection of responsibility. The Jazz boast one of the best defenses in the NBA so maybe it is not really a big deal but for me it is. The ball handing and passes that were breezy in the first half became hesitant and unreliable.

Turnovers and miscues were not always on Booker and it became obvious that the team needs more time together to get things right. When the lane was closed the ball was forced and when he made decisions to cut, Mikal Bridges had no choice but to travel because of the lack of communication.

Thursdays Scrimmage game, a 101-88 win over the Jazz, showed that the team as a whole can hold their own. When the opposing defense begins to tighten, find the open man and stay patient. The passing lanes that were there in the first half will not be there in the second.

The second game for the Suns came against the Boston Celtics. Booker, in only 26 minutes of the game, led the with nine assists. The Celtics put on the pressure early and maintained a balance of a back-n-forth game, feeling like the final shot would win the game. But both teams pulled their starters in the 3rd quarter (after the Suns took a 74-70 lead) and left the benches in there the rest of the way through the 4th quarter.

You could still see a little hesitancy and discomfort in Booker’s game. The true challenge and what I am most focused on watching in the upcoming seeding games is how Booker will differ during stretches of important games in making the right play and not turning the ball over. Adjusting to players around him is the biggest struggle because they actually know what to do and are unselfish.

From Bridges to Dario Saric, the wing-men are there to help with pushing the ball to the rim and setting Deandre Ayton up for a mismatch or wide open look at the rim. Ayton, who already seems to be ready to move the ball to open teammates, continually creates better team play and a happy head coach in Monty Williams.

I feel like everything is set in place for the Suns to really make a run in Orlando. If that run happens and Booker is not the leader and taking the last shot, I am fine with that. Whatever helps the team to make the run. The opportunity is there for him, and adapting to the change of positive influences on the court will be a sight to see.