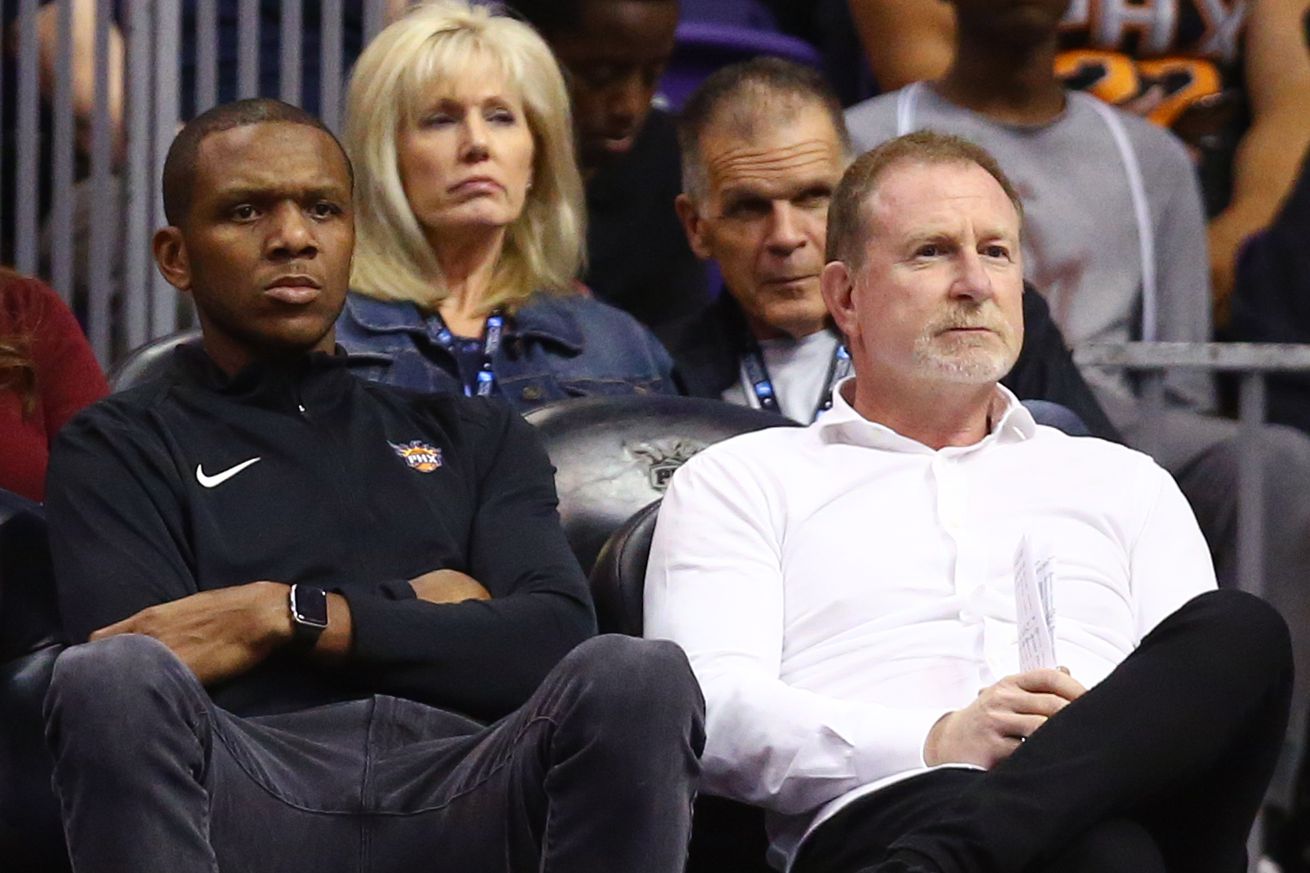 The Suns face a very important off season for a playoff-starved franchise, so of course the biggest concerns have to be with the owner and GM.

Phoenix Suns coach Monty Williams would be the first to tell you that we have way too many of his quotes to chew on for the next three months, only to later hold against him or praise him.

He laughs during media sessions when one of us says ‘__ days ago you said _______’ to lead into something along the lines of ‘how’s that going for you?’. It’s a good-natured laugh, but one full of wonder as well. For every time someone says they hang on his every word, which is a LOT of someones, Monty will laugh it off with ‘I’m really not that smart.’

A whole year’s worth of practice, shootaround, pregame and postgame media sessions give us too many quotes to use for/against him, but really all you need is that one 1.5 minute speech to his players at the end of their 8-0 Bubble run to know everything you need to know not only about Monty’s relationship with his players but even moreso his relationship with the moment at hand.

The absolute most important player Monty had reach this season was Devin Booker, who was entering his fifth NBA season as one of the league’s brightest young stars but with a frustrating reputation as someone whose production does not lead to winning.

Indeed, while the pandemic has made 2020 one of the worst years in memory on a lot of fronts, the aftermath may have been the best thing to happen to the Suns as a whole and Devin Booker himself.

Now the Suns have created a new identity under the spotlight of the Bubble in Orlando. First, the Suns won just enough to get Booker into the All-Star game, then went 8-0 with Devin Booker as an MVP candidate and first-team All-Bubble.

The Suns finished the eight-game Bubble season absolutely smoking their competition with a league-best +12.9 scoring margin and a league-wide wish that the Suns could qualify for the playoffs. They built a tsunami of fans among stat-nerds and casuals alike. So many of the media turned their Suns narrative from goats to GOATs it had my head spinning. Just do a google search for Suns news over the past two weeks and you’ll see bylines who never before had a good word to say but were now tripping over themselves to gush about their new favorite team.

These aren’t the Suns of old, indeed.

But are the new Suns here to stay, or are they just a flash in the pan?

“We got to get to the point where we control that,” Williams said to the team as they had to hope for a Blazers loss later that night. “You understand that? You want the kind of team that controls your own destiny. That’s our next step.”

The last time we ended a season on the rise, falling just short of a playoff berth, was in 2014. Remember that group? Goran Dragic and Eric Bledsoe were the headliners of an entire roster having career-best years for a rookie coach that finished second in Coach of the Year voting. That team’s playoff run ended the day before the last game of the season, and they went into the summer planning to build on that great foundation.

This time, Devin Booker and Deandre Ayton are the headliners of a roster largely having career-best years for a rookie coach that won the Coach of the Bubble award. The team’s playoff run didn’t end until six hours after their final game, when Caris Levert missed a jumper as time expired to give Portland the 8th and final seed in the West. Now they once again enter the off-season planning to build on this great foundation.

Let’s hope it’s not TOO familiar. That 2014 team sprung self-inflicted leaks almost immediately after the end of the season and never recovered. The surprise 48-win team responded with an angst-filled 39, then plummeted to average 22 over the next four seasons.

Let’s compare and contrast the 2014 offseason to this 2020 offseason.

Both the 2013-14 Suns and 2019-20 Suns featured a coach in his first year coaching a team coming off an embarrassing prior season. The coach was loved both publicly and privately, with a close relationship to the GM, best player and the community at large. Both had unexpected success leading to many happy faces around the locker room.

Unfortunately, Jeff Hornacek struggled in subsequent years because could not keep the camaraderie going when the going got tough. And he failed to manage players’ individual expectations of the same or greater roles in year two.

Monty Williams, on the other hand, has already dealt with tough breaks and losing streaks in year one and ended the year on the highest of highs. His players never splintered, and to the final day they praised Williams for his leadership.

The summer of 2014 will always be remembered for the foolish attempt to use a gob load of cap money to lure free agent LeBron James and even a buddy like Chris Bosh or Carmelo Anthony. The Suns had THAT much cap space.

They had so much space because the only guys the Suns had under contract for the next season were Goran Dragic ($7.5 million), Gerald Green ($3.5) and the rookie-contract guys (Markieff Morris, Marcus Morris, Miles Plumlee, Alex Len, Archie Goodwin).

If you want to take a walk down memory lane, check out this article I wrote in April 2014 absolutely gushing about the wonderful Suns future, partly because of their cap flexibility and asset collection (six first round picks over the next three years).

The Suns did good things that summer in a vacuum, but on the whole it all worked out poorly.

They paid some of the free agents (Bledsoe and Tucker) while letting others (Frye and Ish) walk away in a huff. Then they spent the rest of the summer mucking up the works, marginalizing future All-Star Dragic by signing future All-Star Isaiah Thomas as third guard and maxing out Bledsoe, then extending the Morrii in an ill-fated attempt to keep everyone happy but ended up screwing with the team hierarchy.

The Suns had wildly succeeded with Dragic and Frye in leadership roles, so they of course switched the leadership mantle the next year to Bledsoe and the Morrii… to much worse results. All while bringing in a wannabe starter with a chip on his shoulder in Isaiah Thomas.

How can the Suns avoid such pitfalls this time around?

First of all, none of the 2020 starters are up for new deals. All five of Devin Booker, Mikal Bridges, Deandre Ayton, Cameron Johnson and Ricky Rubio have 2-4 years of guaranteed contracts remaining. That’s the top five in minutes played in the 8-0 Bubble.

Rubio is the team’s quiet leader, while Booker is the leader on the court and by example. Booker has already made the All-Star game and will be in the running every year, so I don’t see the Suns top dog role being usurped. However, the second (Rubio) and third (Baynes?) loudest voices might get shuffled if Jones isn’t careful.

But then Jones is not McDonough. Jones brought in Rubio, Baynes, Saric and company specifically because of their leadership skills. He can’t afford to change tacks now, whether he stays with the same guys or swaps them out.

Power struggle from the bench

In the fall of 2014, Isaiah Thomas and Gerald Green both came across as surly or at least unsatisfied with their roles even though the team was still winning games. Thomas got plenty of minutes but wanted to start while Green lost ground on minutes from the prior year because of Thomas’ arrival.

What Jones and Monty do with Dario Saric and Kelly Oubre Jr. could make or break the 2020-21 season. The Suns now have seven different players believing they should be starters next season. While Oubre and Saric played nice this season, they may run out of patience over time with the will-he-wont-he-start dilemma.

If Jones brings back both Saric and Oubre, then it’s up to Monty to keep them happy. This past season, eight different players started at least 13 of 73 games, and seven started at least 28 games. So they could be sold on the opportunity to compete for a starting position, with the scenario being an alternate in case of injury, non-performance or DNP. Maybe Monty can do what Hornacek couldn’t.

The good news is that neither Bridges nor Cam Johnson are likely to grumble about being demoted back to the bench, if that’s what happens at times. The fans will grouse more than they will!

The other issue is not losing the spirit of the deeper bench. The Suns undervalued Ish Smith’s high energy impact in a small role, and would do well not to fall into the same trap again. You don’t need to keep Jevon Carter and Cameron Payne per se, but you need to replace their swagger if you don’t.

The Suns have a lot of work to do this off-season.

We still have no idea what the salary cap will look like for 2020-21 considering the incredible loss of income from first China and then the work stoppage costing the league billions in revenue and billions more in the next season to come.

Could be that no team has open cap space for free agent additions, and it’s a mediocre class anyway. Which might be a secretly great thing for the Suns, because there is less incentive for big swings in free agency distracting the team from what is already working.

Maybe the best option is simply to run it back with as much of the same top-eight as possible. which narrows down Jones’ primary issues to the contract status and mental health of Dario Saric and Kelly Oubre Jr.