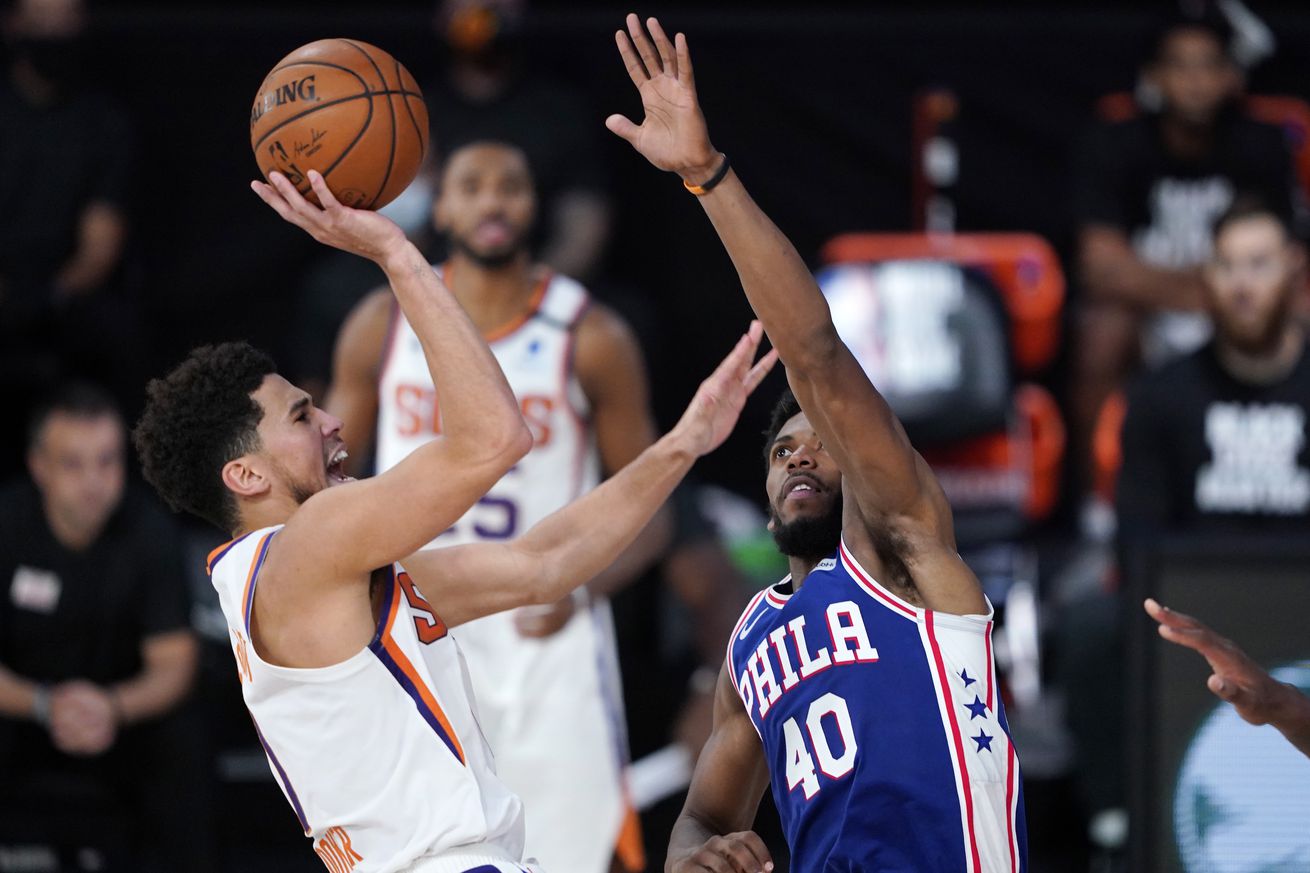 Devin’s Bubble performance pushed him to his highest 2K rating to date. But is it high enough? (Hint: No)

Imagine you woke up, put on a pot of Folgers (which is the best part of waking up), sat at the kitchen table, and opened your work email. While sleepily browsing through the numerous tasks before you, a message from a co-worker catches your eye. It is an email that informs you of the observations a third-party talent evaluator has provided of your work performance, given on a scale of 99.

You have received an 88.

The coffee is done and your pour it into your “2020 All-Star” double-walled insulated cup the company provided you for your efforts earlier this year. You ponder as to how this metric was calculated. I mean, you’ve been with the company for 5 years, you’ve continued to excel at your position, and you crushed it during your last 8 days at work. Some would say you went 8-0.

How would you feel? Is that 88 a true reflection of your performance? Or was there too much subjectivity? Did the popularity contest win out?

This is the life of an NBA player, where the basketball video game NBA2K determines their on-the-court value on a 1 to 99 scale. It’s enough to make you spill your coffee on your shirt. But hey, you’re working from home these days, so you won’t even change.

The conclusion of the 2019-20 season provided NBA 2K an opportunity to refresh their player ratings in preparation for the upcoming season. The Suns’ Devin Booker, who ended the NBA2K20 season as an 86 overall, saw his overall rating move to an 88 overall. He was originally an 87 overall when the game was first released on September 5, 2020.

This places him as the#6 overall shooting guard in the game and #23 overall player.

Devin Booker makes a jump after the Bubble #2KRatings pic.twitter.com/MMjl9gFMtv

Seeing as the ratings and the system that comprises them are consistently under scrutiny (see John Wall’s reaction to his NBA2K17 rating) I thought it’d be time to put the Booker rating under a microscope and see if @Ronnie2K got it right. 88 sounds fair for a guy who started as a 72 in NBA2k16, right?

There are numerous components that generate the final overall rating. When combined, these factors attempt to remove as much bias as possible. By breaking each player and their performance into numerous sub-categories, the NBA2K team can create a player from the ground up.

Attributes (all with their micro-ratings) such as inside scoring, outside scoring, athleticism, defending, playmaking, rebounding, generate the end number that players covet.

Badges also contribute to the players rating, although we won’t delve into those in this piece. These are abilities activated during gameplay that assist in determining your success rate as you play.

Suns fans continue to be outraged with the fact that Devin Booker has not reached the 90 overall designation. He is an All-Star. He is a premier scorer. But is he a 90? Knowing that 2K takes into account all aspects of of a players game, has Book earned the right to be mention with other players in the 90 Club?

Let’s geek out and break down the ratings.

All ratings are via 2kratings.com, other metrics are via BBall-Index.com.

The first thing I notice in this category is all of the green. Green is good.

Filling it up from the mid-range/outside is what Devin Booker does best. That and hitting free throws. You know this. I know this. And it appears NBA2K knows this as well. Booker had a 61.8% true shooting percentage this past season, which is good enough for an A- (88%tile). Couple that with his 91.9% free-throw percentage in 2019-20 and it is clear 2K took notice (although his 92 Free Throw rating is 4th best, behind Brad Wanamaker, Stephen Curry, and Kyrie Irving).

Devin receives high marks for his ‘Offensive Consistency’ and ‘Shot IQ’ as well. Makes sense, right? When you are making shots over Paul George and Kawhi Leonard, you’ll should get some respect.

Booker’s 82 overall three-point rating is accurate as well, seeing as he shot 35.4% from deep this past season. If you look at his actual performance from beyond the arc, it paints a picture of someone who can shoot but is heavily contested. Devin shoots:

All put him in the 65%tile-ish range relative to the league. His openness rating is -1.50 which qualifies as an F. Yeah, it is hard for Booker to get open, especially from deep. His 82 three-point 2K rating is good for 88th in the game. I’ll allow it.

What I find interesting is the rating for Booker from the mid-range. 83? Tomas Satoransky has a higher mid-range score in the game. Devin ranks 82nd in the game in this metric. Maybe I’m crazy for thinking that this should be higher?

When it comes to overall finishing, Devin Booker rates as an A- and in the 84%tile per B-Ball Index. His finishing rim rate is +1.3 (91%tile) and his adjusted-drives-per-75-possessions is 22.1 (91%tile). His 94 overall layup score accurately reflects his ability to finish at the rim. He is #10 in NBA2K in this area.

So why is his inside scoring overall so incredibly low? Perhaps it is due to his contact finish rate of 18% (35%tile). Maybe it is because that, when in the post, Booker goes to his jumper 73% of the time (so maybe the Post Fade score should be higher than 38), to the rim 22% of the time, and tries out his hook 4% of the time.

Or it due to a sub-par dunk rating.

Booker might not be known as a high-flyer or savage dunk artist, but he can throw it down if need be. He has done his fair share of posterizations over the years. A 30 for standing dunk? Okay. But a mere 50 for driving dunk? Zion Williamson tops that 2K ratings with a 97 overall. Donovan Mitchell has a 92. But if 2K is dishing out an 80 for T.J. Warren, then a 50 is disrespectful to Devin Booker.

How soon Ronnie2k must forget.

This is an “enough is enough” dunk by Devin Booker. #Suns up 95-84. pic.twitter.com/ur8f7Eviee

I have zero gripes about this area of Booker’s rating.

Although Booker has averaged 3.6 rebounds-per-game in his career and had 4.2 last season, it isn’t an area the Suns have relied on Booker to excel in. Get out in space, score, and make us happy. Leave the boards for the big guys.

Clearly the 43 overall isn’t an aberration. It is a proper representation of his skill set.

If you are arguing that his 88 overall should be higher, you might want to avoid bringing up this attribute. It won’t help you make your case.

Not many players are truly known for their defense much these days. My initial assumption in looking at these metrics is they got it right. Booker isn’t a plus defender. He isn’t someone who locks down anyone. He’s better one-on-one with the Jenner’s than he is shutting down opposing two guards.

But then I see the 55. Therefore I question it.

When you look at the archetypes of the players Booker defends, he is primarily matched up with secondary creators (guards who have lower isolation rates as the Primary Ball Handlers, but have lower estimated initiation rates for the offense). Book spends 83% of defensive possessions on these players. So how does he do?

Interior defense is an area of opportunity for Booker. His rim deterrence is a C (52%tile) and his percent-of-shots-contested is an F (13%tile). Booker makes 0.2 blocks-per-75-possessions (F, 15%tile). So a 38 on interior defense and a 40 for blocks are metrics he has earned. That puts him in the same 2K category as John Wall, Evan Fournier, and Emmanuel Mudiay.

As for perimeter defense, Booker received a 70. He posted a D for three-point-contests-per-75-possessions (22%tile) this past season and a C for shot profile disruption (52%tile). James Harden, Jamal Murray, and Devonte’ Graham all earned a 70 as well.

I have questioned the 55. And it is accurate, if not kind.

It is hard to find the B-Ball Index advanced metrics to compare to NBA2K for these attributes. Therefore I will compare his scored against his peers and make subjective comments about those.

How fast is Booker? According to NBA2k he is as fast as Karl Anthony-Towns, Pascal Siakim, Bradley Beal, and Goran Dragic. I know D. Book isn’t a burner, but I feel he should’ve received a little love in this category. His 79 acceleration (similar to Paul George, Ricky Rubio, and Eric Gordon) makes up for his ability to be quick, but he is young, has fresh legs, and can get up and down the court easily. Both of these should be a little higher.

I believe that 81 for overall durability is accurate. Booker’s fellow teammate, Deandre Ayton, received the same score, as did Jimmy Butler, Rudy Golbert, and Eric Bledsoe. All of the above have little nagging injuries here and there, so 2K put them all in the “Ouch, it hurts. Sometimes” group at 81.

How strong is Booker? I don’t know; I’ve never seen him bench press. I know that he has the strength and agility to carve his way into the lane and force the issue. His 42 compares to Brandon Ingram, Ja Morant, and Fred VanVleet. That doesn’t hurt my feelings.

His highest rating in the Athleticism category, his stamina, is well earned at 95. Devin rates in the 99%tile in the league in minutes played, 86% above the average. He gets on the court and stays there.

Overall, although I believe from an eye test standpoint that he should be higher than a 73, when compared to others in this category, it is a proper depiction of his game.

This is another area where I feel Devin Booker could get some love. The term “Point Book” exists for a reason as Devin has displayed the ability to run effectively an offense.

B-Ball Index and the advanced metrics are extremely kind to Booker:

By every advanced metric, the playmaking story of Devin Booker ends with an A. He takes chances but he garners results. NBA2K does not reward Book for his ability in this area. At all.

Devin Booker with another insane pass that he made look easy but this time Rubio made it. The passing improvement this year is crazy. pic.twitter.com/Eo2oylFoQN

This is the number one area you can complain about the Booker build. He is robbed by NBA2K for his effectiveness and efficiency as a playmaker. You bump these metrics up and you have a 90 overall Devin Booker.

Players focus on the end number. It is a source of pride or the origin of motivation. Devin Booker, and avid gamer and winner of the NBA2K Players Tournament this past April, is undoubtedly aware of his rating. This should bode well for the Phoenix Suns this next season as he attempts to join the illustrious 2K 90 Club.

The 90 Club is hard to crack, however. Kyrie Irving, the lowest rated 90 overall player, is ranked #15 in the game. Other players rated 90 include KAT, Nikola Jokic, and Jayson Tatum.

Do I think Booker should replace Tatum on this list? With bias, I answer yes. Should Booker be rated higher? Yes. His offensive abilities are not complete and his playmaking ability is vastly underrated in the game. Is he better than fellow 88er’s Trae Young, Donovan Mitchell, and an aging Chris Paul? Yes.

Hopefully the 2K Team and digital marketing director Ronnie 2K gives this a read and realizes that the advanced metrics compared to the rest of the league are the reasons why Devin Booker should be rated higher.

Do the right thing Ronnie.