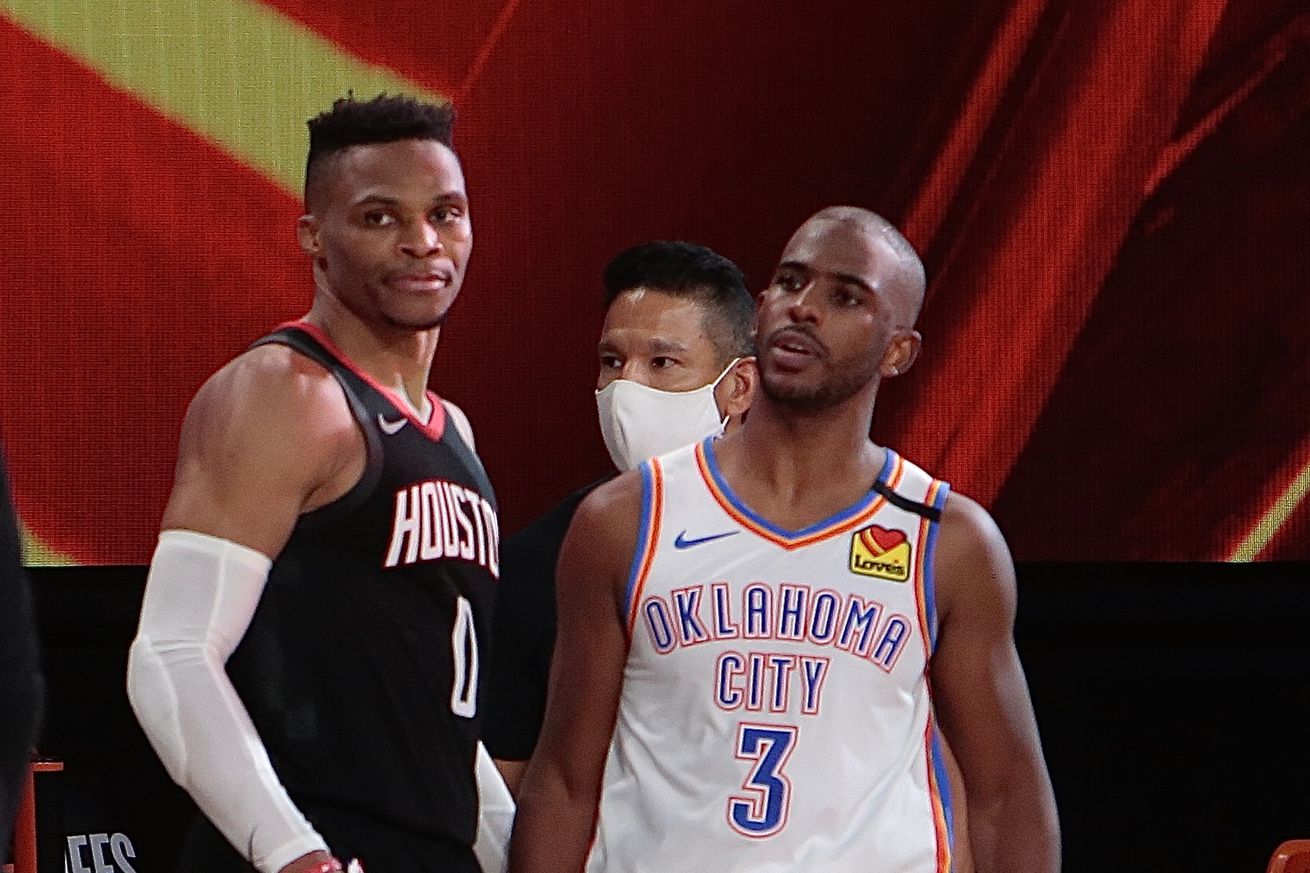 The Thunder fleeced the teams Paul George and Russell Westbrook wanted to go to last year.

By all accounts, the Oklahoma City Thunder are supportive of helping Chris Paul get to his next team.

“The Thunder are in the back seat of this trade,” said ESPN’s Brian Windhorst on Fox Sports 910 in Phoenix this week. “It’s almost like a quasi-free agency. It’s really the Suns and Chris Paul who have to work it out with each other. This is something the Thunder did last year with Paul George and the Clippers and Russell Westbrook and the Rockets.”

Windhorst dismissed the idea that Paul or the Thunder are just using the Suns for leverage to get a better offer elsewhere. Both the Suns and the Thunder are notoriously tight-lipped about trade negotiations, so why would it leak now?

“I’m not saying that at some point the leverage wasn’t coming in, but just so you know this wasn’t leaked to me by somebody saying ‘get this out here.’ There are times when that does happen, but that was not the case here.”

So, when IS the leverage coming in? And will it be applied to the Suns, who are now expected to close this deal. Chris Paul wants it. Devin Booker wants it. You don’t say ‘thanks but no thanks’ when an All-NBA player wants to join your franchise, knowing you’ve missed the playoffs ten straight years.

“Devin Booker is very well aware of this and wants this to get done,” Windhorst added.

The onus is on the Suns to close this deal. But who are they actually dealing with?

A year ago, the Oklahoma City Thunder fell short in the playoffs, and found their best players wanting to jump ship for even better teams.

Thunder GM Sam Presti saw an opportunity for a quick rebuild and played along. He negotiated behind the scenes to get Russell Westbrook — two years removed from winning league MVP — a chance to play with his buddy James Harden in Houston. At the same time, he had talks with six-time All-Star Paul George’s preferred destination to join Kawhi Leonard in Los Angeles with the Clippers.

Presti was over a barrel. Once he decided to help his stars get to the new cities of their choice, he had lost some negotiating leverage in process, right?

Nah. He STILL extracted a king’s ransom for those two All-Stars anyway.

For Russell Westbrook, he got back an All-Star and two first round picks with light protections.

But that’s chump change compared to what he got for Paul George, which included a potential future All-Star, a great starter and five — count em, FIVE — more first round picks with light protections.

All told, Presti got an All-Star, two more starters and SEVEN upcoming first round picks plus four pick swap opportunities for his pair of All-Stars.

Gulp. The only saving grace for the Rockets and Clippers is that they mostly got top-4 protection on those picks so they wouldn’t end up like the Nets (Jayson Tatum and Jaylen Brown back to back years at No. 3).

Now Sam Presti’s eyes are on the Suns, who Chris Paul tabbed as his preferred destination. Any hopes that OKC will be happy a package of only Kelly Oubre Jr. and Ricky Rubio must be made with eyes closed and hands clasped. And you’d better be rocking back and forth in that chair, too.

Assuming the Suns absolutely refuse to include any of their good young players (Deandre Ayton, Mikal Bridges, Cameron Johnson) for a 35-year old with most likely only 1-2 good years left, I expect Presti will demand picks back in a Chris Paul trade. And not just one first round pick. A couple, if not a few.

But where will those first round picks come from?

Now you know why the Suns are trying to engage additional teams in the mix, likely to swap Ricky Rubio or Kelly Oubre Jr. for first rounders which can then be handed to OKC. We have heard of Golden State and Dallas being interested.

My guess is the Thunder want the highest pick possible this year, since they have so many future ones already and they only have the 25th overall pick in next year’s draft. The Suns might have to surrender the No. 10 overall pick in the deal, unless they can get a higher one from another team for Rubio or Oubre.

Could Golden State offer the No. 2 for Oubre and the No. 10? Does Dallas want Oubre for the 18th pick? Could the Suns swap Ty Jerome — who was just taken 24th a year ago — to another team for a future low first round pick, which could be routed to OKC?

This is why you hear that the involved players — Paul, Oubre and Rubio — are not a holdup here. They are already part of the deal.

What’s at stake is draft compensation. The Suns don’t want to give any up. The Thunder want multiple.

Let’s see how it all shakes out, but don’t underestimate OKC Thunder GM Sam Presti’s negotiating talents. Chris Paul is their only remaining big trade chip. Danilo Gallinari is an unrestricted free agent and Dennis Schroder and Steven Adams only have one year left on their deals.

We are now playing a game of chicken on the draft picks.

“Chris Paul is a dealmaker, guys,” Windhorst says. “Now that that’s done (the CBA), he’s going to switch gears to where he’s going to play next season.”

On the other hand, the Suns have Chris Paul on their side to make sure a deal gets done. Paul once organized his trade out of OKC, and as the head of the players association he just negotiated a pair of very complicated mid-pandemic deals with the NBA to restart in a Bubble and now to kick off the 2020-21 season.