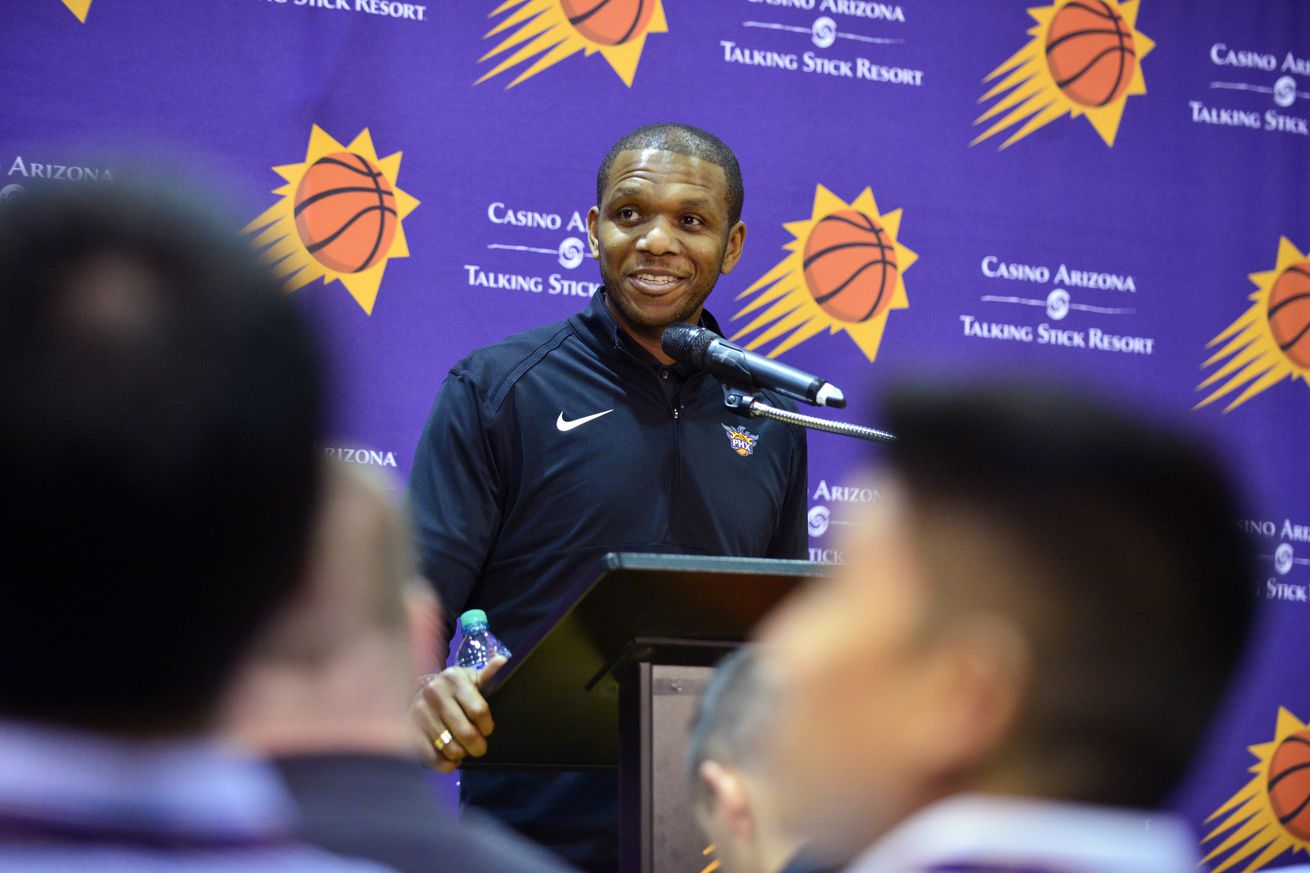 Focusing on the young talent at hand, James Jones gives his thoughts on how the Suns will move forward into the off-season.

Now that the logo cards are flipped and the NBA lottery is a wrap, the Phoenix Suns will begin the evaluate the best player to take at #10.

Suns General Manager, James Jones, took questions in the Suns media availability, giving us a look at how he plans to manage the strange off-season.

Free agency and the draft will be a different creature, having to deal with the pandemic. But first James gives his overall reaction to the results of the lottery and how he approached the night going into the draft.

“Our approach to the draft hasn’t changed, going into the night we expected to get the 10th pick and we ended up with the 10th pick,” Jones said. “It would have been good to move up in the lottery, but given where we are, we will be able to find a really good player at 10. Someone that can add to this team’s capacity and help us continue our strides forward.”

With mock drafts flowing like the wind and every player dissected, the spot at #10 can really go a lot of ways. For James, he takes things as they come and looks to trust his process in finding the right fit.

“Controlling what we can control right now.” James continues. “We had to just rely on what we see. We have to go back to the game film and we watched a lot of it to kind of parse out what these guys can bring to our team and what they can add to our team. I’m confident as we get closer to the draft, there will be ways for us as an organization or teams as a whole to get closer to the players. It may not be draft workouts, but watching individual workouts. Chopping down most recent game footage. It will be a challenge and you’ll just have to rely on what you see and worry less about what you project a guy will be able to do.”

After finishing 8-0 in the Bubble, keeping that momentum might be the most difficult part heading into next season. But with the group of players James has, he didn’t seem too worried about the long layoff, again, until next season.

“We have guys that love to play and love to hoop,” James says. “If you give them free time they work on their crafts. I think our practice facility will play a big role in allowing us to maximize this time away from organized activity.”

The Suns roster seems almost full of talent from top to bottom but still have a few holes to fill. How will James evaluate players and what is he looking for when adding to the depth-chart?

“Our system is a dynamic system,” James talks about positive changes on the court. “If you watch the minor improvements that we made in the Bubble. Our focus on rebounding, offensive rebounding, moving the ball, sharing the ball, being a low turnover team.

“All those things require a guys that can think on their feet. Guys that have great ball skills. Not necessarily great ball handing skills, but knowing how to move their body and how to move the ball and how to share the game. It takes a level of basketball IQ and maturity.”

James also added, “We’ve just decided that every day we’re going to continue to watch the guys that fit our style of play and play for coach Monty.”

Coach Monty Williams seems to be on the same page. Jones, like last years draft and free agency, will continue to add players that can help right away. Since taking 19-year old Deandre Ayton No. 1 overall in 2018, the Suns have drafted experienced college players in Mikal Bridges, Cameron Johnson and Ty Jerome, who were all 22 years old at the time of the draft.

“Always looking for experience,” Jones said. “We’re always looking for capacity. I don’t go based on age. My experience that the older players are the more seasoned veteran players tend to posses a greater capacity from day one to contribute to your team.”

The biggest challenge for James and the Suns this off-season? From player evaluation in the draft and currently on the roster, decision making from afar would seem to be difficult but not to Jones.

“Its a challenge but to be honest, not so much.” James continues, “When you’re drafting in the lottery very few players want to do group workouts, they prefer to do individual workouts. I think the biggest challenge is these players won’t have the ability to play 5-on-5 pick up basketball to run in a gym with other draftees and other free agents and stay sharp from a timing prospective.”

Looking like a much improved Suns team in the bubble, to compare the first part of the season to the second… James replies, “We had three seasons. We had a season without Deandre. We had a season with Deandre and no Frank Kaminsky and no Aron Baynes. We had a bubble with another mix of players but primarily our young players had a chance to play together.”

Deandre Ayton and the young core finally got some real reps in together but James points out the bigger picture:

“We’ve had three mini-seasons, but on the whole I think our understanding of our concepts and our consistency was far greater in the Bubble than it had been prior.”

Exiting the bubble with more focus and consistency, leads into an off-season that can help the Suns make the playoffs with the right additions.