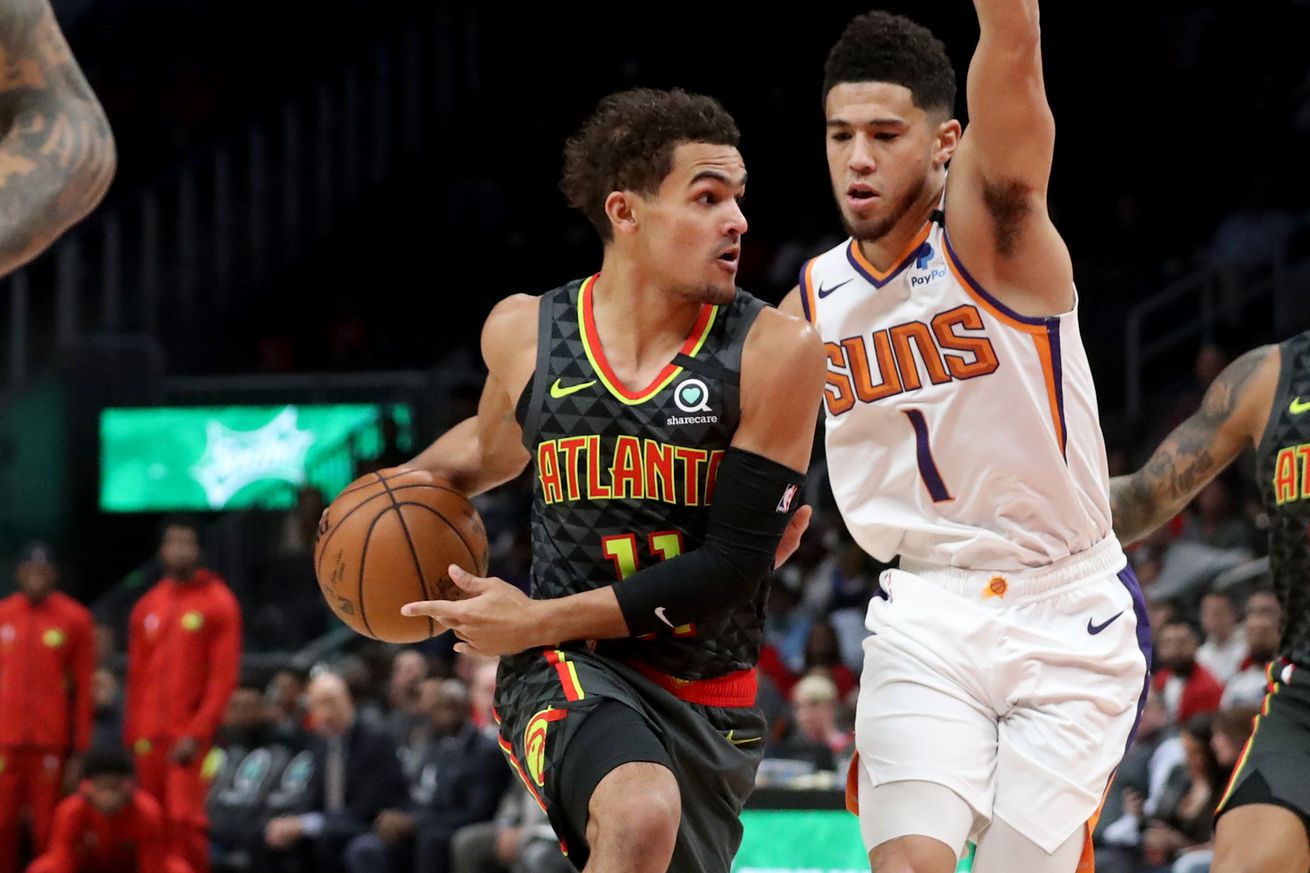 Would the Suns take an All-Star like Trae Young or Karl-Anthony Towns? Or a free-agent-to-be?

The NBA does not want gimmicks or exhibitions when play resumes next month in a run-up to the playoffs and the crowning of a true champion. Hence, the lack of creativity in the format of play in the Orlando “bubble.”

But the novel coronavirus is still an unchecked pandemic. It didn’t disappear as some had hoped in the warmer months. Even creating an insulated, contained environment for a portion of the league to resume play, you’re still talking about attempting to contain a respiratory virus among at least 700 players, coaches, staff, media and families over two months.

What if players get infected with COVID-19, forcing two-week quarantines and causing a team or teams to lose a playoff push from a decimated roster? The Suns have already suffered a string of injuries this year — sometimes being down six rotation players at once — but the presence of the pandemic could make things even worse.

Expanded rosters are being considered, though any expansion must be balanced against the danger of even more air-breathing humans being added to the bubble.

If the Suns lose a big-time player, could Jared Harper or Tariq Owens make a difference? No. But that’s all we have left on the street these days. Everyone else of substance is locked into contracts here and overseas.

What if the NBA decides to do ONE crazy thing to excite fans of those eight teams being left home?

What if the NBA allows the 22 bubble teams to pluck players from non-bubble teams?

This is total fantasy, folks. No one has suggested this. But let’s imagine, for a moment, that every bubble team gets to draft a player from a non-bubble team, and that the selection process goes from worst to best like any draft.

The Suns, in that case, would be able to draft second overall.

The eight teams from whom players could be plucked: Warriors and Timberwolves in the West, and the Cavaliers, Hawks, Pistons, Knicks, Bulls and Hornets in the East.

Remember that this is only for the next eight games plus playoffs, then the player returns to their team. Not a futures contract or anything like that. It’s only for the Orlando bubble.

Is there anyone that would make the Suns demonstrably better for this 8-game run? No other roster changes are coming — unless you count a G-league convert in case of emergency — so this IS the only splash the Suns could hope for.

Stephen Curry gets taken #1 overall by the Wizards, of course

The Wizards are drafting first, though, so the only league MVP available in this fantasy draft would be the now-healthy Stephen Curry.

Of course the Wiz pair Steph with Bradley Beal and suddenly the 7th and 8th spots in the East are quaking in their boots. Steph would help the Wiz up their offense from mid-pack to closer to top of the heap, but wouldn’t do much for their league-worst defense. Still. Could be exciting suddenly in DC.

Who should the Suns take second: Dray, KAT, Love or Trae?

If you believe the Suns have any chance at all to make the playoffs by going 7-1 or better and then could beat the Grizzlies twice in a row just to play the Lakers in the first round, then you’re excited about this draft.

Should they add Hawks PG Trae Young to pair with Booker to form a 60-point back court? Or should they shore up the defense with all-league defender Draymond Green next to Deandre Ayton? Or stretch out the floor with Kevin Love or Karl-Anthony Towns?

I know this seems weird to describe Towns as merely a floor-stretcher, but added to a lineup next to the defensively-improving Ayton and you can start to imagine Towns being the Suns’ Sir Charles with an unconscious three point stroke. Why in the world am I excited about watching this pairing? I shouldn’t be, but I am.

Trae and KAT are All-Stars. Dray and K-Love are World Champs. Any of these four would make the Suns a ton more fun to watch in eight games. There’s some other nice names on the list of available players, but none are of the caliber of these four.

Other names available from the eight non-bubble teams include:

Anyone look more interesting than Trae, KAT, Dray or Love? Nope. Not for an eight-game playoff push, anyway.

Which leads me to the question: where would Booker, Ayton, Rubio, Oubre, Bridges and Baynes, if not also Dario and others, rank on this ‘expansion’ list if they hadn’t gotten a bubble invite? How many Suns would get plucked in an expansion draft by the other 22 teams? I daresay a great number of them.

Or the OTHER route

The Suns could go an alternate route: pick a player that is a free agent this offseason, to potentially “sell” him on his fit with the Suns.

While all the other players go right back to their team, there are a few players here who are free agents — restricted or otherwise — that will be on the market in November: Tristan Thompson (UFA), Christian Wood (UFA) and Malik Beasley (RFA) are players on the awful-eight who will be looking for new teams in a few months.

They aren’t great fits with the current Suns squad, but they’re probably the BEST fits among the non-bubble who are becoming free agents.

What strikes me here? How shallow the bad teams are. They don’t have depth of real talent in the first place to climb quickly out of the cellar (unless you’re sold on Trae/Collins pairing), so there’s not much to pick from here for the Suns.

To me, I don’t think any addition makes the Suns THAT much closer to making the playoffs this year.

So why not nab someone like Christian Wood for an eight-game run to see if he falls in love with the organization?

Wood, a 6’10” power forward with more altheticism than skillset until this year, is a very interesting player. He took a LONG time to develop — was out of the league recently — but now at age 24 will be one of the most coveted unrestricted free agents on the market this winter (free agency is tentatively slated for October 18).

He originally went undrafted in 2015, then had short runs with a number of organizations, never appearing in more than 21 games in the regular season his first three years. But then he had a great 8-game finish with the Pelicans in 2019 (16.9 points, 7.9 rebounds) that led to a waiver claim by Detroit.

In 62 games with the Pistons this year, Wood averaged 13 points in 21 minutes a game. But once Andre Drummond was traded, Wood exploded for post-All Star averages of 24 points, 9.6 rebounds and 1.9 assists in 9 games at almost 35 minutes a game.

What does he do, all of a sudden? Watch his highlights here.

If he’s so good, how has Wood had one good stretch in a four year career?

He was too skinny for a long time before developing enough strength to hold in the league. No one drafted him despite a productive sophomore year in college. He even played one summer league with the Suns two summers ago but couldn’t make the team. Over four years post-college, Wood only appeared in 43 NBA games. Forty-three. For four different franchises.

The Wood we have now is a good player, though maybe not the star he flashed after Drummond was traded. He can shoot the three, dunk, drive through traffic to finish with a dunk, rebound a bit and generally stuff the stat sheet.

I’d like to see a “test drive” with the Suns before he hits the market in late October.