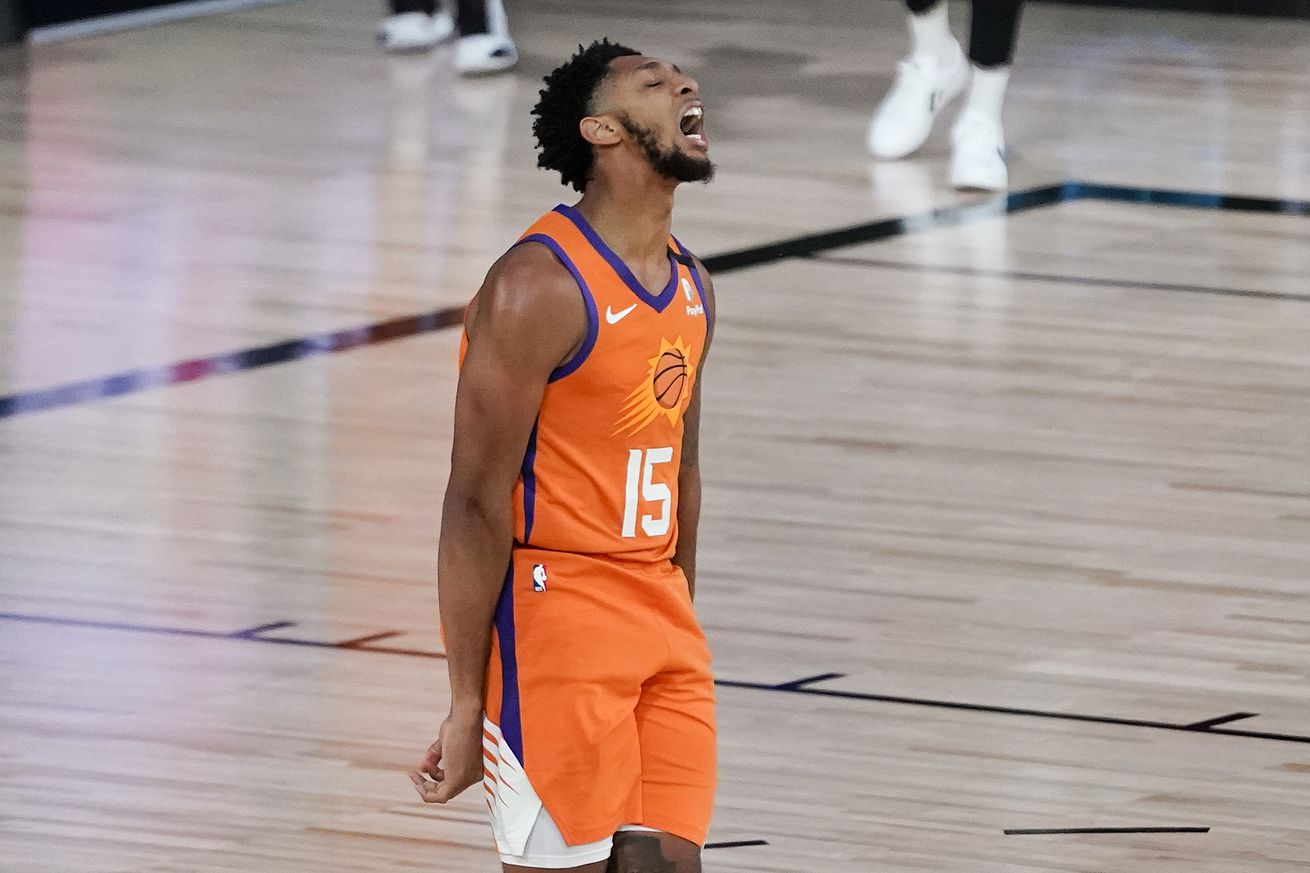 The Phoenix Suns overcome a 15-point deficit to go to 2-0 in the bubble.

How exciting has it been to scoreboard watch? It has been years in which I’ve watched so much basketball, routing for the outcomes to align with the goals of the Phoenix Suns. It kind of makes you want to dance. I think was feeling the same way prior to the match up on Sunday night with the Mavs. And it appears so was Deandre Ayton…

Got me in my feelings pic.twitter.com/TOXHNYL8Si

Mikal Bridges has chosen to wear “Respect Us” on the back of his jersey as a part of the social justice movement within the NBA. He is gaining respect more and more with each game and Mikal had no issue introducing himself defensively to Luka Doncic, blocking two of his first quarter attempts.

You couldn’t help but get excited at the start of this game. Bridges’ defensive intensity appeared to be a tone setter. Yet these early takes to the bucket by Doncic were a precursor of Dallas’ strategy on the night: force the issue on the interior.

The Mavericks, a team that attempts 41.6 three-pointers per game, found themselves scoring at will inside the paint in the first half. See the little blue dots? That is the Mavs shot chart through two quarters.

Not only were they attacking the depleted Suns interior (no Aron Baynes in this game and Kaminsky is a center only by height, not skillset), but they were racking up fouls in the process. Ayton went out with 8:13 left in the second with 3 personal fouls, forcing Monty to play Dario Saric at the five. Mikal Bridges exited with 3:57 left in the second after picking up his third. As the horn sounded to end the first half, Devin Booker had 4 personal fouls as well.

It felt as if it was “don’t breathe on Luka” night at the ESPN Wide World of Sports Complex in Orlando. The second-year guard set up camp at the free throw line in the first half, taking a total of 12 of Dallas’ 24 shots from the charity stripe.

The Suns as a team had 14 attempts.

Booker was whistled for two lane violations in the first half, and it was clear that he was upset following the second call. Devin turned on “I’m pissed” mode and began showcasing one fact: no one one the Mas can guard him. He ended the first half with 19 points on 6-11 from the field. (note: following the second lane violation, Booker scored 12 points in 8 minutes).

Cam Johnson continued to display offensive versatility, as he added 13 points and 8 rebounds in the first half. Mikal, conversely, felt the affects of trying to guard Luka on the defensive end. He ended the first half with 0 points on 0-5 shooting.

The second half began like the first, with Mikal making impressive defensive stops that make Suns fans salivate.

With 8:25 left in the 3rd we waved ‘good-bye’ to Deandre Ayton as Luka drew two more quick fouls on the fellow 2018 NBA Draft pick. He sat headed to the bench with 5 fouls. We would have to face this uphill battle without him.

But that’s okay, I guess, we have Devin Boo-

On a loose ball with 7:28 left in the third, Booker was tagged with his 5th. Eddie Johnson stated it eloquently, “it’s an art learning to play in foul trouble”. The young players received fouls that came out of frustration and emotion. It is something they must learn to do better.

You are the last team in the Western Conference, you have the longest odds to make the playoffs, and your two best scoring threats are sitting on the bench with 5 fouls each half way through the third.

The Suns promptly responded with a 14-1 run to take the lead, 84-82. An impressive 3rd quarter battle ensued, led by Cam Johnson and the duo of Jevon Carter and Cameron Payne. Down 90-87, Carter made a 26-foot three ball. Following a long miss by Doncic (he loves taking those step-back threes), Payne nailed a three. Delon Wright missed for Dallas, so what did Cam Payne do? Hit another three ball.

A quarter that began with whistles and frustration, seeing the Suns lose two stars to foul trouble, ended with the Suns outscoring Dallas 36-19 and leading 96-92.

The Mavs started the fourth living up to their three-pointing shooting reputation. They were firing at will. The issue? They were missing. The began the quarter 0-5 from deep, and 0-14 in the second half. Meanwhile Dario Saric was displaying his footwork on the block, his ’Point Dario’ abilities in transition, and his downtown stroke, pushing the lead to 7 points, 105-98, with 7:34 to go.

The Suns have yet to play true meaningful minutes this season. The final minutes of this game were their first chance this young team had feeling that type of pressure, to know what the weight of each possession consists of, to fight for a victory that has meaning.

How would they respond when the Mavs closed to within 2 points with just under 4 minutes to go? By the skin of their teeth. Booker received a borderline blocking foul and was hit with his 6th personal with 1:26 left and the Suns up 4. Doncic danced down the lane to cut the lead to 2, and following two clutch Rubio free throws, did the same thing with 39.9 left.

The Mavs ended with the last possession and a chance to tie or take the lead. Their love for the three ball was ultimately their demise, as they missed two and time ran out. The Mavs would shoot 19.4% from deep (6-31).

I don’t like pointing to the referees as the reasoning for losses. It’s an easy cop out. If you want to win in this league, you have to be better than the refereeing. It was hard to overlook the whistles in this game, however. The Mavericks shot 37 free throws to the Suns’ 23.

You have to respect Luka. His basketball IQ is apparent, as he knew how and when to attack the rim and put the Suns in tough situations defensively. He could have forced a layup to tie the game in the final seconds, but chose to pass to Kristaps Porzingis and the three-point line instead. Regardless, he finished with 40 points. He shot a career high 19 free throws and made a career high 18. Porzingis added 30 points. They combined for 61% of the Mavs offense.

The bench turned the sins of the starters into an opportunity to shine. Cameron Payne, Jevon Carter, and Dario Saric were a big part of gaining and holding the lead. The depth of the Suns, which typically is viewed as a weakness, became a strength on Sunday evening.

Somehow, despite all of the foul trouble and minutes on the bench, Booker scored 30 points. Cameron Johnson had his first career double-double (19 and 11) and looked aggressive, Rubio had 20 points and 9 assists, Dario had 13 and 8 boards, and Cameron Payne added 10 including 2-5 from deep.

Kudos to the Suns, now 28-39, for have the resiliency to overcome all of the challenges they faced in this one. This was a quality win that may turn some heads. And now we turn our heads to Tuesday. And the Los Angeles Clippers.