Sacramento Kings center Richaun Holmes joins Michael Scotto on the latest edition of the HoopsHype podcast. The pair discussed Holmes’ rise from Bowling Green to being drafted, playing for the Philadelphia 76ers during the “Trust the Process” era, how Sam Hinkie was behind the scenes, his time with the Suns, why he signed with the Kings, and his free agency future. Listen to the podcast above or check out some snippets of the conversation in a transcribed version below.

1:05 Did you think you’d make the NBA after attending a smaller school like Bowling Green?

Holmes: I definitely always believed that I would play professionally somewhere when I went to Bowling Green whether it be overseas or in the NBA. I always had the belief that I would play professionally because my dream was always to play Division I. I felt like Division I was just one step away from playing professionally. I had a pretty good season at the end of my junior season at Bowling Green. That’s when we had a name coach there, coach Chris Jans. He came in and my work ethic changed over that summer. I was always in the gym trying to get better. I think once my last season at Bowling Green started, that’s when I realized I’ve got a chance as I was playing well in MAC (conference) play. I think what stands out to me the most is the PIT (tournament) for seniors only. I remember getting an invite to that and once I got invited to that I went as hard as I could there and got interviewed by a few NBA teams and it went from there.

3:44 Holmes on his time with the Sixers during the Trust the Process era

Holmes: It was funny seeing how hard it was to win in the NBA at that time. We had a lot of guys that were trying to prove themselves in the NBA and it was just extremely difficult to win. I just remember grasping the respect of having to work hard every day just to give yourself an opportunity. 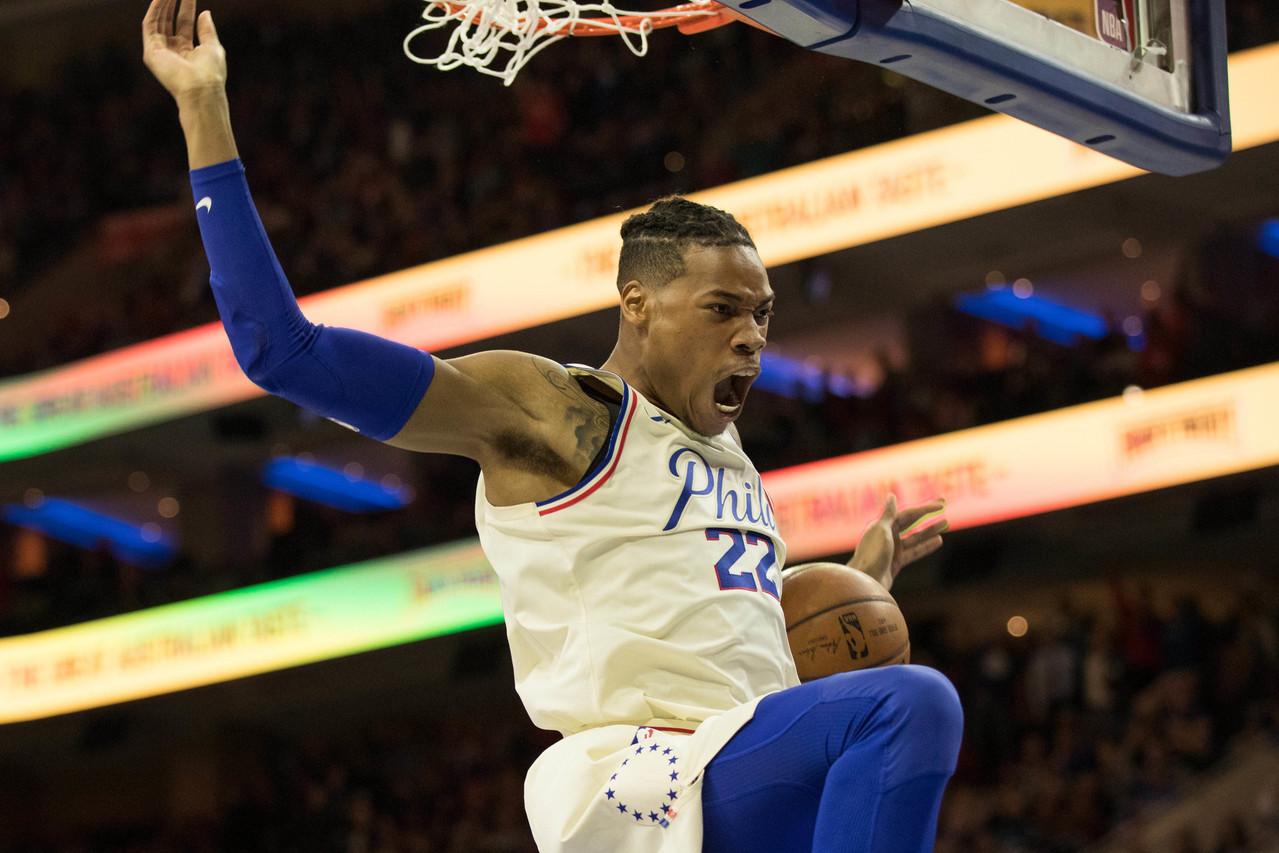 5:10 Holmes on the 10-72 76ers season and competing with teammates Robert Covington, Jerami Grant, and Christian Wood

6:35 Holmes on Covington’s growth to becoming a starter

Holmes: Rob always had a gift on the defensive end of the floor. He put the time in and was always in the gym in Philly working on his shot and ball handling to get better. He understood defense was what was going to keep him on the floor and he added a three-point shot to become a 3-and-D player that’s something that’s highly valuable in the league.

7:14 Holmes on the growth of Grant and Wood

Holmes: Complete gym rats. Jerami is an insane athlete and always put in time on his game working on ball handling and shooting. Wood was cut I don’t know how many times, and you couldn’t keep him out of the gym. The seasons they’re having are just a testament to all their hard work building up plus the opportunity meeting. They were prepared and ready to grab the opportunity by the horns and become the players they knew they could be.

8:02 What was it like in the locker room behind the scenes during that 10-72 season?

Holmes: It definitely was tough losing. A lot of guys coming into that locker room weren’t used to losing. There were a lot of young guys. To lose that much, we definitely had to keep each other’s spirits up. We were a really close team and very friendly. Guys like TJ McConnell really kept the team together just being his hilarious self. Isaiah Canaan was there. He was a personality. We just kept the mood as light as possible. 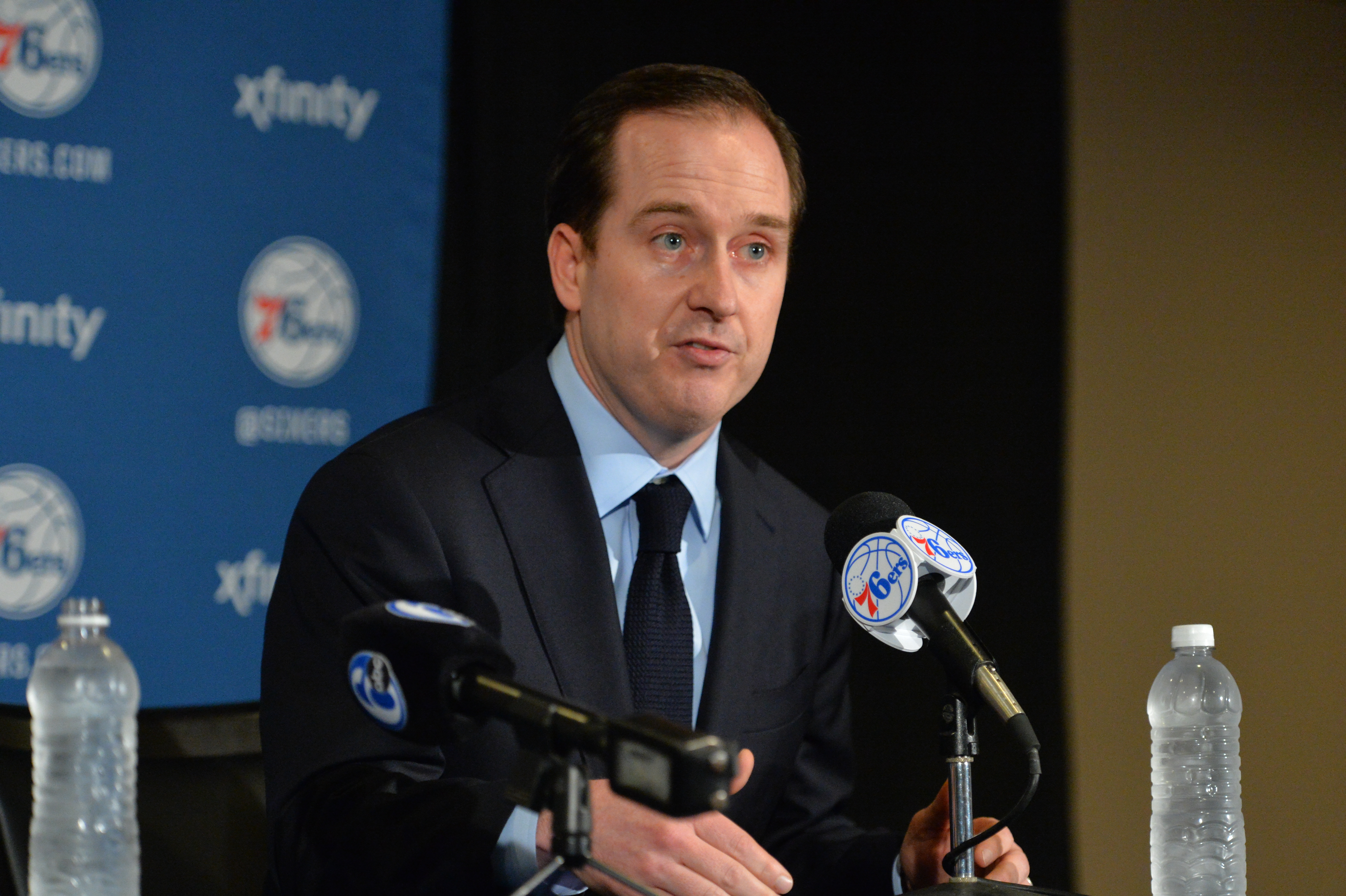 9:06 From your perspective as a player, what did you think of Hinkie as an executive and what he was trying to build there at the time?

Holmes: Sam, for me, he gave a lot of guys a chance to prove themselves in the NBA. I don’t know if I get drafted to any other team other than Philly at that time. I don’t know if any other situation could’ve worked out like Philly did. I feel like he gave a lot of young players a chance to prove themselves. A lot of guys need time and development. I think that’s one thing Sam was banking on was developing guys and getting guys prepared to play and getting the most of them. I think he had an eye for talent in that way.

10:46 What did you see from Markelle Fultz during the start of his career in Philly while he was battling injuries?

Holmes: Just determination in one word if I can sum it up. No matter what Markelle was going through, or what people were saying about him, he knew what he could be and he was always determined to get to what he was, get through his injuries, and become the NBA player and starting point guard he could be. He was another one of those guys who was always in the gym. Me and Markelle were close during his time in Philly. He would inspire me to be in the gym more with how much he wanted to be in the gym. I’m glad he got paid in Orlando, and I know he’s going to come back stronger from the injury.

11:56 What did you learn during your one season in Phoenix?

Holmes: I think the one year in Phoenix was mostly about me establishing myself as a solid NBA player. I feel like I showed flashes in Philadelphia, but never really did anything consistently. I think in Phoenix playing 70 games that year and having a consistent role as the backup big kind of solidified me as a solid big in the NBA. I went from Phoenix and got the contract in Sacramento. Now, it’s time to show I’ve gotten better in Sacramento. I think the time in Phoenix taught me how to be a professional mostly, be a pro, and how to take care of my body.

14:15 When you were in Philly and Phoenix what was it like behind the scenes?

Holmes: I know a lot of fans would come at us crazy, especially in Philly. Philly fans are ruthless.

Holmes: It would be everything that I can’t really say myself. Win some games. You get paid such and such. Get off your fat so and so. They were ruthless. We would probably get down like 10 in the first or second quarter and those boos would come raining down. 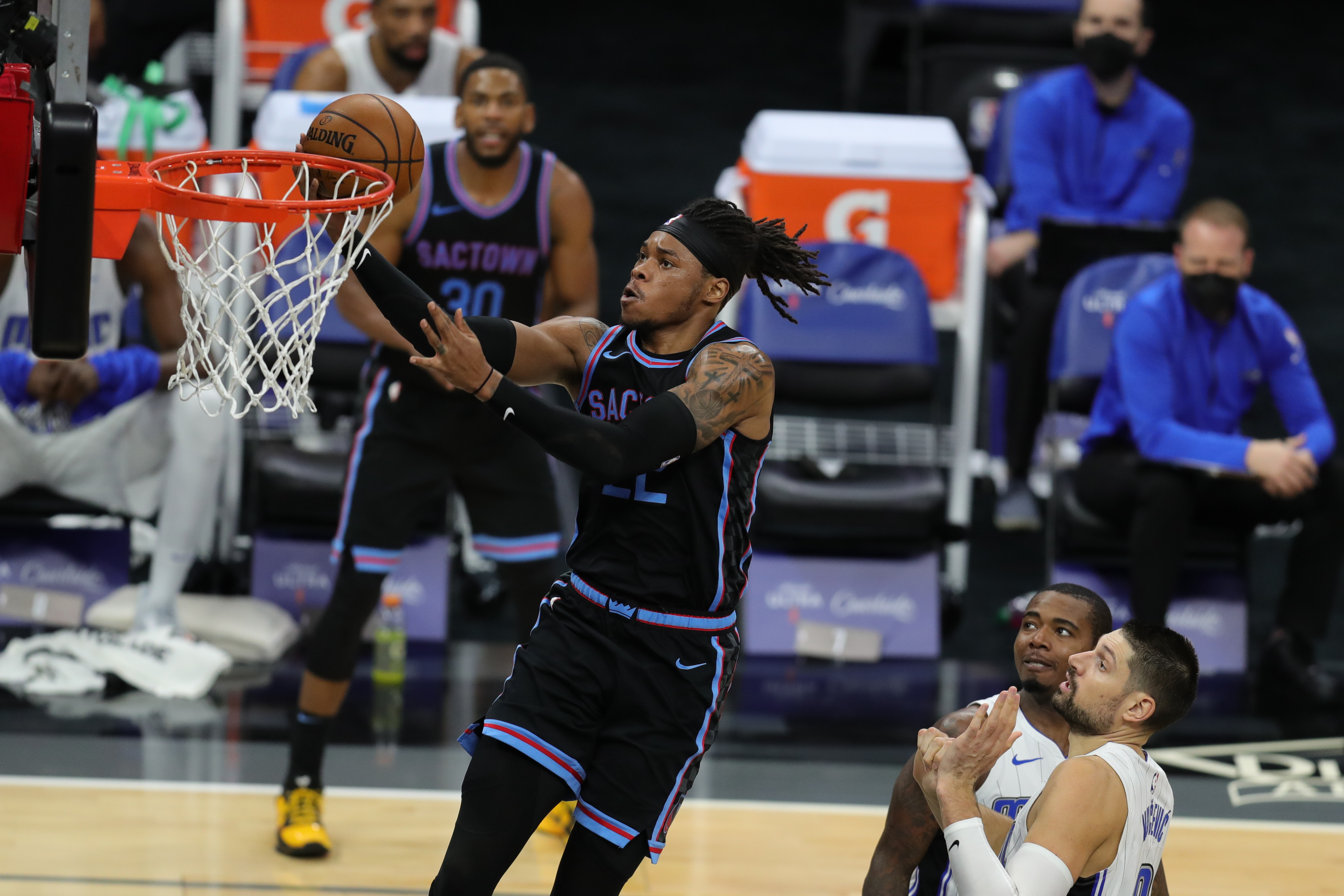 16:45 When you signed with Sacramento, what was your view of the Kings at the time and choose them instead of other options you had?

Holmes: They hadn’t been to the playoffs in a while, so I was really unsure. One thing about Sacramento is how hard they pursued me. From the opening of free agency, they made it clear they wanted me in Sacramento and I could help this team. I think that’s the one thing that won me over more than anything was how overwhelmingly they pursued me.

18:38 Which other teams were in the mix for you at the time?

19:10 What’s the experience in Sacramento been like for you since signing?

Holmes: It’s been extremely fun. I’ve gotten an opportunity to kind of prove myself, show myself here, become a starting center in the NBA, and solidify myself as that. I’ve enjoyed every moment of it. I’ve enjoyed playing in Sacramento to the fullest.

21:23 What do you think of this Kings team now and what you can do this season so far?

22:02 Where are you guys right now trying to accomplish that goal of making the playoffs?

Holmes: I think we’re too inconsistent at the moment. We’ve had highs and lows already in the season. I think we have to find a level of consistency to be that playoff team.

Holmes: It’s been great. One thing about Luke is he’s a player’s coach. His line of communication is always wide open. He’s always talking and communicating things that he needs to see and things I need to get better at and bring more of. For me, that’s what I need. That’s the type of coach I need. 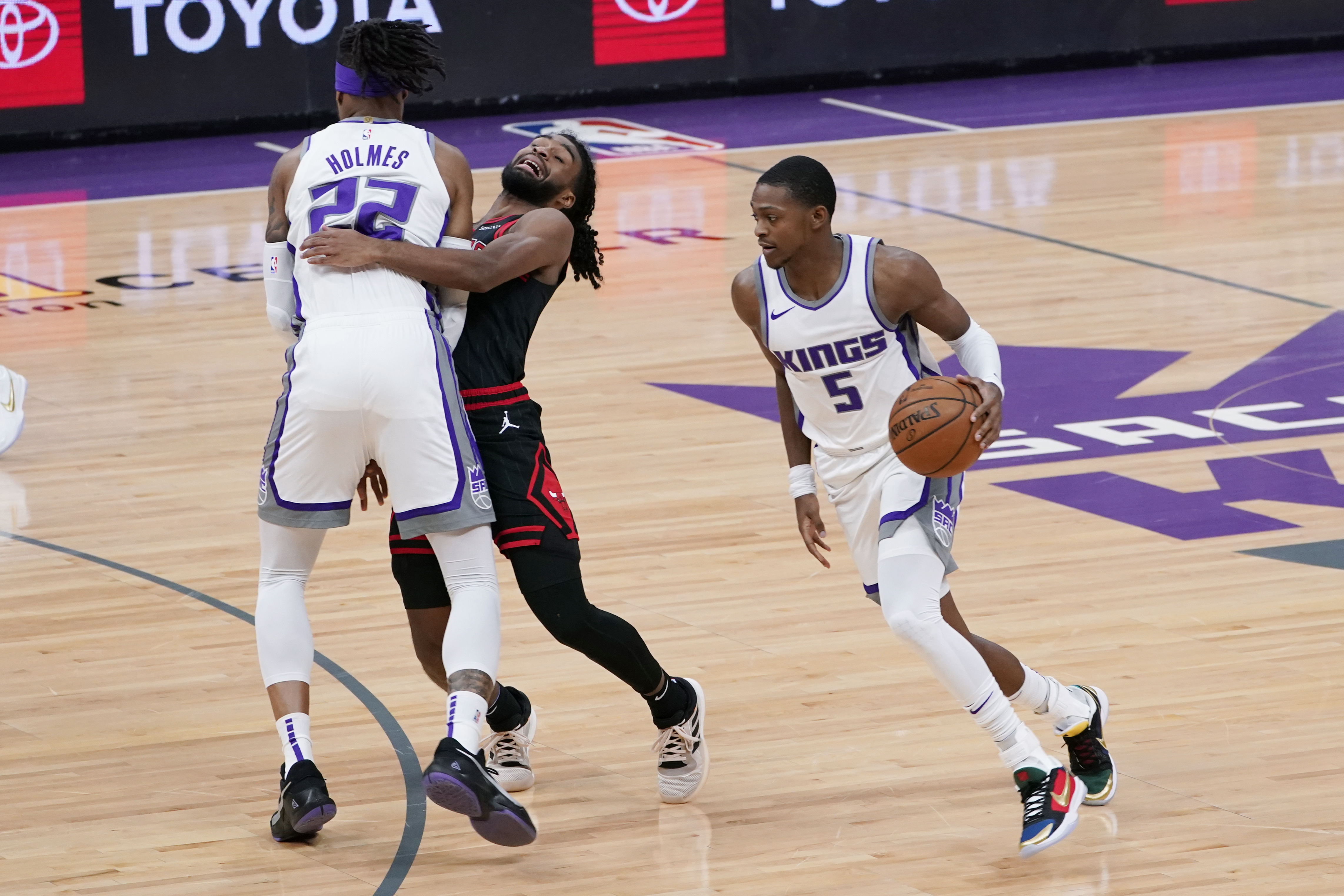 25:19 What are your impressions of Tyrese Haliburton during his rookie season?

Holmes: Just a high-level IQ. He knows where to be and where to put others on the floor. He kind of commands the floor when he’s out there. He’s a very smart player and very skilled. He has a great floater game that keeps defenders guessing in the pick and roll.

26:15 What are your thoughts on becoming an unrestricted free agent at the end of the year?

Holmes: It’s going to be interesting. I’m focused on the season at the moment. It’s hard for me to think beyond the next game, especially in season. The business side is the business side.

27:10 Holmes on what he did differently to prepare for the season

28:00 By the end of the season, what are your goals individually and collectively as a team?

Holmes: Collectively, to make the playoffs. That’s where we feel like we should be. That’s what we feel like the talent level we have, that’s a goal that’s accomplishable. Individually, I just want to show I’m a legit starting center. I’m one of the best centers in the league I feel like. And, as I get more consistent, I have a lot more to show. I just want to show that I’m one of the best two-way centers in this league for sure, continue to showcase that, and put the NBA on notice.

28:54 What things are on your free agent checklist?

Holmes: I want to be able to take care of my family. I’ve been putting in work in the NBA for six years now doing everything I can. I just want to be in the position to take care of my family and put them in the best position. That means a lot to me as well as being in a position to compete. I want to win championships at some point in my career. That’s always something that’s in my mindset as well.