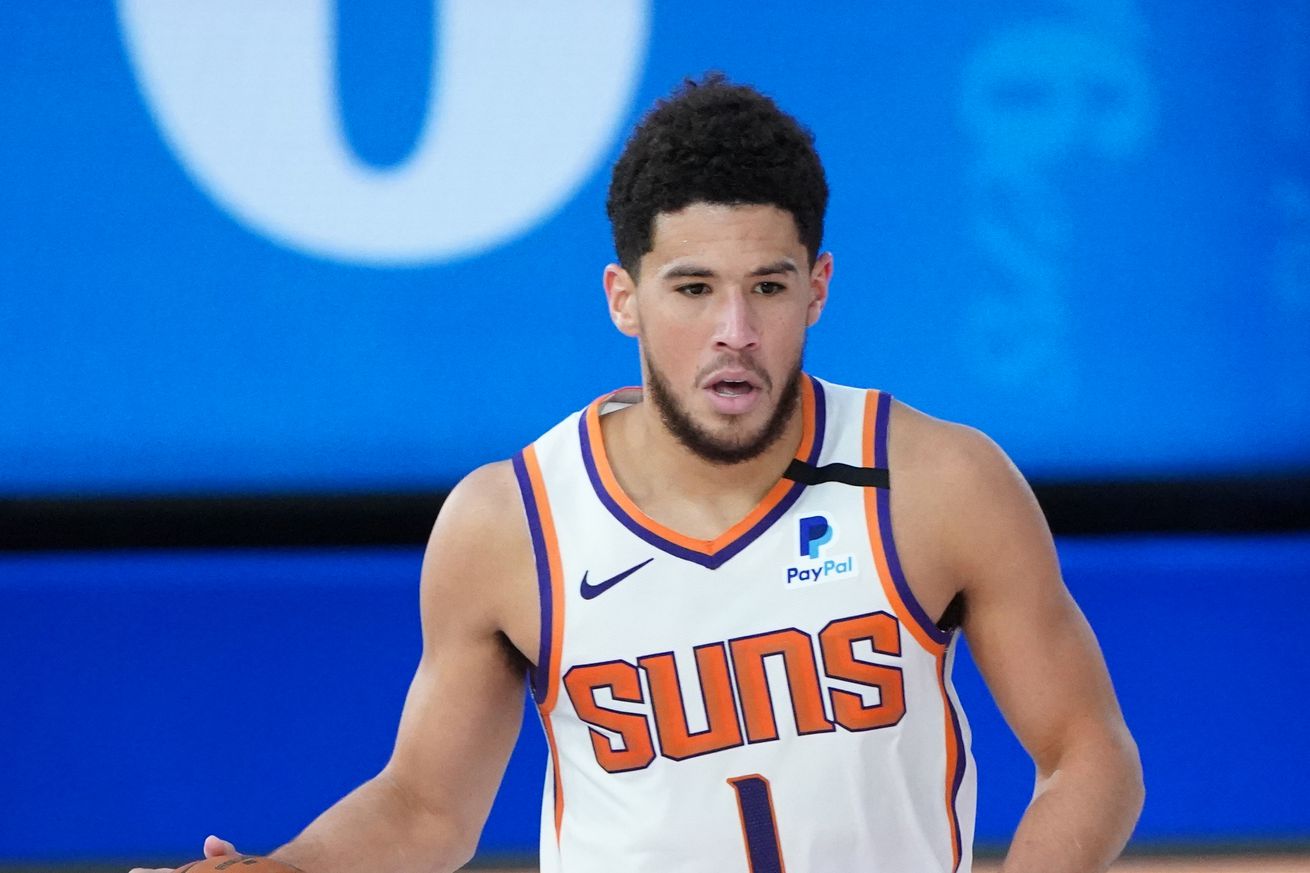 Will the Phoenix Suns trade Devin Booker next week? Here are the rumors going around

Today Devin Booker is the undisputed leader of a Phoenix Suns team that is destined for an NBA championship in the next three years. But if you believe Ryen Russillo of The Ringer, that ironclad plan may not come to fruition.

“The worst-kept secret in the league is Booker already wants out of there.”

For what it’s worth, John Gambadoro of Arizona Sports 98.7 FM immediately in Phoenix immediately slammed the claim.

This is 100% NOT TRUE. Book is happy in Phoenix, excited for the season, loves how they finished in the bubble, excited about free agency. Not one time has he ever told anyone he wanted out. Don’t listen to this garbage.

“This is 100% NOT TRUE. Book is happy in Phoenix, excited for the season, loves how they finished in the bubble, excited about free agency. Not one time has he ever told anyone he wanted out. Don’t listen to this garbage.”

In any event, the floodgates opened for NBA prognosticators, big and small, to float their Booker trade ideas. Here’s a sampling.

“The Suns would immediately shed significant salary in Booker and Oubre while taking back much cheaper contracts in Reddish (No. 10 in 2019), Hunter (No. 4 in 2019) and the No. 6 pick in the upcoming NBA draft. With that pick, Phoenix would have a chance to add a highly regarded prospect like Devin Vassell, Onyeka Okongwu, Deni Avdija or Killian Hayes.

Along with the incoming talent, the Suns would be able to keep the rights to Dario Saric (a restricted free agent) and still have $35 million in cap room to spend in free agency.

If this trade configuration isn’t suitable for the Suns, the Hawks’ cap space makes it simple to substitute pieces like Collins for Hunter or Huerter for Reddish, etc. Phoenix would need to evaluate if Collins and center Deandre Ayton would be the right fit together, especially with Collins eligible for an extension this offseason.”

“Parting ways with a franchise player like Devin Booker is tough but the Boston Celtics have enough talent and NBA Draft assets to put together an intriguing trade package. At some point, consolidating their potential offerings for a dynamic talent may be the answer.

In this deal, they would acquire another potential franchise player in Jaylen Brown. He is 24-years old and coming off a season where he averaged 20.3 points per game on 48.1% shooting and 38.2% from three-point range.

The Suns would have the No. 10 and No. 14 picks in the 2020 NBA Draft where they could add more promising talent. Obviously, giving up Booker would not require the Suns to part ways with anyone else. Deandre Ayton and Mikal Bridges will remain in place.

This is a move to shake up the franchise. They can finally add more pieces to their team while acquiring a replacement for Booker. This is an interesting deal for the Suns and one that might not be welcomed at first, but it would grow on fans over time.”

“Phoenix, saddling its own decade-long playoff drought, would want to maintain some competitiveness and build off the progress made in Monty Williams’ first season.

If the Suns could redirect some of Booker’s on-ball responsibilities, Hield could replace all of his shooting. Bjelica would add spacing and secondary playmaking working either alongside or behind Deandre Ayton.

Still, with Ayton—by far the most important player on a Booker-less Suns squad—only 22 years old, the Suns should look to land longer-term assets, too. This trade would give them a second lottery pick in this draft, plus an early second in a class that’s best trait is its depth. Finally, a lightly protected future first from Sacramento is always inviting knowing the many missteps in this franchise’s recent history.”

“It sounds a bit underwhelming for the Suns at first, but those feelings can be offset when you realize both Wiggins and Paschall have been selected to All-Rookie teams. Both are also still under 25, meaning neither has reached their peak.

Those young studs, along with the No. 2 pick, gives Phoenix three solid players for the price of one (supposedly unhappy) star.

Most importantly, the Suns get more time to convince their players a long-term future with the team can result in Championships. They would no longer be bound by the threat of Booker’s looming departure.

With a stockpile of picks and young stars, Phoenix could become a legitimate threat in the next few years — and might have a shot to finally end their long and brutal streak of missed playoffs appearances.”

“If the Suns were ever to trade Booker, they’d almost certainly need another young star to take his place.

Enter Herro, who at just 20 years old is coming off a playoff run with the Heat in which he averaged 16.0 points, 5.1 rebounds and 3.7 assists as a rookie, including dropping 37 off the bench against the Boston Celtics in the Eastern Conference Finals.

Herro would be the perfect player to take Booker’s place in Phoenix, a fellow Kentucky shooting guard who’s coming off an even more impressive rookie season.

A starting lineup of Rubio, Herro, Robinson, Kelly Oubre Jr. and Deandre Ayton with Mikal Bridges, Nunn and Cam Johnson off the bench would be one of the best collections of young talent in the NBA.”

“After what Phoenix Suns star Devin Booker did during the regular-season restart in Orlando, he is borderline untouchable as an asset. He is also close friends with Timberwolves teammates Karl-Anthony Towns and D’Angelo Russell, the latter of whom went on record last year with the trio’s desire to play together. Signed through 2024, Booker would have to force his way out of Phoenix, which is entirely plausible at some point.

What if that point were in the weeks leading up to the draft? The Wolves own the No. 1 overall pick, quite possibly the best trade piece for Booker they will have while Towns is under contract, even in a down draft. They have their first-round picks from the past two years, Jarrett Culver and Josh Okogie, and future first-rounders in 2023 and 2025 to package with the rights to Anthony Edwards, James Wiseman or LaMelo Ball. James Johnson’s expiring $15.8 million contract and salary filler could make the money work to get Booker.”

For Phoenix, this is too good of a talent haul to pass up.

LaVine (25.5 points, 4.8 rebounds, 4.2 assists) finished just two spots behind Booker on the NBA’s scoring leaderboard this past season, and Markkanen could become the franchise’s answer at power forward.

Getting the No. 4 overall pick in the draft also gives the Suns tons of possibilities, with players like Deni Avdija, Killian Hayes and Isaac Okoro all likely to be available.

A starting lineup of Ricky Rubio, LaVine, Mikal Bridges, Markkanen and Deandre Ayton could make some playoff noise in the West and would be set up to win for years to come.

None of these are going to happen. Thank you for reading.