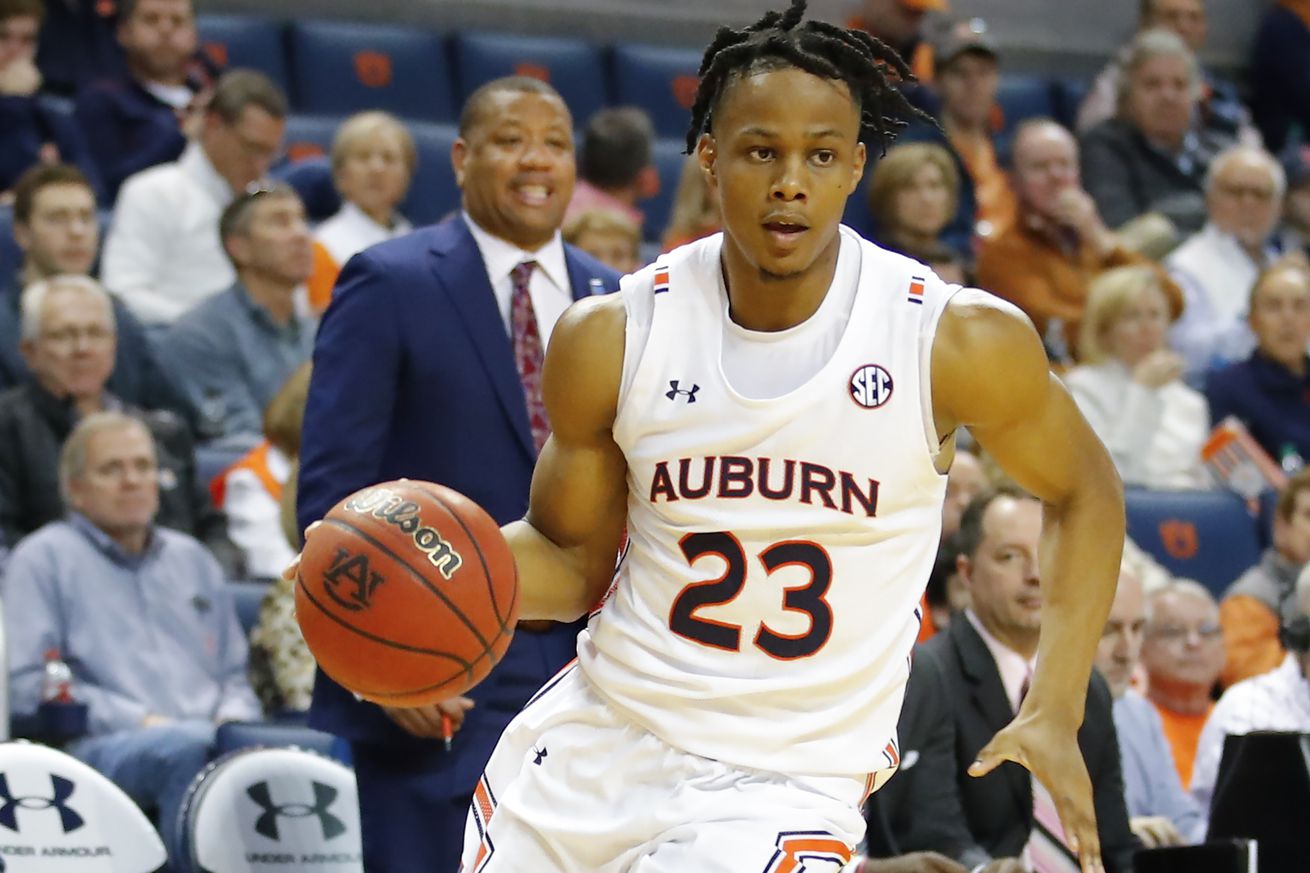 Isaac Okoro is one of the best defenders in this entire class, and his versatility would add yet another modern wing to Phoenix’s collection.

The draft coverage continues. This is part-five of our draft series where we’ll be covering both fits for the Suns with the 10th pick and potential trade-back candidates. So far we’ve covered Killian Hayes, Devin Vassell, Tyrese Haliburton, and Ty-Shon Alexander. This time we’ll break down the “mega-wing” of the draft class, Isaac Okoro out of Auburn. Okoro is one of the most powerful athletes in this entire class and would offer the Suns additional versatility on their wing depth chart.

Isaac Okoro is a 6’6” wing who is tough as nails, guards four positions, constantly plays hard, has killer work ethic and has been known to be extremely coachable. Those traits alone sound like a coach’s dream player. All the intel on him has been overwhelmingly positive, and that’s something that is taken into consideration by decision-makers in NBA front offices.

Isaac Okoro and Devin Vassell are the only two legitimate “modern” versatile wings at the top of this draft, excluding Deni Avdija who projects more as a point forward prototype. The odds Okoro is available with the 10th pick are slim, as the wing depth is very thin and there are teams at the top of the draft that have a need for a player of his caliber/archetype. If he’s still on the board, Phoenix should strongly consider selecting him depending on who else is available.

Weaknesses: N/A (could clean up team-defense rotations a bit, but not a weakness)

This is his calling card. The defensive side of the ball will be his ticket to immediate minutes and should eventually become the thing he’s known for league-wide. He will be able to guard positions 1-4 and even the occasional small-ball five due to his strength. He takes on the assignment of the opponent’s best player on a nightly basis, which is something that could unlock the Suns highest ceiling defensively which we can day-dream about below.

You assign Isaac Okoro to the opponent’s best offensive player to hound them mercilessly. You have Deandre Ayton as a nimble behemoth of a defensive anchor down low. Mikal Bridges gets to play free safety in an off-ball in a role where he wreaks havoc in the passing lanes and in weak-side help defense. You have Kelly Oubre Jr. and his limbs everywhere on the other wing, waiting to make an impactful play. All that length, size and strength surrounding Devin Booker would insulate him and give you a unique and exciting defensive group that we haven’t seen in Phoenix quite possibly ever. You could also sub in Cam Johnson for Kelly in those lineups to help with the floor spacing, but you get the general idea. The flexibility in adding someone like Okoro to the defense would be exciting with the foundation they already have in place. “The Toronto/Boston model”.

If you want a quick visual representation of how disruptive and impactful he can be on the defensive end, watch this:

6-6, 225 lbs + 19-year-old Isaac Okoro was one of the most impactful defenders in the college game in his lone season at @AuburnMBB. The potential 2020 #nbadraft top-5 pick has All-NBA potential thanks to his excellent lateral quickness, high intensity level + sound technique pic.twitter.com/5GQjSZTPhs

This is one of the least talked about phases of his game, and it’s worth creating a brief section for which is rare for most wings. He is by no means a playmaking savant or anything extraordinary, but he makes the right play more often than not and has underrated passing acumen. It’s important to surround him with shooters and creators (which Phoenix has both of) so he can fully display his ability to both pass and cut effectively on the move within the flow of the offense.

He sees the floor well on both sides of the ball in large part due to his pristine basketball IQ. He rarely makes mistakes and when he moves the ball it’s frequently a quick, purposeful decision which is an important factor to consider in Phoenix’s “0.5” offense, and it’s why I think he could still thrive in this system despite the limitations to his jumper.

The reason for highlighting his passing is to illustrate the fact that he won’t hinder the crisp ball-movement the Suns have nearly perfected (especially in the bubble) when he enters the game.

Isaac Okoro is legitimately one of the best passers in this class, though some of his talent isn’t functional. He can make skip passes, kick-outs, drop-off feeds, hit the roller and distribute from the post pic.twitter.com/VJqSwcSyFl

Offensively there are valid concerns over his jumper, and how he will generate scoring opportunities in general. We touched on the passing above, and along with that I’ll throw in the fact that he is an excellent off-ball cutter. The timing and ability to read defensive coverages is typically instinctual, and it’s something that makes Mikal Bridges’ life easier offensively despite his somewhat limited creation ability. Compounding as many avenues as possible to be effective offensively when you aren’t a creator or legitimate shooter is vital in order to survive in the NBA today.

He is an elite finisher due to his ability to seek out and absorb contact at or near the rim through his functional strength and body control. He shot just over 68% at the rim as a freshman on a fairly significant sample size, which is elite. His positive slashing ability along with a dynamic transition game and elite finishing ability will offer some immediate value offensively.

The jumper is very much a work in progress. He doesn’t have very positive shooting indicators either with his poor free throw numbers (67%) and the abysmal “long 2s” shooting percentage (16%). The form on his jumper needs some work, it looks a bit stiff, rigid and somewhat forced at times. The positive is the base in his jump shot mostly looks fine so it’s just the stuff up top he’ll need to clean up, making it a do-able job for developmental staffs. Hours upon hours of work will need to be put in to smooth it out, and I have no doubt he will be willing to put the time in from everything I’ve seen/read about his character and work ethic.

The finishing numbers are encouraging and there have been some brief flashes where he’s shown a step-back three or some creation ability, but those moments aren’t frequent enough to get excited about. He does a nice job of playing to his strengths though for the most part and that plays into his high feel for the game.

His plus athleticism also allows him to do cool stuff like this ferocious poster against Vanderbilt.

Where were you when Isaac Okoro single-handedly murdered Vanderbilt? pic.twitter.com/MI6rX5XCUR

Deandre Ayton displaying the ability to shoot the three in Orlando has slightly changed my tune on the Okoro fit in Phoenix. Adding a non-shooter (at the moment) in Okoro to a lineup with another non-threat from distance (Ayton) had the potential to become a spacing nightmare. This development in Ayton’s game, along with my belief that Okoro’s shooting isn’t entirely hopeless makes me believe it could wind up being a tangible fit long-term even if neither of them hit high-end shooting outcomes.

He could be a long-term solution as a small-ball four next to Deandre Ayton and offer some insurance for Kelly Oubre’s impending free agency status. Phoenix does need to add athleticism and could use a bigger wing so Okoro makes sense on those two levels. It all comes down to whether or not this front office and development staff believes they can rework the mechanics and fix his jumper. I do not think he’s a lost cause here, and there is potential for him to eventually become a neutral shooter on a decent volume from three. Then when you factor in everything else he brings to the table and it could be a very worthwhile investment.

Watch this video and tell me this isn’t the type of guy you’d like to bet on. Hard workers that are dedicated to their craft always find a way to be productive and correct their flaws (at least to an extent) eventually through commitment to their craft. Okoro strikes me as the type that won’t allow himself to be a liability from distance for his entire career. Just look what someone like Jevon Carter has done with his three pointer from his freshman year at West Virginia until this point. As the old adage goes, “hard work beats talent when talent fails to work hard”. Okoro fortunately has both going for him.

“Nobody works harder than Isaac Okoro.”

The @AuburnMBB freshman is making a name for himself. pic.twitter.com/SRp0hBb5Cx