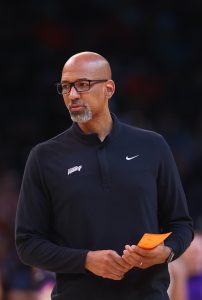 Shams Charania of The Athletic (Twitter link) confirmed the news a few minutes later, noting that Williams led the Suns to an NBA- and franchise-best 64-18 record in 2021/22. Phoenix led the NBA in net rating at +7.5 and held the No. 5 offense and No. 3 defense during the regular season.

Williams, 50, was runner-up for Coach of the Year last season after he guided Phoenix to a 51-21 record and a berth in the NBA Finals. The Suns ultimately fell to the Bucks in six games.

Phoenix’s turnaround has been one of the most surprising stories in the league over the past couple seasons. The Suns hadn’t made the playoffs since 2009/10 prior to their run to the Finals last season, going a combined 272-450 (.377) from 2010-2019.

In three seasons as Phoenix’s head coach, Williams sports an overall record of 149-79 (.656), including 20-12 in the postseason (.625). The Suns are currently tied with the Mavericks at two games apiece in their second-round matchup, with Game 5 set for Tuesday in Phoenix.

The other finalists for Coach of the Year were Grizzlies coach Taylor Jenkins and Heat coach Erik Spoelstra.