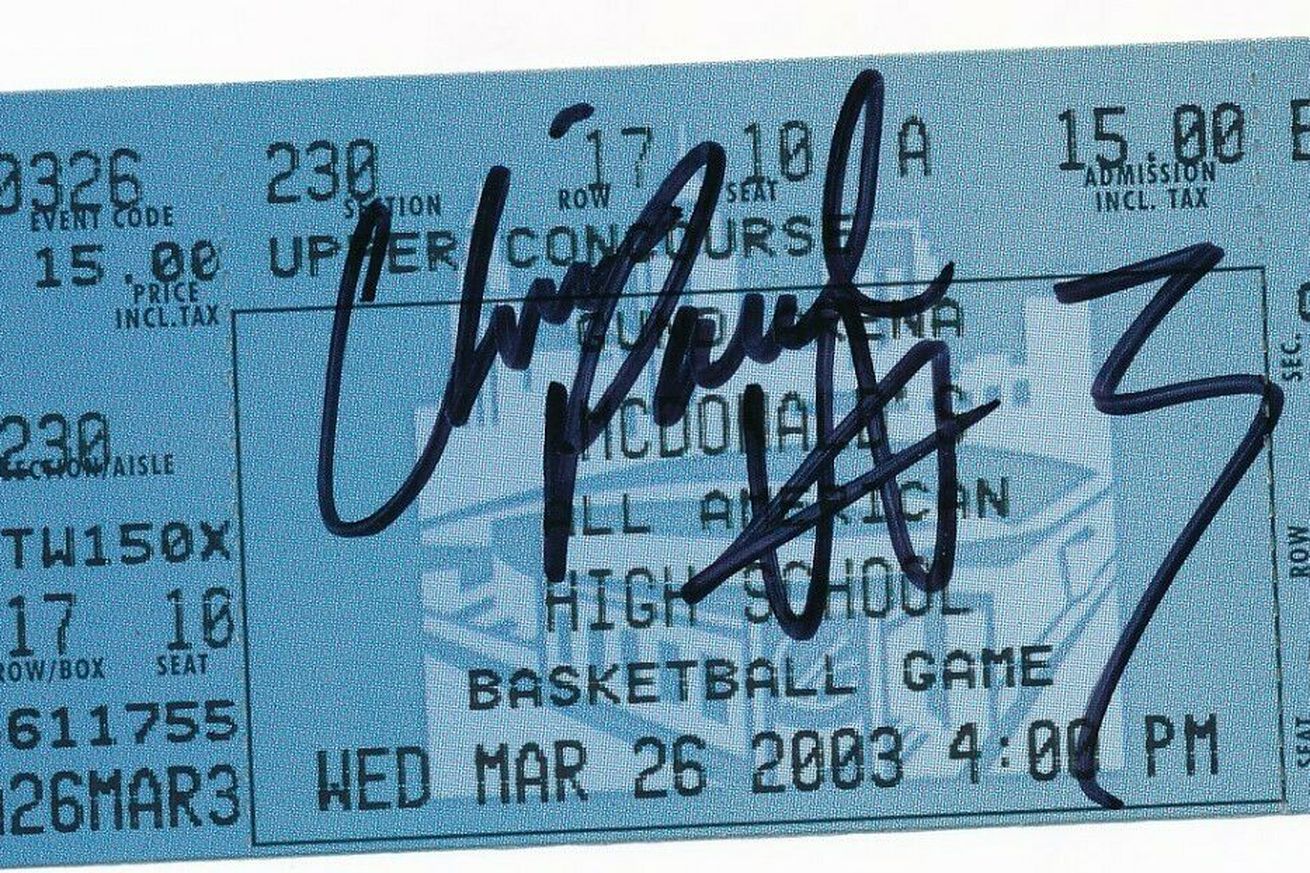 The 2003 McDonald’s High School All-American game featured a couple of guys that ended up making a career out of basketball. Notably, Chris Paul, and LeBron James who was named game MVP. In total five participants were selected in the ‘03 draft. James was joined by Travis Outlaw, Ndudi Ebi, Kendrick Perkins, and James Lang.

It’s important to note this excerpt from the seller’s description:

I guarantee all my autographs to be 100% authentic and to pass any major certification company (Beckett, PSA, JSA, Upper Deck, Steiner, or any other major company). I do not offer COA’s because if you really want it certified pay the money to have it done from one of the major companies. A COA from a memorabilia shop is nothing but a piece of paper. If any of my autographs get returned to you as not authentic from a MAJOR company (one stated above) I will give you a 100% money back guarantee for lifetime, that’s because I know I sell only the REAL DEAL.

If you’re unbothered, add this piece to your collection from the maybe future Sun for $712 after shipping.

Before embarking on a career that would lead VanVleet to the enviable position of garnering interest from a rising team like the Phoenix Suns, he led a Wichita State Shockers team that advanced to the Final Four for just the second time in program history.

The ninth-seeded Shockers outlasted the #2 Ohio State Buckeyes, 70-66 before they were bested by eventual champion Louisville 72-68 in the national semifinals.

VanVleet signed this copy of the Wichita Eagle capturing the magical moment. The seller has no COA to offer but is happy to include a picture of him or herself if that makes you more comfortable. It definitely looks cool. You’ll have to decide if it’s $540 worth of cool.

Rumors, some strong some not, have swirled around Gallinari potentially landing in Phoenix for awhile now. Can you bet on it? No. But you can bet on it.

I wish I had more to share about this sneaker, but here is the seller’s entire description:

**Please note that this is a single shoe

Well, it’s interesting to look at, if nothing else. For what it’s worth, the seller has a random assortment of other items posted, including an additional Gallinari shoe and a game used, signed Shawn Marion sneaker. The item pictured above will run you a five-hundred dollar bill.

Well, you’re unlikely to find another one of these. From the seller:

UP FOR AUCTION IS A HAND SIGNED JRUE HOLIDAY NEW ORLEANS PELICANS 2008 STATE CHAMPIONSHIP HIGH SCHOOL TICKET STUB. JURE HOLIDAY AND CAMPBELL HALL WENT ON TO WIN STATE CHAMPIONSHIP IN 2008. I WORKED AT THIS GAME AS CAMPBELL HALL’S TEAM HOST. THIS IS VERY LIMITED TICKET STUB AS ONLY STAFF MEMBERS RECEIVED THIS TYPE OF TICKET. AFTER CAMPBELL HALL WON GAME I WAS ABLE TO GET JRUE TO SIGN MY TICKET STUB. WHAT A PLAYER AND A GREAT GUY! COMES WITH COA WITH MATCHING HOLOGRAMS ON COA CARD AND TICKET. THIS TICKET IS GUARANTEED TO PASS ANY OTHER THIRD PARTY CERTIFICATION COMPANY OR 100% MONEY BACK, NO QUESTIONS ASKED AND AGAIN ALREADY COMES WITH COA.

Holiday was named Gatorade Player of the Year that season, and racked up a boatload of other accolades. He needed just a year at UCLA before he was selected by the Sixers #17 overall in the 2009 NBA Draft. Seller has this listed for $63.50 after shipping.

Don’t ask me when or where I heard the Kevin Love to Phoenix rumors. I mean, we’ve heard them forever, but I’m not sure how recently that talk has reentered my atmosphere. A week? A month? A year? I don’t remember. What’s time in 2020 anyway?

This item was sent to all Western Conference coaches as a promotion to get them to vote for Kevin Love for the All Star game. We are unsure of how many were produced. There are 14 Western division coaches outside of the Timberwolves. We assume some extras were made for team members and staff. Possibly 100 were produced. Extremely rare item that would be perfect for the ultimate Kevin Love collector.

A commercial was created for the campaign, and it is spectacular.

And it worked. In 2011, Love was named an All-Star for the first time. He’d finish the 2010-11 campaign averaging north of fifteen rebounds a game, to date his best season on the glass.

Memorabilia doesn’t get much more unique. If you have $507 laying around, this can be yours.