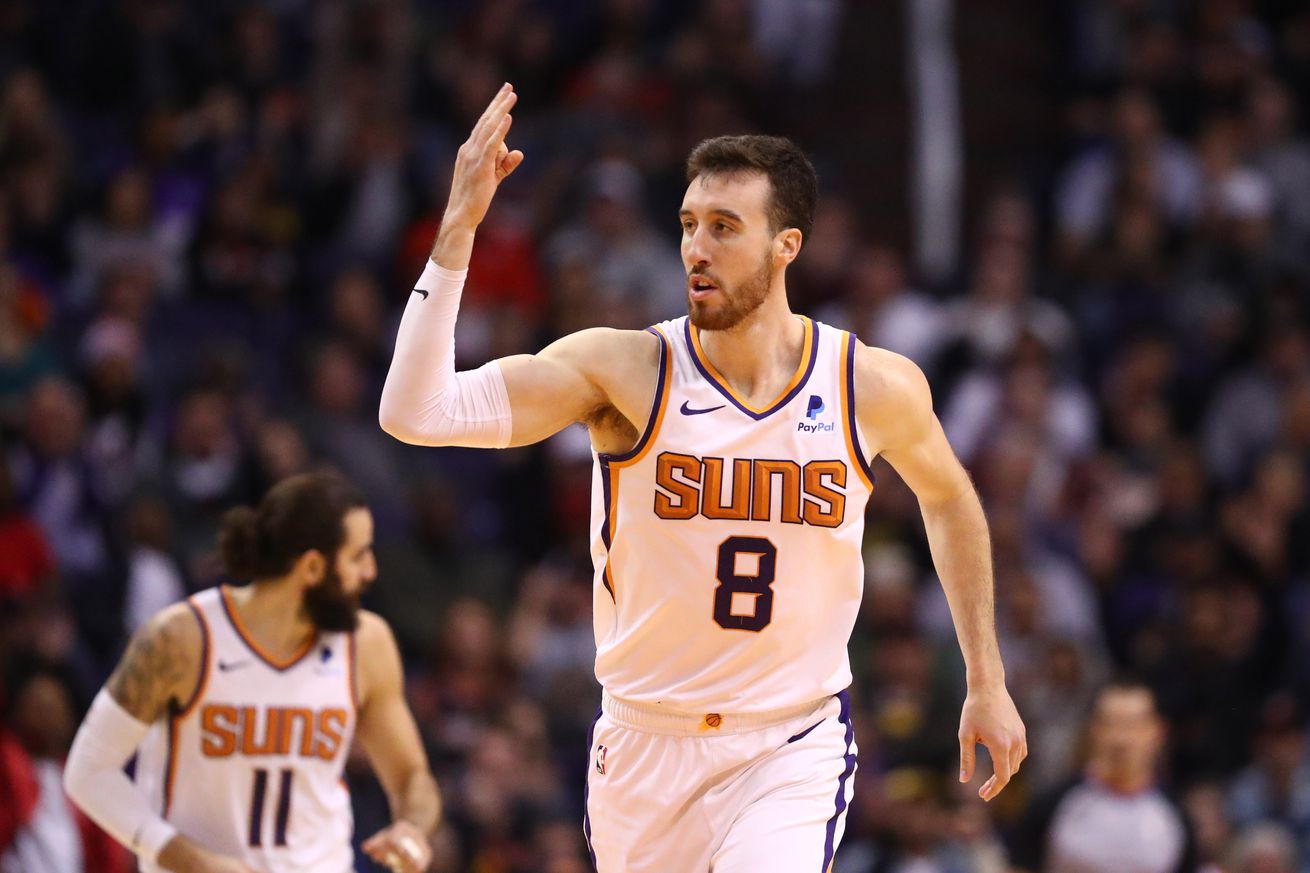 The starters and first two off the bench have been chosen. Who makes the next cut?

Devin Booker has been joined by Deandre Ayton, Ricky Rubio, Mikal Bridges, Kelly Oubre Jr., Cameron Johnson and Dario Saric as you have voted in the top seven players for your Phoenix Suns.

Man, that is such an upgrade of a roster over the last few years, isn’t it? I’m excited for the future of this team! Most of these guys are young and set to be in Phoenix for several more seasons. Let the good times roll!

The last selection was Dario Saric, who after just a so-so regular season had a really good outing in Orlando, displaying his playmaking and shooting in helping the Bubble Suns go 8-0. He’s only 26 and is a restricted free agent this summer. If he would indeed agree to a reasonable contract to come off the bench for Phoenix, it would do wonders for the rotation going into next season.

Now it’s time for you to vote for who you feel is the 8th-best player on the Suns roster!

The case for Baynes: The “Big Australian” is easy to love with his physical play, intensity and ability to step up. His play in the absence of Deandre Ayton can’t be talked about enough. In the first nine games of Ayton’s suspension, Baynes shot 58.7% from the field, made 21 threes on 48.8% accuracy and posted 17.4 points, 6.2 rebounds, 3.3 assists and 1 block per game. It feels weird to call it that as he’s 33 but he had a bit of a breakout season, putting up career high numbers across the board.

The case against Baynes: For a young team, he is an old man. Will this type of play continue? Also, can he stay healthy? He missed roughly half of the Suns’ games this season. He will be an unrestricted free agent so he can sign anywhere he wants. Will he go somewhere else where he can be a starter or have a faster chance at a ring?

The case for Carter: Jevon is fiery and relentless, his intensity is contagious and he is the type of player that will help immensely in a playoff series. By the time you’ve read this paragraph, he’s already stolen the ball and made a three. The former Mountaineer enjoys stepping up in the big moments and was a huge reason why the Suns did so well in the bubble.

The case against Carter: He isn’t a natural point guard and arguably isn’t big enough to play the two. Not a playmaker, he doesn’t dish out a ton of assists. However, he maintains good control of the ball and is a good decision maker that makes the right pass at the right time.

The case for Kaminsky: “Frank the Tank” is a tall shooter that can provide some offense off the bench and is a decent rebounder. He found a role in Phoenix, ranking just outside the top 5 in usage percentage and at times through the season looked better than Saric while on the court.

The case against Kaminsky: Before this season, he was almost out of the league. While he is able to shoot the rock, you expect a bit better than 33 percent accuracy. He isn’t a rim protector and hasn’t shown much in terms of being able to help the team win.