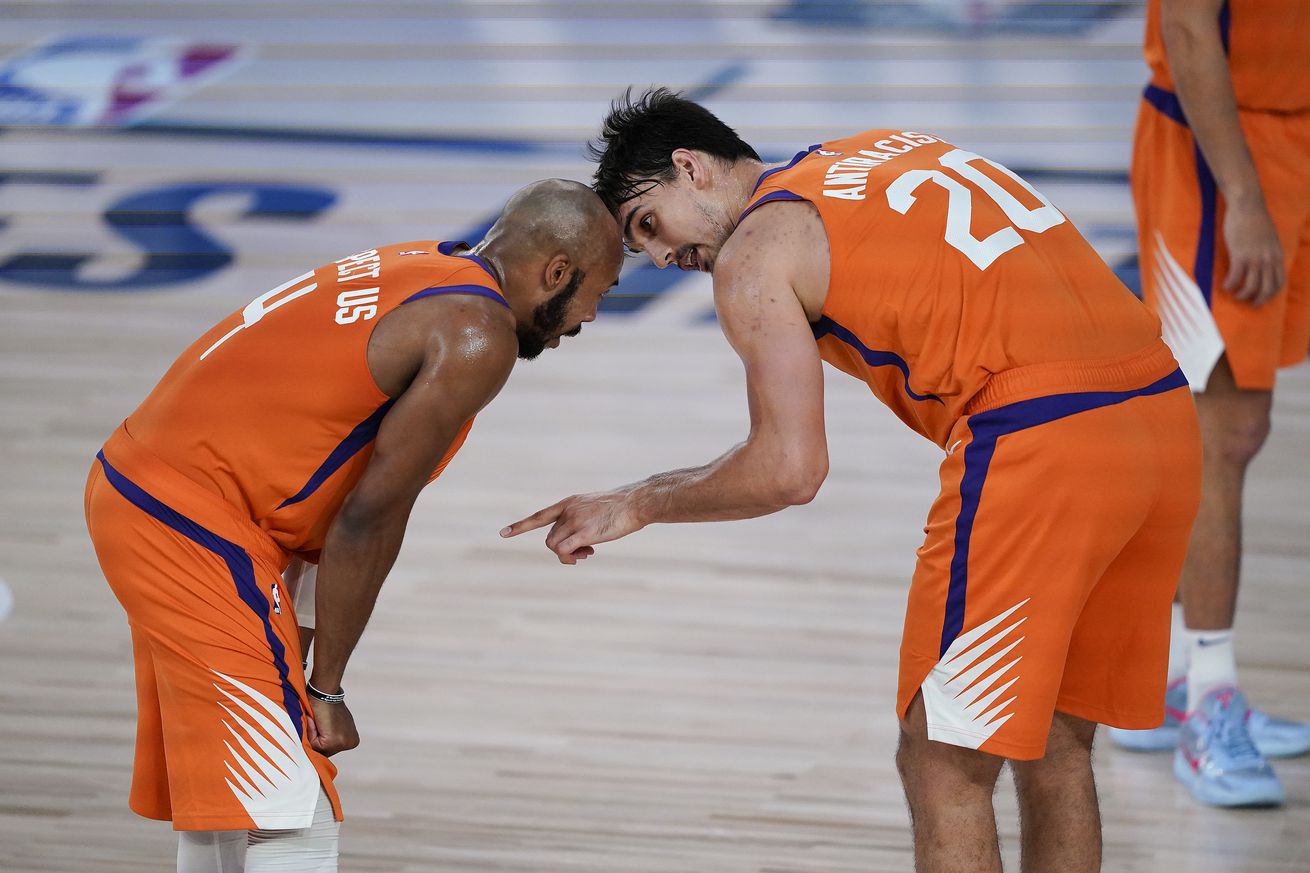 Dario Saric found his ideal niche with the Suns to close the season out, and it would be wise to find a way to bring him back to lead the second unit next season.

Dario Saric had a rollercoaster season in his first year in Phoenix following the draft day trade from Minnesota. He started off slow, then displayed occasional flashes of being the player they thought they were acquiring on draft night, only to randomly lose his spot in the rotation or get benched for extended periods of time.

The stretch Saric had in January and February was fairly brutal and his minutes per game dipped below the 20 mpg mark, but leading into the bubble he was actually quietly in the midst of a tear.

In his last 5 games before entering the bubble, he averaged 17.2 PPG, 7.2 RPG, 1.6 APG on 59/58/76 shooting splits. He clearly carried all of that momentum over to Orlando and embraced the super sixth man role he was given.

Sure, it’s only an 8-game sample size, but the reason for highlighting this is that I believe they finally found a role that optimizes him best and we got a taste of what a Saric-led bench could look like. He primarily played backup center but also played the 4 alongside Ayton or Kaminsky in stretches. Offering multi-position versatility would be a major plus and boost his stock significantly for those that paid attention to the Suns during this stretch.

You add in those aforementioned 5 games leading into the bubble plus this 8 game stretch, and I’d say it’s fair to be optimistic about a legitimately impressive 13-game stretch as the season was winding down.

There are plenty of power forwards in the open market that could make sense for Phoenix, as our very own Sam Cooper already dove into here. The potential issue with guys like Danilo Gallinari, Christian Wood, Jerami Grant and Davis Bertans is the amount of money they figure to demand along with most of them expecting to start and get paid. It’s tough seeing Phoenix relegate both Kelly Oubre and Cam Johnson to the bench while pursuing one of those top tier forwards, so if they do decide to make a splash like that it seems likely they’d have to move Kelly Oubre Jr., and that’s just purely my own speculation based off the situation at hand when looking at playing time and the contract situation(s).

It’s also worth noting with how few teams actually have significant cap space, once those top 4-5 power forwards are off the table, the market will dry up and the demand for someone like Saric won’t be as dramatic and there won’t be a ton of money for teams to throw at him anyways. It’s tough to see him getting a massive deal in this economy.

Is Saric as talented as the guys in the aforementioned group? No. He’s a tier below them all, but he is still a more than serviceable rotation player that is relatively young and has shown he has the ability to play center effectively, thus enhancing his versatility and value to a team that excelled with him running the 2nd unit in the bubble.

One of the most enticing “pros” to brining Saric back is without a doubt the continuity aspect of it. He understands the system, has developed chemistry with some of the younger guys and he and Ricky Rubio seemed to be the clear veteran leaders on the floor in Orlando.

For a team that has lacked any form of continuity from year-to-year for quite some time now, it would be nice to see a majority of the roster returning while addressing their needs simultaneously. It seems like he (Saric) and Monty Williams established a mutual understanding after the rocky start to Saric’s first year in Phoenix, so if they decide to bring him back to lead the 2nd unit and he’s fully invested to the role once again, it would be a massive boost for what was a very weak and inconsistent Suns bench unit during the regular season.

The unlikely (and hilarious) bond he developed with rookie Cam Johnson made for some excellent bubble content as well.

How to retain him

Dario is a restricted free agent which in a way is nice, as other teams will set his market and if the Suns can’t agree on something with him outright, they can sit back and see what offer he gets and match if they find it an appropriate figure. In most cases teams don’t love signing offer sheets if they know there’s a good chance it gets matched, so the Suns will mostly be in control of the situation. If the price is too high or they set their sights elsewhere in the free agency market then they can simply opt to not match.

Bringing him back on a reasonable “1+1” deal where they front-load the first year and slap a team option on the 2nd year would be more than ideal and makes sense for both parties. Something along the lines of a ~$13.0 million guaranteed in year one, with a ~$11.0 million mutual option for the 2nd year seems reasonable making it a 2 year, ~$24 million deal on the surface. This way, if Phoenix wants to retain cap flexibility for the 2021 free agency class they can decline the option. If his performance in this role is sustainable over the course of the season and the value is still there, then picking up the option could also make sense. It’s a win-win.

This would be the “over the cap” situation where the Suns could still use their MLE (mid-level exception) at $9,258,000 and the BAE (bi-annual exception) at $3,623,000 to sign two quality players while retaining the likes of Saric, Baynes, Carter and Payne without having to worry about going over the cap when extending Dario and Aron. There are certainly other ways they can go about it, but I believe the best way to approach it in terms of gaining the most depth possible while retaining continuity and flexibility would be the 1+1 route.