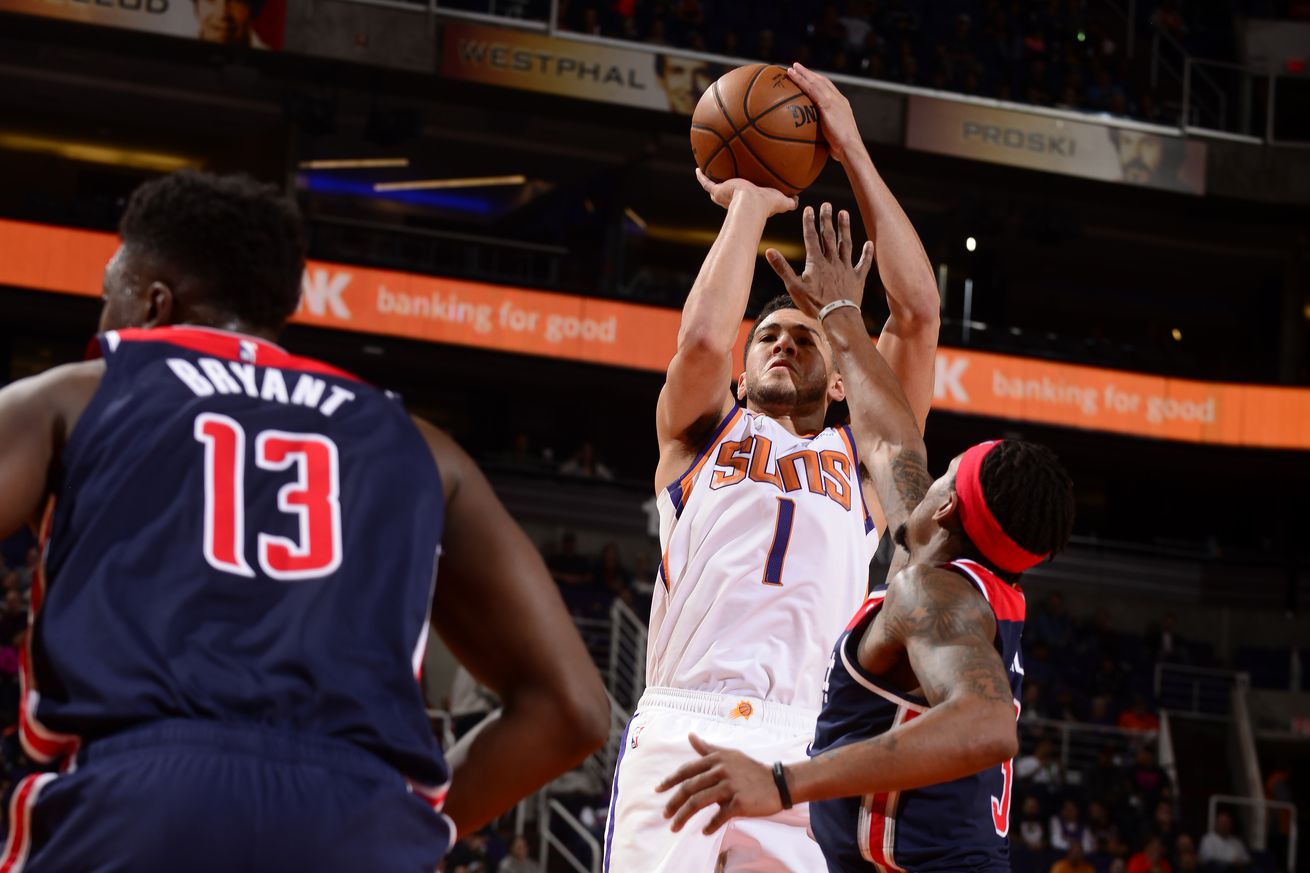 An on going bubble series: The Suns JAM Session guys have reached out to SB Nation representatives of the competition. Here is what they had to say about their team, their chances, and the Phoenix Suns.

Remember the first day of school? How about the night before? The pit of excitement that borrowed in your stomach, the sleepless hours, the endless fabricated scenarios of the next day’s interactions?

Yeah, that is how I’m feeling right now. We have one day until Suns basketball is back, albeit in a bubble far, far away.

In an effort to pass my time, Matthew Lissy (my co-host of the Suns JAM Session podcast) and I decided to do some detective work. We reached out to the seven different SB Nation sites that represented teams the Suns were scheduled to play. The goal? To have them talk about their team with us on our podcast, providing insight to their perception of their season, what their bubble expectations are, and let us know their thoughts on the Suns from the outside looking in.

Sound like a good idea? Hopefully. You can listen to the conversations via our podcast, but we also look forward to providing highlights of those conversations here on Bright Side.

Kevin Broom, the deputy managing editor from the Wizards’ Bullets Forever SB Nation site, joined the podcast to discuss the Wizards season. He shared insight about the team that sits in a similar position to that of the Suns: on the outside of the playoffs looking in.

Should the Wizards be there?

It is the same question Suns fans were asking themselves when the NBA released their plans for the bubble. Like Garth Algar and Wayne Campbell, we were not necessarily sure if we were worthy. Both teams sit at the bottom of the list, seeing as they are the last two teams admitted to compete in Orlando.

Much akin to how I felt when Phoenix was selected, Kevin shared a similar sentiment. “I was surprised they got included.”

Washington finished the pre-COVID season with a 24-40 record, which placed them at 9th in the Eastern Conference standings. Although their offense had success early in the season, their defensive struggles merited a 29th ranking in opposing-points-per-game and last in defensive rating.

“They are by far the weakest team in the bubble,” Kevin said, sharing that, “I don’t think they really had a chance to force themselves into the play-in game.”

Their performance in the games that did not count, the Wizards went 0-3 in their scrimmage games, losing contests to the Nuggets, Clippers, and Lakers.

What’s one thing a Suns fan should know about the Wizards?

The Wizards play on the opposite coast. Unless you are a die hard NBA League Pass guy, you probably don’t spend much time engaging with the team. As the Suns prepare to play them for the second time this season (they lost 140-132 to the Wizards in quite the entertaining game non-overtime game on November 27), what should we expect? Who is this team as they enter the bubble?

Kevin reminded us of the absence of their primary scorers, noting that, “The guys that most people consider to be their best players, Bradley Beal, Davis Bertans,…they’re out. So the Wizards are kind of a glorified G-League team going into the bubble.”

Bradley Beal has opted out of playing in Orlando, as has Davis Bertans, both for their own personal interests. The two combined for 51 points on 16-27 shooting (8-14 from deep) against the Suns the last time they met. It is safe to say that the firepower that led 6th highest scoring team in the NBA (115.6 ppg) has been muted.

Who’s the one guy we should be watching?

We know it isn’t Beal and it isn’t Bertans, so who should we be watching? Who is the going to carry the offensive load? Who has the best opportunity to gain prominence for a positive bubble performance.

“The guy who is probably going to take on most offensive load is will probably be Rui Hachimura,” Kevin stated. “He’s mostly been like a mid-range kind of guy, not a very good shooter from three point range. He claims to have put on eight pounds of weight.”

The 6’8” rookie from Gonzaga, who was the first Japanese born player drafted in the first round, has put together a promising first campaign. He has scored 13.4 points-per-game and snagged 6.0 rebounds-per-game. He strong around the rim, with 15% of his drives resulting in drawing a personal foul (good for a 93%tile ranking and A rating from BBall Index).

Another player that Kevin told us to watch for is second-year shooting guard Troy Brown, Jr. Kevin pointed out that he, “is a guy who has been pretty good and I think people know that around the league but the message hasn’t quite gotten to the Wizards coaching staff. In the bubble he’s going to have an opportunity to show what he can do”.

This is the beauty of the interview, as I have no history with Troy Brown, Jr.

Have I heard of him? Sure. But I had no idea he was someone that Wizards fans felt deserved an opportunity but hadn’t received it as of yet. There is plenty to like about Brown’s progression as a player. The Wizards gave him 10 more minute-per-game this year and he took advantage of it, increasing in every notable category. Being stuck behind Bradley Beal is definitely a challenge, and the bubble will allow him 8 games to show the league who he is.

What is the benefit of the bubble for the Wizards?

Living at the bottom of the league without your primary scorers is a tough position to be in. You have to find the illusive silver lining. You must find purpose between the lines.

Kevin is looking as the bubble as a development opportunity for the Wizards. “Their rotation in the bubble is probably going be about 23 years-old on average. Seven of them are 22 and under.”

Suns fans have been there, haven’t we?

The Wizards will fill their lineup cards with young names like Jerome Robinson, Thomas Bryant, and Isaac Bonga. These players, who garnered plenty of playing time during the scrimmage games, are young and full of promise. Their roster currently reminds me of the Suns three years ago: young, developing, and guys no one else in the league gave much of a chance.

“It’s going to be interesting to see which of these young guys can actually sort of cement their role with the team.”

It’s a bold question, but given the odds that are stacked against them, it is worth asking. The Wizards start their schedule against the Suns on July 31, and then have to play games against Brooklyn, Indiana, Philadelphia, New Orleans, OKC, Milwaukee, and Boston. It is the 9th hardest strength of schedule.

“What I think is going to end up happening there in the bubble is that the records are going to be kind of flat. I don’t think anybody is going to go too hard. The teams that actually have something to play for will be trying to protect their guys for the playoffs.”

It is a similar argument that Suns fans are making as the team tries to make an improbable push to the post-season.

“A team that just plays with enthusiasm, which I would expect the Wizards to do they’ll probably pick up one or two wins. If they got three, I think that would be a surprise.”

Who are the Suns from a Wizards’ fan point-of-view?

We are blinded by the Suns light, sometimes lacking the ability to see the forest for the trees. Kevin’s insight from a far echoes what many have to say about the Suns this year, saying, “You guys were a little better than I thought you’d be at the beginning of the season. I like some of the talent there.”

One obvious topic for discussion when you get Suns and Wizards fans together is Kelly Oubre, Jr.

“Obviously the Wizards had Kelly Oubre for a little while. That was a very strange trade that they made,” Kevin said. “[Oubre] would be a really good defender if he would just play his position [instead] of run himself out of plays, which he does pretty frequently.”

Yes, the passionate Oubre can be over-aggressive and excitable. His high motor and energy has led to out of position moments, but overall his positive attitude and love for his teammates has made him a fan favorite in Phoenix.

Why did the Wiz trade him?

Kevin believes it was for a couple of different reasons. “I think that they were concerned about was the idea of paying him a big contract when they didn’t think he was all that good.”

“And at the time the Wizards had a big locker room problem. The words I’ve used to describe them at the time were ‘surly’ and ‘stubborn’. They had this ‘too cool’ vibe where they would get their butts kicked early and then they would just sort of coast.”

Kevin added, “Oubre was not part of that problem. He was a guy who played hard all of the time. But they felt that needed a more veteran guy and they liked the idea of getting Trevor Ariza back. They felt that his leadership would settle the locker room down. And I would say that that didn’t work out.”

Prediction for the game?

Kevin humbly informed us, “I would expect the Suns to win”.

Thank you to Kevin Broom for joining the Suns JAM Session Podcast and providing us a look at your team. It truly was a pleasure.

Let us know what you think of the idea of reaching out to other fan bases.

To hear the entire interview (beginning around the 25 minute mark):