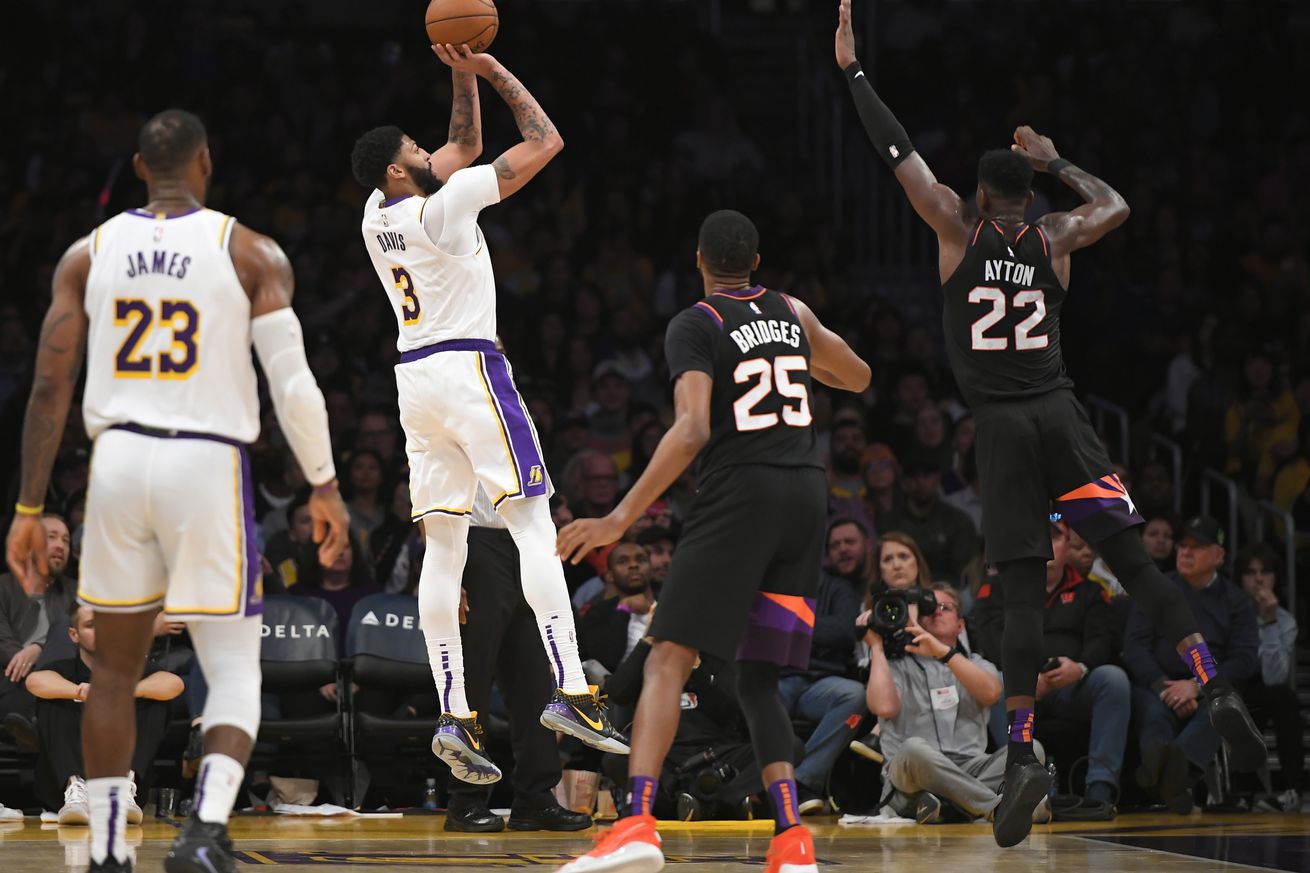 There is still a place for skilled, athletic bigs in the modern NBA, but the roadmap to them being featured pieces of championship teams is a bit more narrow.

The matchup between Bam Adebayo and Anthony Davis in the 2020 NBA Finals tells us two different stories about Deandre Ayton and his future in the league.

Both the Miami Heat and Los Angeles Lakers got to the Finals largely by downsizing, with Adebayo sliding to center in place of Meyers Leonard and Davis doing the same for much of the playoffs against P.J. Tucker and Nikola Jokic in back-to-back rounds. The two star bigs in the Finals are both 6-10 or so and supremely agile and skilled, but their styles and strengths are quite different.

Though both players fluctuate between both big man positions whereas Ayton is used as a true center, it’s likely both Davis and Adebayo spend the majority of their playing time at the 5 in these Finals. That’s where Adebayo has played almost exclusively in the Bubble, and it’s the position where Davis is best and where the Lakers become most flexible.

The most pressing thing to start with here is shooting, because it’s the part of Ayton’s game that’s generated the most debate and the area in which Adebayo and Davis differ most. The older Kentucky alum’s Kobe-like game-winner in Game 2 against Denver illustrated how he has grown as a jump-shooter and that he is now willing to take open threes and completely able to knock them down when he is. Davis has shot at least 33 percent from deep in each the past three seasons.

This is where Ayton wants to get, and he took steps toward this in the Bubble. But intriguingly, the way Pat Riley, Erik Spoelstra and Andy Elisberg built the Heat roster allows Adebayo to give value to Miami’s offense without shooting threes. Adebayo does that in a few ways, but as with everything for this overachieving Heat team, it’s inextricable from their coaching and roster construction.

Take for instance this simple set play in Game 6 against Boston. Jae Crowder screens for Adebayo to scramble the defense (and poke Daniel Theis out of the play) in early action, then Adebayo sets a high screen for Tyler Herro. Because of Herro’s versatile play-making ability, the Celtics want to prevent him from pulling up or getting downhill, so Theis blitzes the screen to push Herro above the arc even further. With impeccable timing, Adebayo slips the screen and gets into the teeth of the defense…

That means Theis is all the way outside the three-point line while Adebayo is charging down the lane. Jayson Tatum has by now smartly switched off Crowder to be in position to protect the rim from the weak side, but with Theis out of position and Adebayo wielding a head of steam and a size advantage over Tatum, the young Celtics star’s only options are to give up a hard foul or let Adebayo slam it in.

It’s only possible to generate good offense out of something so simple because of Miami’s personnel. While Andre Iguodala represented the one player Tatum could rotate off of, the Celtics could not even consider helping from the strong side because that’s where Duncan Robinson is stationed. Herro’s shooting and driving ability means that from the jump, Boston is already uncomfortable defending the pick-and-roll, which is why Gordon Hayward is on him and Kemba Walker is on Iguodala to start the possession. The Heat make teams uncomfortable, and Adebayo is able to take advantage.

Bball Index’s “Finishing At Rim Rating,” which adjusts for the degree of difficulty on at-rim finishes, places Adebayo in the 83rd percentile (basically even with the taller, longer Davis). While Adebayo grades poorly in the similar “Get To Rim Rating,” the Heat are able to put enough play-making and shooting on the court with him that Adebayo hardly has to do any work himself. But what we don’t see in the clip above is Adebayo’s supreme passing ability.

Part of why the Celtics stay home on Robinson, Herro and Crowder to let Adebayo sail in for a dunk is that he is perfectly capable of finding shooters himself. Even once Boston gets the ball out of Herro’s hands, the job of the perimeter defenders is not over. We can see Walker tell Tatum to slide in to stop Adebayo rather than Walker doing it himself for this very reason. BBall Index’s “Playmaking Talent” metric incorporates the volume of assist chances, the efficiency and value of each pass, and a player’s scoring gravity to show how much talent they flash as a passer. Adebayo is in the 100th percentile at his position.

The version of Ayton we saw at the University of Arizona looked like someone whose passing was bound to be a plus tool in the NBA, but while he’s a capable ball-mover, he hasn’t added the same sort of value in the pick-and-roll as Adebayo. Still, defenses reacted similarly to Ayton as they did Adebayo and some of the NBA’s best roll men. This is in part because the league doesn’t yet trust the Suns’ shooters. But watch here how much the Clippers collapse when Ayton runs a late pick-and-roll with Devin Booker.

Not only does Reggie Jackson leave Ricky Rubio, but Cameron Johnson is wide open on the left wing as well. Defenses understand the threat of Ayton on the lob and what Booker can do as a shot-maker, so they eliminate both of those options. Booker makes what becomes an incredibly easy pass to the corner where Rubio makes a shot he’s now punished defenses with for three years.

Imagine what happens when Ayton can make plays on the short roll, which is where Adebayo makes his living. Working with Mark Bryant this season allowed Ayton to make immense progress putting the ball on the floor to earn better post position and wield his athletic advantages more consistently in games. This is a great compilation of those shots.

While Ayton is admittedly far more awkward in these situations than Adebayo, another offseason of work and another training camp with Bryant should see progress in this area. The Suns want to run quick-hitting pick-and-rolls just like Miami does, and it’s the easiest way for Phoenix to involve its two best players directly in the offense. Opening up the floor for Ayton to make dribble moves and find shooters would make the Suns’ offense even harder to contain.

If Adebayo’s offensive game represents a logical evolution for Ayton that would allow him to succeed in the playoffs, Davis presents a challenge that Ayton will have to work incredibly hard to meet. Where Adebayo is the product of Spoelstra’s system and the Heat’s deep, versatile roster, Davis is a bailout for the Lakers in crunch time and in poorly constructed lineups. Fans may not have noticed Davis in New Orleans, but he’s been basically unguardable in isolation since 2016. The Lakers have had less overall depth and talent than their opponent the last two playoff rounds and yet Davis rising to the occasion as a consistent two-way force allowed Los Angeles to make it to the Finals playing only 15 playoff games.

Whether facing up or posting up, Davis is one of the hardest players in the NBA to guard. BBall Index’s “Total Iso Impact” metric grades players based on their combined isolation and post-up volume and shows that Davis scored 0.13 more points per possession than average. He is an incredible post passer, especially using his height and length to see over double teams and make smart plays (which is why his assists took a jump the past two seasons). And he shot nearly one free-throw for every two field goal attempts this season, by far a career high.

None of this sounds anything like Ayton. Understanding that Davis has been in the league eight seasons compared to Ayton’s two, the former is by far the more developed self-creator. What stands out from Davis’ performance in the semifinals against Denver is how he’s constantly able to keep his dribble alive, stay moving, and warp the defense to his liking. It’s positively LeBron-like.

On the other hand, Ayton rarely looks to pass from the post and often settles for bad shots because he lacks the ball-handling and shot-making touch that Davis possesses (floaters are another area Adebayo also has Ayton beat). In each of the past two seasons, Ayton has finished with more turnovers than assists, a huge blemish on his record if he’s ever to become a capable shot creator (though to be fair, Davis was on the same trajectory until his third season). BBall Index’s “Playmaking Talent” puts Ayton in the fifth percentile and he is in the first percentile in “Total Iso Impact.”

It’s easy to see how much AD has learned from LeBron as a post play-maker. AD makes the right play just about every time these days. pic.twitter.com/rNYK3CWfpU

The Suns have more of a chance to develop a deep roster than the spendy Lakers did, and continuing to focus on smart off-ball players like Johnson and Mikal Bridges is the right way for James Jones to build with Ayton as his second-best player. But it’s also dicey to imagine building a roster as versatile, smart and stacked with shooting as Miami’s. Far more likely is that a great team is built around its two stars, and that means the second star needs to be able to create his own shot against elite defense. Ayton is not close to that level right now.

Where Davis and Adebayo converge in their style and value is on the defensive end. In particular, Adebayo and Davis both excelled when it came to converting contests into blocks. Both were in the 86th percentile or above according to BBall Index, and both players also made defenses second-guess attacking the rim while they were on the floor, as illustrated by their “Rim Deterrence.” However, Davis outclassed Adebayo when it came to keeping opponents to lower-than-expected shooting percentages when he defended shots at the rim. Both Kentucky alumni are also supremely switchable and generated turnovers at a high level for big men.

Suns fans won’t want to see where Ayton ranks here. The Bahamian rarely created steals or deflections on the outside and was pretty hapless around the rim. Where Davis was in the 64th percentile in Rim Deterrence, which measures opponents’ attacking frequency, Ayton was in the 14th percentile. Ayton was also worse than both Finals bigs in turning contests into blocks and hurting opponent shooting percentage inside. Again, for a second-year player, Ayton’s progress is acceptable and even hopeful, but is behind where he needs to be if he’s going to anchor a championship defense.

The second round was a defensive masterclass for Davis, who not only routinely matched up with Russell Westbrook in the Lakers’ game plan but also overcame the Rockets’ floor-spacing to still make a difference as a rim protector. Davis showed that so long as your center is exceptional on both ends inside and does enough on the perimeter to not be a target, it still pays to have a huge, athletic dude on the interior, even against small teams in the increasingly perimeter-oriented NBA.

These are the two stories of these NBA Finals for Ayton: That it is still possible to use big men in a way that serves perimeter players and wins games in the playoffs, but that those big men must still be elite defenders and able to create shots, either for themselves, their teammates, or both. On that checklist of three elite skills, Ayton heading into his third season checks zero boxes.

NBA fans and front offices would have completely over-reacted had the smaller Rockets, Celtics or Clippers swooped into the Finals. This year’s matchup proves players like Ayton can survive, but the roadmap is increasingly specific and the bar extremely high for guys like him to take on a starring role on championship teams.