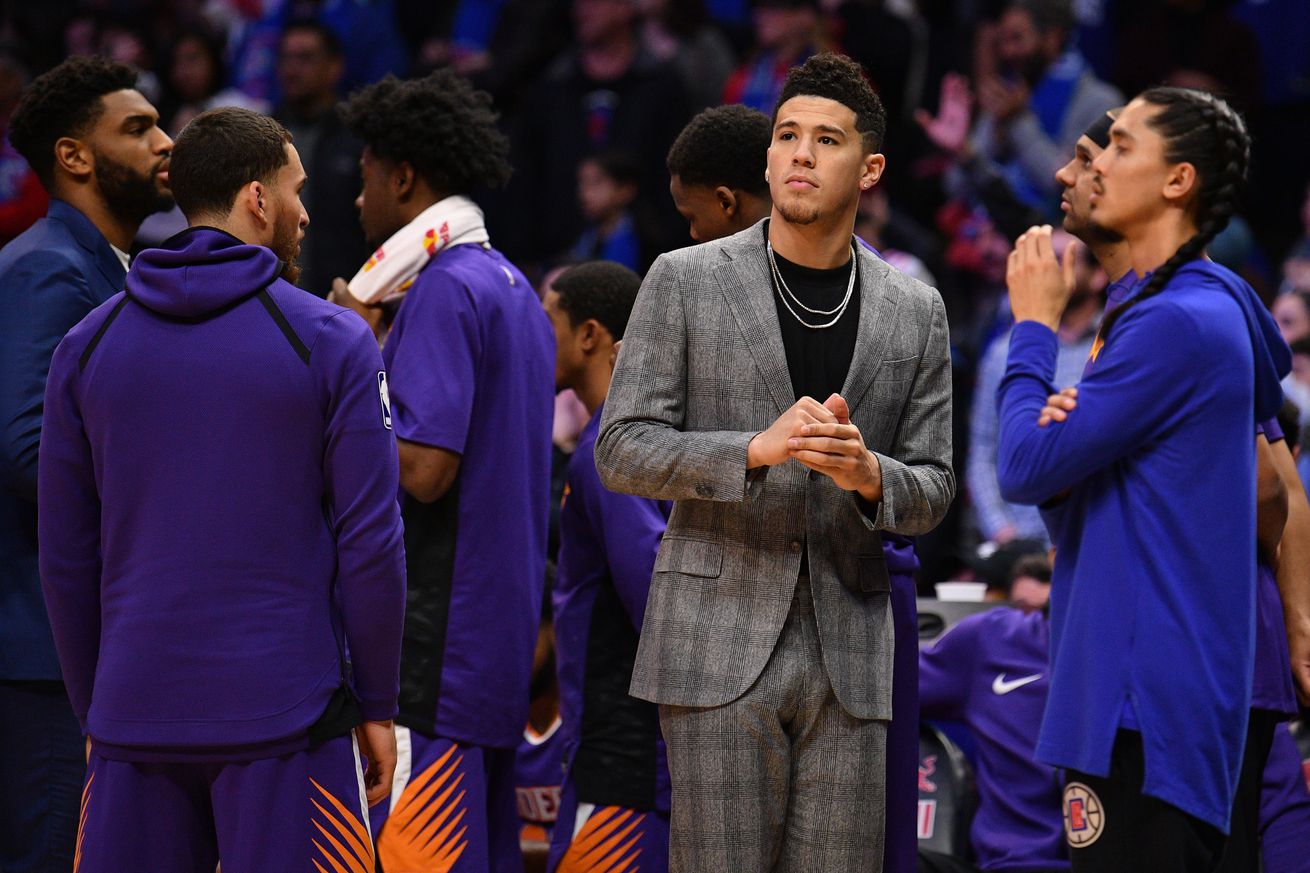 While in Orlando, the Timeshare Capital of the World, Devin Booker will have a chance to pitch the idea of coming to Phoenix to different players. What players staying at the Yacht Club should he have a 90-minute presentation with?

The Suns are heading to the Yacht Club! Yay!

Although is has a nice ring to it, the Disney Resort in which the Phoenix Suns will call home during the re-start of the NBA season is reserved for teams currently not seeded. All six teams residing at 1700 Epcot Resorts Boulevard will have their hands full as they attempt to break on through to the other side and into the playoff picture.

Twitter has had no shortage of jokes when it comes to these teams. From the food…

Suns players after losing by 30 and having to go back to sleep on the Yacht Club beds pic.twitter.com/8x1jCYN03N

…to the term “Yacht Club” itself:

From now on, we refer to teams stuck in the middle of the league (teams that aren’t quite good, but aren’t quite bad) as “The Yacht Club” https://t.co/0NLe0KVbLF

There is no doubt an uphill battle lies ahead. As the players are spending time (6-feet apart) at the Yacht Club, there is an opportunity. Suns star Devin Booker will be in the presence of numerous other teams and players. They’ll be playing lawn games, bowling, and fishing. Perhaps Booker can use this chance to recruit some upcoming free-agents to the Valley of the Sun!

I know that some of these scenarios are far fetched. It is 2020, however, which has taught us that literally everything is possible!

Mr. Booker, you will be in Orlando, the home of the timeshare industry. Put on your best suit, sit the following guys down for a 90-minute presentation, and sell them on coming to Phoenix!

Once upon a time Harry Giles was the top ranked recruit coming out of high school by ESPN. The 6’10” power forward committed to Duke and out-ranked Jayson Tatum, Lonzo Ball, Da-Arron Fox, and Josh Jackson.

His ESPN scouting reporting coming out of high school stated, “Giles’ upside is off the charts and with his talents he should be at or near the top of his class…It’s hard to find true power forwards who combine high level athletic ability, size and scoring skills with a desire to improve. A special talent and person.”

Unfortunately Giles has been plagued by injuries his entire life. He had a left knee injury his sophomore year of high school in 2013. He tore the ACL in his right knee his senior year of high school. Due to his high-risk status he went #20 overall in the 2017 NBA Draft to Portland, who traded his rights to the Kings. He has averaged 7.0 points-per-game in 14.6 minutes-per-game in his two seasons in Sacramento.

He will become an unrestricted free-agent once 2020 has ended.

Giles is an example of high-risk, high-reward. The Suns wouldn’t have to spend much to bring him in, he fills a need at power forward, and has upside potential. He is still just 22 years-old. The youth movement is something James Jones is moving away from, but if the money is right, Booker should recruit all night!

The 34-year old Belinelli, who was originally drafted 18th overall by Golden State in 2007, is nearing the back end of career. Couple that with the fact that he is an unrestricted free-agent entering next season. What am I getting at? There isn’t going to be a line of suitors looking to add his services. But there could be a Devin-Booker-in-a-suit!

What Belinelli brings to a team, besides his veteran presence, is viable bench scoring, especially from the shooting guard position. The Suns had no true back up for Devin Booker this year. Odd lineups that included undersized point guards garnered average results. The Italian sharpshooter could add some much needed offense to our second team.

He is a career 37.6% shooter from deep, although he is his averaged just 5.8 points-per-game this season. The pro to his dip in production is that, after making $6M this past season, he may have priced him right into the Suns range. The con, obviously, is that he could be past his productive prime.

He brings a championship pedigree, winning the Italian League Championship in 2005 and a ring with the Spurs in 2014. Perhaps Booker can be a champion of persuasion and talk him in to a trip to P-Town (a term literally no one uses for Phoenix. I don’t know why I typed it).

What two things continually are mentioned as areas of opportunity for the Suns? The power forward position and three-point shooting. Davis Bertans gives you both.

Bertans, who made $7.25M this year with Washington, will become an unrestricted free-agent at the conclusion of this season. The 6’10” power forward averaged a career high with 15.4 points-per-game this season, shooting 42.4% from downtown. He is a career 41.1% shooter from beyond the arc.

He does the majority of his damage off the bench, so if he is willing to come to Phoenix in the same role, he would be an ideal fit.

Plenty of NBA teams will desire his services. He may have priced himself out of the Suns market with his numbers, but if Devin puts together a colorful PowerPoint presentation with cool sounds and engaging transitions, he may sway Davis’ mind.

The 7’0” center who turned 31 just days ago will most likely find himself seeking a big deal, so this is clear wishful thinking on my behalf. I’d prefer if Booker spends his time trying to get Dame Lillard to join the Suns, but his contract is hefty and extremely back loaded ($54M player option in 2024-25?!). So I’ll make a Whiteside case.

There is no chance of bringing Whiteside to the desert if he expects to earn $24.6M like he did last year with Portland. I’d like to know what Pat Riley was smoking when the Miami Heat signed him to a 4 year, $96M deal in July of 2016. His last name isn’t “Upside”.

Whiteside, who is set to become an unrestricted free-agent, had a solid season playing for Portland. He started 61 of the team’s 66 games this season and posted a career high in total rebounds with 14.2 per game. He also led the league with 3.1 blocks-per-game as well.

He would be an interesting fit with the Suns. He could mentor and assist Deandre Ayton’s growth, especially defensively. The team would most likely ask him to come off of the bench, but imagine if he got the starting nod and DA moved to the four. I could write five paragraphs speaking to the pro’s and the con’s of that situation, but I shall refrain. We both know Whiteside isn’t coming here.

The cap situation this upcoming off season is unique, and guys looking to cash in may sign one-year deals and wait until next year. Could this be the selling point Booker needs to drive the sale home?

Again, wishful thinking. We know it isn’t going to happen, but it would be fantastic if somehow it could.

I’ve loved Brandon Ingram since his days at Duke. Long (6’7” with a 7”3” wingspan), athletic, and lethal, B.I. has grown into an All-Star since joining the New Orleans squad. He averaged 24.3 points-per-game this season, increasing his efficiency from three and averaged a career high in rebounds, assists, win shares, and usage percentage. He is a superstar in the making.

I salivate over the though of bringing him to Phoenix. Granted, he will be a restricted free-agent, and the qualifying offer for his services from New Orleans will be $5.9M. He’ll go for much more than that.

Will the Pelicans pay him is the question? My guess? Oh, hell yeah. The Pelicans have the money to offer him a max contract. And they should. If not, Devin Booker could talk him in to the beauty of an Arizona sunset. And a mid-level contract.

Devin, don’t spend your time working these guys over on Call of Duty: Warzone. Sell them on coming to Phoenix!

Your presentation is now over. Here is your $100 VISA gift card and enjoy your stay!