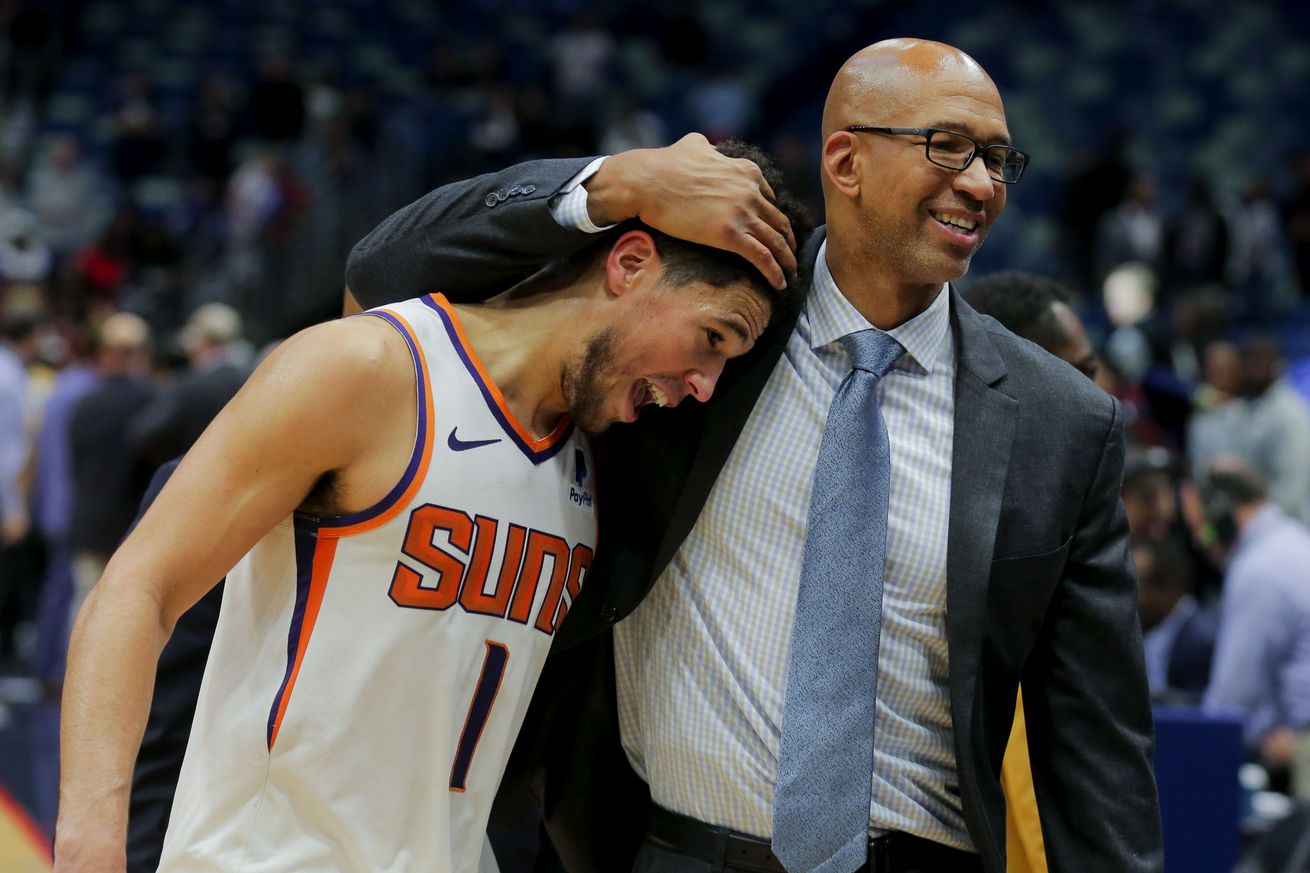 The Coach of the Bubble went on NBATV’s Gametime late last week to discuss his Sunderella Suns unexpected charge into relevancy, and what’s to come next season now that people have a playoff-level expectation of his Phoenix Suns.

“Channing you know,” Suns head coach Monty Williams said to one of the panelists, Channing Frye. “Because you and I were together in Portland, what that’s like when you’re changing a culture and you’re starting to win games, that next step is a lot harder.”

Williams was an assistant coach under Nate McMillan from 2005-2010 as they rebuilt the culture of the Blazers from their embarrassing “Jail Blazers” stint, beginning with draft picks like Brandon Roy and LaMarcus Aldridge.

“I can remember when we had all of you young guys in Portland,” Williams said. “We added Andre Miller, James Jones and Juwan Howard and those were the right moves for us because the culture didn’t change but it brought the right level of professionalism and consistency and brought experience.”

James Jones was added for the 2007-08 season when the young Blazers jumped from 32 to 41 wins. The next year, they pushed that up to 54 wins with a ton of youth that had only Steve Blake (28) and Joel Przybilla (29) over the age of 24. Draftees Greg Oden, Nicolas Batum and Rudy Fernandez had major impact as rookies around the Roy/LMA core, as well as young vet Channing Frye fresh off the Knicks.

This is where Monty Williams says those Blazers needed more consistency, professionalism and experience to maintain and/or improve on that surprise 54-win season. Ahead of the 2009-10 season, just as Frye exited to become a three-point bomber in Phoenix, they added Andre Miller, Marcus Camby and Juwan Howard to prime for a conference finals run.

Unfortunately, 2009-10 was the beginning of the end for that iteration as Brandon Roy and Greg Oden suffered career-ending injuries. They fell in the first round of the 2010 playoffs to the Phoenix Suns as Roy only made it into one playoff game and Oden hardly played that season at all.

But let’s not talk about those injuries. Let’s talk about the rise of the Blazers from JailBlazers to well-respected perennial playoff contender. The parallels from the 2007-2009 Blazers to the 2019-? Phoenix Suns are uncanny.

Check out Portland’s leading scorer, Brandon Roy, during that run. He made his first All-Star team at age 23, just like our own Devin Booker. If he hadn’t developed such degenerative knee issues, we might be talking about a Hall of Famer.

The Robin to Roy’s Batman was big man LaMarcus Aldridge, drafted a year after Roy. He was allowed a quiet start to his career, behind Zach Randolph, but then took a big role starting in year two. Aldridge made his first All-Star game in his sixth NBA year, 2012, the first of seven in the next eight seasons.

Looking only through 2007-08, you can see the similarities between Roy/LMA and Booker/Ayton right? Roy developed faster and was more mature, while LMA used his sheer size and raw talent to be the No. 2 on his team after being extremely high in the draft (second overall).

In their rise up the Western Conference ladder from 32 to 41 to 54 wins, Roy and Aldridge were surrounded by switchable young role players (Martell Webster, Travis Outlaw, Jarrett Jack, later Nicolas Batum), while always having a veteran point guard to run the show (Steve Blake, Andre Miller) and a veteran big man anchoring the defense at least in a backup role.

“We know that we’re going to have to make good decisions going forward,” Williams said. “And James is already working on that.”

Monty Williams is not talking about upending the Suns young roster. He doesn’t want to change the power source, but rather wants to work around the edges with those veteran voices of reason. He already has his Andre Miller/Steve Blake type with Ricky Rubio. Now they just need to either bring back or replace the Aron Baynes voice and impact. And maybe add one more sage veteran with deep playoff experience, even if he doesn’t play a lot.

Williams’ job is to continue to develop the young core as the leaders of the future. The Suns are only going to go as far as Devin Booker, Deandre Ayton and Mikal Bridges take them, along with the other young players. Booker and Ayton are the centerpieces like Roy and LMA once were. Mikal Bridges is the new Nicolas Batum. Cameron Johnson is the post-Blazers Suns’ version of Channing Frye. That Portland team also had Oden, Rudy and Martell Webster developing too.

It’s Williams’ job to get the most out of the young players on his roster and to do that he has to convince them that the road only gets harder as more teams are ready for them on a night-to-night basis.

“For me, it’s getting our guys to understand this next step is a bigger step,” Williams said. “And it’s gonna take a lot more work and we’ve got to continue to do what we’ve done. We can’t get drunk off of this success.”

Indeed, the Suns cannot be satisfied with almost making the playoffs. The players and coaches returned home last Friday after being eliminated, and this week the playoffs started in earnest without them. Watching young guards like Donovan Mitchell, Jamal Murray, Luka Doncic and Shai Gilgeous-Alexander having big days in the Bubble should be fueling Devin Booker to accept nothing less next season.

The Suns know they can beat those bottom-seeded playoff teams and that they can’t suffer growing pains again next year. Their expected win-loss in this 73-game season was 37-36 which would have put them smack dab into 8th. But the actual record of 34-39 left them half a game out of the running (remember there were an odd number of total games played this year due to the pandemic in March 2020; teams finished with 73-76 games played)

Next year, the Suns can’t let it get that close.

“This has been cool but the reality is that we are not in Orlando,” Williams said of missing the playoffs. “And that should hurt our guys in a good way. I’m hopeful they feel that. I’m hopeful that this time away from Orlando will spur them to work even harder and be more diligent about preparation and hopefully we are one of the eight teams in the mix the next time around.”

Let’s hope the Suns can mirror Portland’s rise into playoff contention a decade ago (minus the injuries, of course). Monty knows the indicators and how to grow players into perennial winners. General Manager James Jones spent the back half of his career teams as that bit player veteran who helped create a championship culture, making the NBA Finals in each of the last seven years of his career.

No let’s see it in Phoenix. We are starved for success!

Here’s the full interview. Monty’s talk about the future starts about four minutes in.