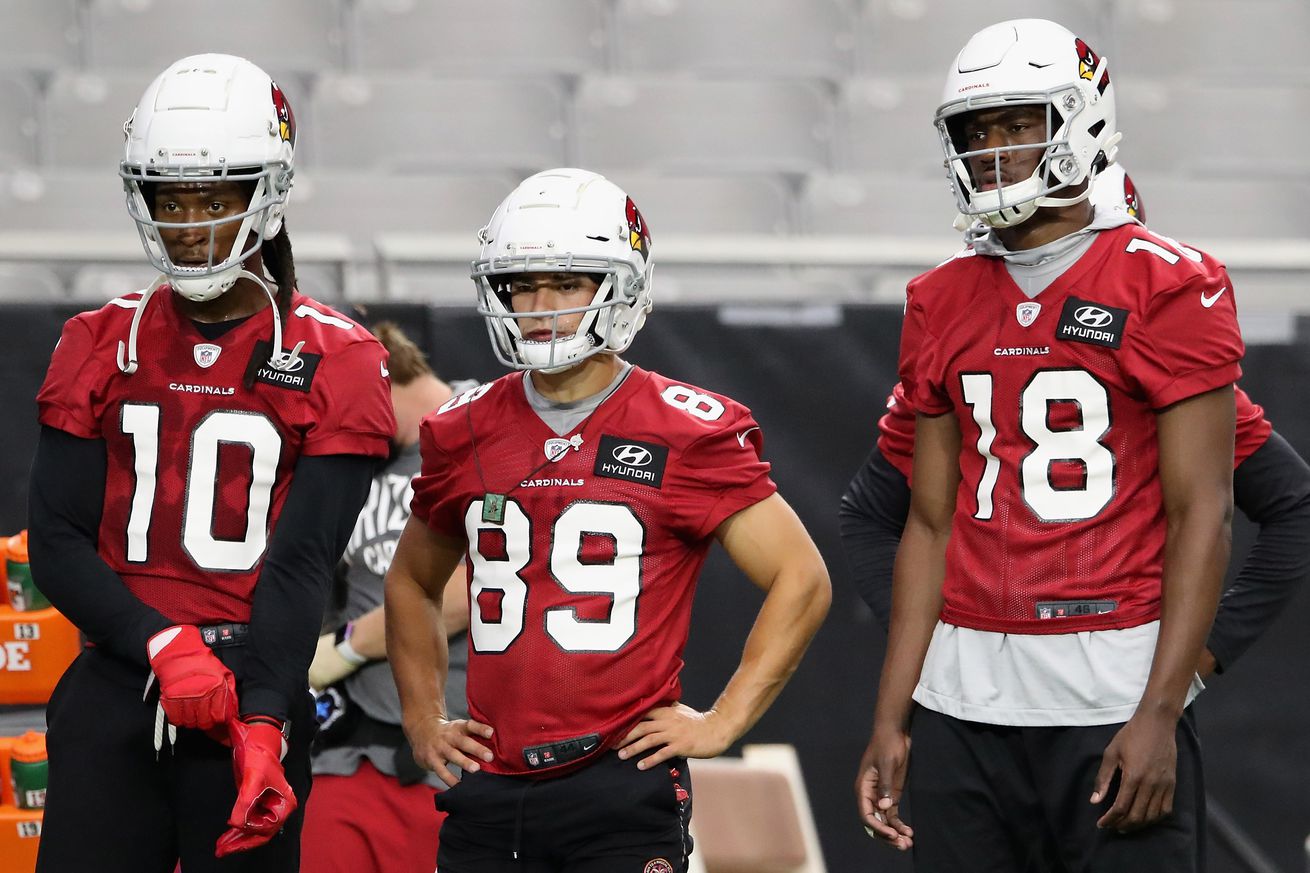 With the trade acquisition of All Pro WR DeAndre Hopkins, the Arizona Cardinals are expected to field one of the top 5 WR units in the NFL.

There has been recent camp talk about the Cardinals’ potential to generate three 1,000 yard seasons from Hopkins, Larry Fitzgerald and Christian Kirk—-Kyler Murray believes it’s quite possible—-and perhaps so does Kliff Kingsbury, although he tempered his outlook of a three 1,000 yard WR feat with the caveat, “it depends on how much we throw the ball.”

With DeAndre Hopkins, no one questions the young star’s brilliant ability to shake free from defenders to snatch any pass thrown within his exemplary catching radius.

Thus far, Hopkins has been providing excitement and leadership, not only within the WR unit, but for the entire team—-and perhaps most especially with QB Kyler Murray whom Hopkins expects will become his new and log-term “best friend” in Arizona—-this, as Nuk awaits the multi-year double digit million dollar contract extension that he was expected to receive as a condition of the trade.

What Hopkins wants is a new cache of guaranteed money—-which is why he was asking the Texans to rip up his previous, lucrative, front-loaded five year $81M contract because the guaranteed money had run out.

But, to be perfectly honest, Hopkins’ new contract demands to the Texans after collecting all of his $49M in guaranteed money by the end of the 2nd year of his 5 year contract is every NFL team’s dread. When teams sign their top draft picks to handsome second year contracts, they expect the players to honor the contract.

Imagine what would happen if every player on the roster who is coming off a productive season demanded a new deal and threatened to hold out if he doesn’t get one. Therefore, it would behoove the Cardinals to spread out the guaranteed money attached to Hopkins’ new contract, so that Hopkins doesn’t put the Cardinals in the same kind of bind he created for the Texans.

While it may be easy for Cardinals’ fans to chalk up Hopkins’ departure from the Texans to his apparent disconnect with HC Bill O’Brien—-the question that Cardinals’ coaches, teammates and fans may also need to consider is how will it feel if Hopkins decides that, as he did in Houston, he should be permitted to sit put of practices during the game weeks in order to rejuvenate his body?

Anyone who has coached and/or played the game of football understands the gravity of this question. While former NBA star Allen Iverson made his attitude clear about the relative insignificance of “practice” as compared to what happens in real games—-the old adage of “practice makes perfect” is difficult to dismiss, particularly an offensive scheme like the Cardinals’ K-Raid which requires keen attention to detail and precise timing.

Hopkins sat out of yesterday’s practice due to hamstring tightness, mostly as a precaution. But, Hopkins also knows right now that he has to be careful not to get injured while he waits for the Brinks truck to pull up to State Farm Stadium with his G-cash.

That is entirely understandable—-although on the other side of the ball, Patrick Peterson is in the same boat, as all of the $47.4 M G-cash from his lucrative second contract has been paid in full and Peterson is playing this season on a $12.05 M base salary, plus other bonuses that can kick up the total to $13.2M

The Cardinals’ plan in the K-Raid is to isolate DeAndre Hopkins on one side of the field—-which has Kyler Murray extremely excited because he gets to throw repeatedly to Hopkins in isolations. Murray had decent success throwing to Damiere Byrd in that role last year, thus one can just imagine what he will be able to do with Hopkins.

Furthermore, Murray pointed out recently that last season none of the team’s opponents ever double teamed the single WR because the FS would shade to the side of the “trips” (3 WRs—-or 2 WRs and TE to one side).

Thus, if the FS shades toward Hopkins, this could mean quite a spike in receptions for Larry Fitzgerald, Christian Kirk , the #4 WR and TE.

For Larry Fitzgerald, this season will be the first time in his 17 year career that he is not the bell cow #1 WR on the team. However, the timing of the addition of DeAndre Hopkins for Fitz appears to be auspicious, especially for a player who is chasing Jerry Rice’s record for the NFL’s all-time lead in career receptions. Where teams often bracketed Fitz in the past, with DeAndre Hopkins opposite him, Fitz is apt to find himself one on one in coverage more often than ever before.

Fitz typically takes off one practice during game weeks—-but he remains the consummate pro when it comes to practice.

Kliff Kingsbury believes that Christian Kirk is poised to have a breakout season this year, Kirk’s 3rd in the NFL. Last season, Kirk increased the receptions from his rookie season from 43 to 61, his receiving yards from 590 to 709 and his rushing yards (reverses) from 35 to 93. Although, what was frustrating for Kirk and the team was his inconsistency from game to game.

Many NFL scouts believe that Christian Kirk’s best fit is in the slot, where he can use his quick feet and slipperiness to his advantage. However, thus far, with Fitz commanding the majority of snaps in the slot, Kirk has been comfortable playing wide. In my opinion, if Christian Kirk is ever going to cross the 1,000 yard season threshold, he will need to adopt and embrace a more diverse role as a combo X-Y-Z WR.

At this point it appears that the #4 WR spot is a two way battle between 2019 draft picks Andy Isabella and KeeSean Johnson. Isabella’s pure speed and home run ability should make him the favorite, although Johnson’s size and all-around skills are impossible to ignore.

Cardinals’ WR coach David Raih recently expressed his confidence in Andy Isabella’s natural talent and Fitz-esque work ethic. In Raih’s one year as the Packers’ WR coach, here is what the folks at USA Today’s Packers Wire had to say when he was signed by the Cardinals:

“Last season, Raih was the position coach for Davante Adams’s career year. He also oversaw the development of rookies Marquez Valdes-Scantling and Equanimeous St. Brown, who played a significant amount of snaps after the Packers lost Randall Cobb and Geronimo Allison to injuries.”

Some quick notes on Johnson, Butler, Dixon and Sherfield:

During my interview with former Cardinals’ QB Kyle Sloter the young WR he raved about more than any other was KeeSean Johnson, lauding Johnson’s size, superb route running and natural hands.

Despite trade speculations, Hakeem Butler bring prodigious size, 4.45 speed and toughness to the position. He needs to find a niche within the offense and in some capacity on special teams. It would be fascinating to see Butler evolve as Fitz’s understudy in the slot. When Butler had the ball in his hands at Iowa St., he loved to run over free safeties, a physical part of the game that Fitz consistently showcases. Obviously, Butler needs to hope that being around Fitz will help him catch the ball more consistently.

Kliff Kingsbury recently mentioned Johnnie Dixon (the one-time Ohio St. captain and Cardinals’ 2019 practice squad speedster whom the scouts at Lindy’s believes has T.Y, Hilton type talent) as a viable candidate for the punt returner job. Landing that role could win him a roster spot.

Trent Sherfield stood out as an up-and-coming WR in pre-season last year, but was inconsistent as a situational receiver in the offense during the season. What is intriguing about Sherfield is his toughness and how that might help him find his niche as a slot WR—-a position in the offense that the Cardinals’ coaches have been trying to bolster, as evidenced by the number of slot type WRs they have been bringing in for workouts recently.

For much of the vast majority of games last year, the Cardinals kept 7 WRs on the roster (Larry Fitzgerald, Christian Kirk, Damiere Byrd, Andy Isabella, KeeSean Johnson, Trent Sherfield and Pharoh Cooper) and typically they kept 6 of them active on game days.

If the Cardinals decide to stick with 7 WRs on the roster this year, whom do you think the 7 WRs will be?

In my opinion, if Trent Sherfield wins a roster spot, as is expected, for his strong work on special teams, the 7th WR spot is likely to come down to a decision between Hakeem Butler and Johnnie Dixon.

If that’s the scenario—-do the coaches pick Butler or Dixon—-or do they go with another WR via trade or waivers?