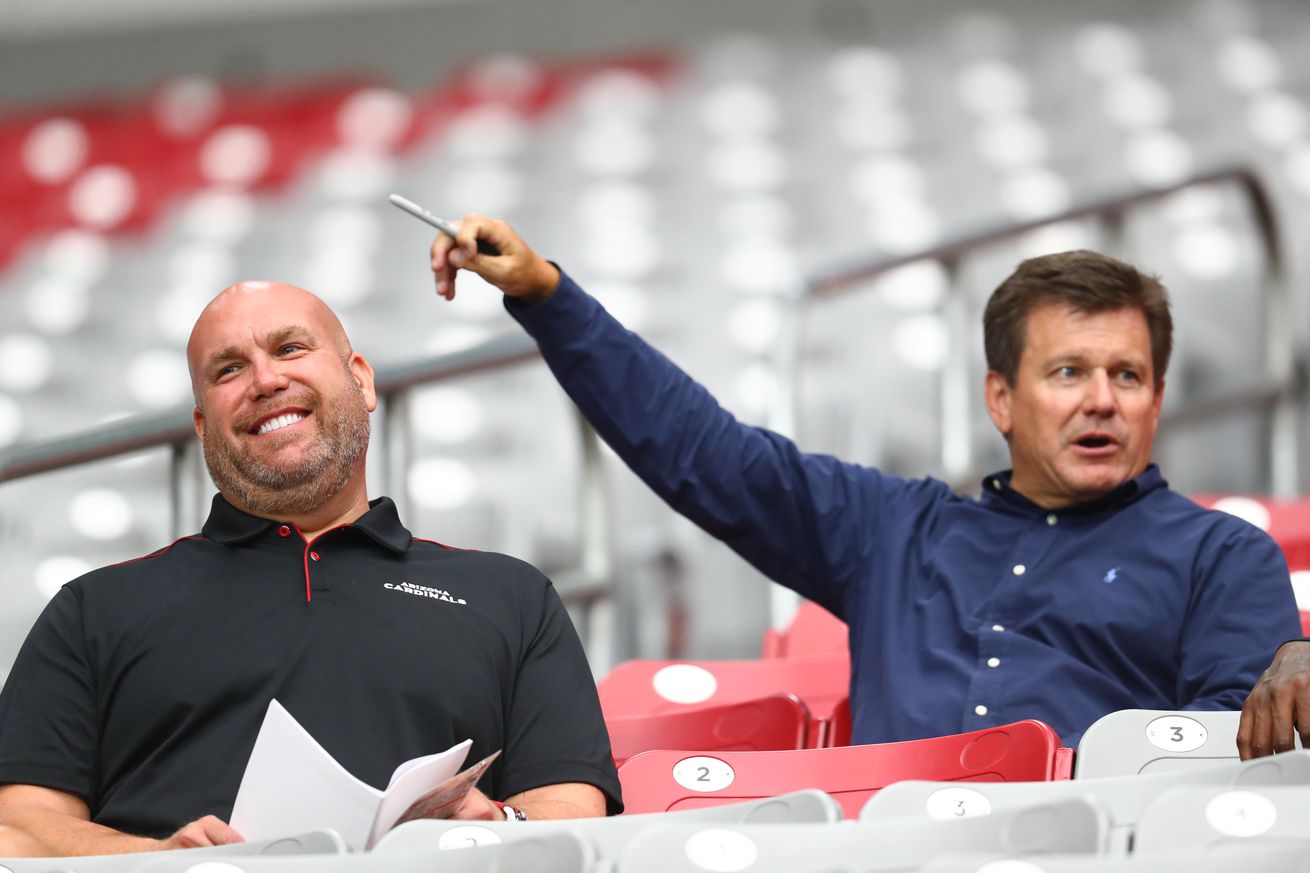 The Maligned Cards GM is off to a great start, but what must he STILL do to win back the fans who may have jumped ship?

Cardinals GM Steve Keim’s had one roller coaster of a career.

From spending 20 years as a scout to earning the NFL GM of the Year award from the associated press and, alongside Bruce Arians, building a veteran team w/ young mid-round playmakers that went 13-3 and went to the NFC Championship to…the #1 overall pick on a talentless team featuring Sam Bradford, Josh Rosen and Mike Glennon as quarterbacks.

There’s been acclaimed trades, like a 6th for Carson Palmer or a 2nd and Jonathan Cooper for Chandler Jones, but there’s been a score of 1st round busts and a history of poorly performing offensive linemen as well. Not to mention the turnaround that saw Bruce Arians retire and then…not stay retired but instead leave to the (not Tom Brady-led) Tampa Bay Buccaneers and moved on to Steve Wilks and Mike McCoy.

There’s been more twists and turns to his career than a daytime soap opera.

And yet now at the reckoning he comes off of a promising year building with a new head coach in Kliff Kingsbury and a new starting (and reigning Rookie of the Year) Quarterback in Kyler Murray.

Keim began his offseason with an incredible flourish with the D.J. Humphries’ extension at a reasonable rate. He’s since followed it up with these moves:

Fantastic start. But the work is just beginning. Here’s the 3 things Steve Keim needs to do to earn his way back into the good graces of Cardinals fans. Fortunately, they’re not hard…

#1: Hit on his draft picks & future moves this year

Keim’s got only 6 picks left in this draft and a HUGE gap between pick #8 and pick #72. If the Cardinals can hit on both of those picks with rookie impact, they might look like a scary team.

If they draft two players who fall below expectations…then you’ll start seeing comparisons to 2016 Keim, a man who traded a 2nd and acquired Chandler Jones only to follow it up with…a motorless & injury prone poor schematic fit in Robert Nkemdiche and a running back who’d played cornerback for only 1 season in Brandon Williams.

Keim’s got a narrative to re-write, and many would argue it’s his biggest one. I still see fans who send out tweets saying “Don’t give Keim more picks, he can’t handle them unless it’s Kyler” or the like.

Keim’s said he believes a team builds through the draft and not through free agency. While the draft is a crapshoot, the absolute job of a GM IS to evaluate talent and improve a team though additions, so there’s no excuses given that Kyler Murray’s on a cheap rookie deal

#2: Ensure he has the right man (and talent) for the defense

The Arizona Cardinals had the 23rd ranked run defense and 31st ranked pass defense in the NFL in 2019.

There’s nowhere to go but up, one could argue. The team played a TON of soft zone and rarely blitzed, and was missing Patrick Peterson for 6 games along with Darius Philon and Robert Alford for the entirety of the season.

Not to mention, they released veterans Terrell Suggs, D.J. Swearinger and Tremaine Brock for poor play.

What they didn’t change, for better or worse, was their defensive coordinator Vance Joseph.

Joseph was maligned and (perhaps his coming over from the same Denver team that brought Arizona former OC Mike McCoy wasn’t a great start) but the unit he set out after losing Patrick Peterson gave up some 30+ points a game. In the end of the season, though, they tightened up and started playing better and even got back to a bit more physical style of defense.

That said—2019 is 2019. And 2020 is a new year. It could be that Keim’s choice pays off and sticking by him ends up being the correct, long-term approach to add talent and give time.

OR it could turn out to be just like 2019’s defense with the same mind-boggling decisions, poor play and a scheme that quarterbacks pick apart. If Vance Joseph showcases the latter and it becomes apparent the Cards need a new direction at DC very quickly…it will mean a do-over at learning a new defense AND reflect negatively on yet another Steve Keim choice.

Likely, he’ll get blamed for Vance and Bidwill will get credited more for Kingsbury and Murray and fans will be right back at the neck of the GM. Keim needs to ensure he gets Vance the guys he needs to make his defense work in the draft or before the season…and then see Joseph put up results.

#3: Make key moves pre & in-season to push the Cardinals into the playoffs…and win a playoff game

Last year Steve Keim, in-season, essentially went 3 for 4 when it came to the most important needs and holes to fill on the team.

He signed 2 players that were crucial additions to the team (Justin Murray and Maxx Williams and made a trade for one in Kenyon Drake.

The other in Michael Crabtree flopped like a fish on dry land.

If Keim’s going to ensure that the team can make a playoff push with an additional playoff seed (and 3 wildcard games) amid a stacked NFC West, he’s going to have to make at least one midseason “splash” signing like he did last year.

The easiest example that comes to mind of an “over the top” move like that? When he signed Dwight Freeney as a pass-rusher off the street to fill a massive need on 3rd down during the team’s 2015 run.

Likewise, there’s bound to be injuries or an exposed hole in the team’s construction once the games begin.

There’s opportunity, for sure, with the Niners losing defensive players amongst a QB that his head coach barely let throw in the playoffs, the Seahawks trying to piece together their defense and add some protection for Russell Wilson and a Rams team that just lost 5 defensive starters, their defensive coordinator, Todd Gurley, and their sweet logo.

If Keim is able to swing a “go for it” deal similar to what last year’s Niners did by adding Emmanuel Sanders and hits it out of the park, he’ll likely have re-earned himself in the eyes of probably all fans to that degree.

What CAN’T happen is a move like the Patriots did in trading a 2nd round pick for Mohammed Sanu and then finding themselves with Tom Brady moving to another team and a lack of ammo to move up for a quarterback…and still a desperate need at wide receiver.

Keim will have to calculate carefully but…if he can hit a homerun in all 3 areas and the Cardinals are able to, in spite of it all in the NFC West, make a playoff spot….then perhaps all won’t quite be forgiven.

BUT perhaps there’s fans who’d see this as a story of redemption for their general manager. Redemption in turning a page on the darkest part of his life and securing the Cardinals a second chance to get back to their winning ways.

And if that can happen and he can shake it in the faces of doubters as proof that he’s a quality NFL GM…I’d be the first to hope to see it.