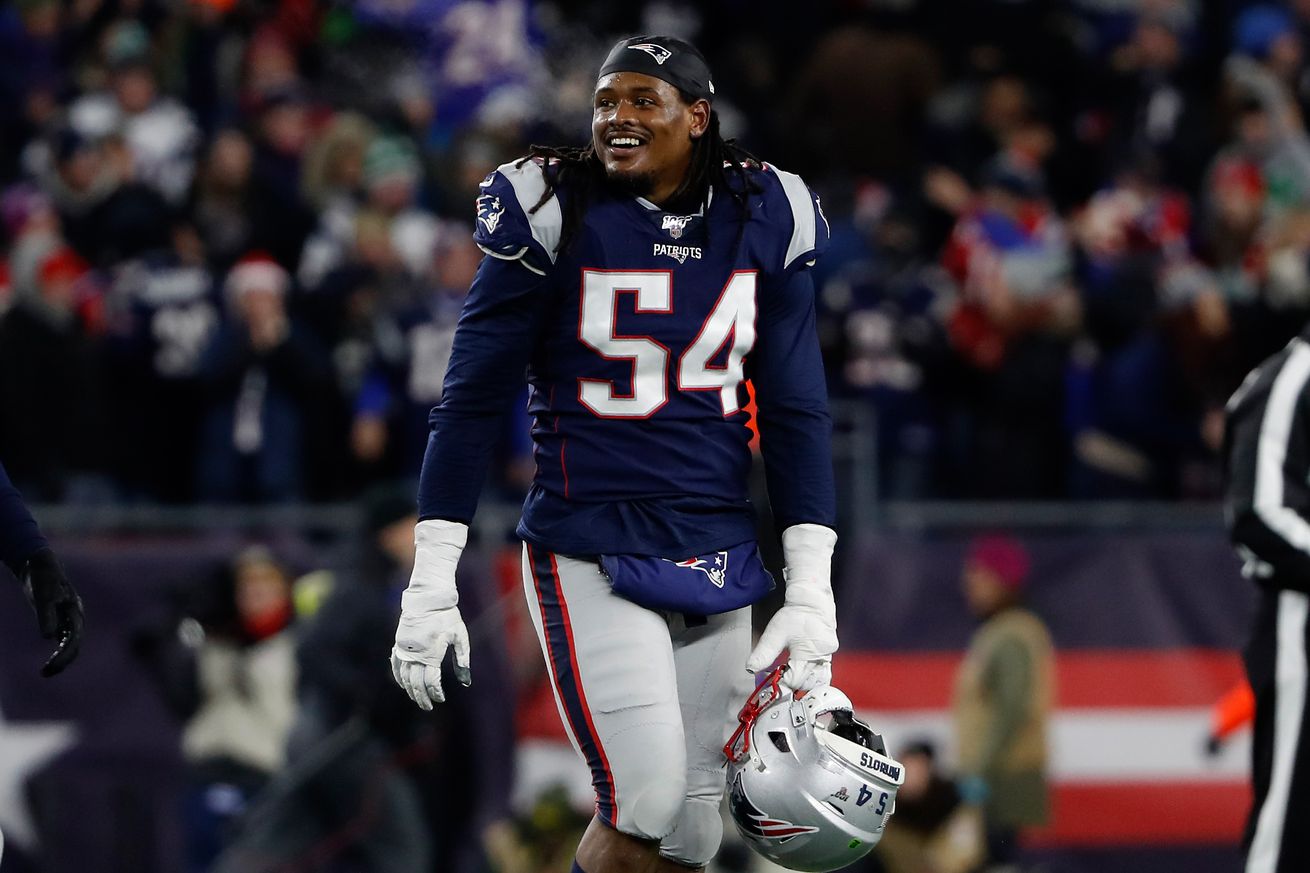 Patriots LB Dont’a Hightower is one of the biggest names to opt out of the 2020 NFL season so far. Could any Arizona Cardinals join him in missing the season? | Winslow Townson-USA TODAY Sports

NFL players are starting to opt out of the 2020 season due to concerns about the coronavirus. How might this impact the Arizona Cardinals?

The COVID-19 pandemic has already had myriad effects on the 2020 NFL season (assuming we get one): remote draft, virtual offseason, canceled preseason. Another effect that is making waves this week is player opt-outs.

Basically, any player can opt out of the 2020 season either voluntarily or as a “higher-risk” player. The contract and financial ramifications are different depending on the type of opt-out. You can read about the particulars and see the current list of opt-outs here:

There hasn’t been a superstar-type player to opt out (yet), but there are still some important players. Dont’a Hightower is a Pro Bowler and the quarterback of the Patriots defense. Eddie Goldman is the linchpin of the Bears defensive line. Nate Solder is the Giants’ starting left tackle. Damien Williams was a postseason hero for the Chiefs during their Super Bowl run. These are important players their teams will miss.

Although Cardinals have opted out yet, it’s fair to assume someone will before the August 4 deadline. We have no idea who it will be, but it will be someone (or two). As an exercise, I used a random number generator to pick the jersey numbers of five Cardinals who could hypothetically opt out this season. (Note: I did not consider practice squad–type players or players unlikely to make the roster anyway.)

Who were the players? How would their absence impact the team? Let’s find out.

First up is Bullard, who figures to be in the mix—if not the frontrunner—for the other starting DE spot opposite Jordan Phillips. Bullard was a key rotational piece on the D-line before a hamstring injury ended his season early in December. His stats don’t jump off the page (22 tackles, 1.5 sacks), but he started 6 games and played well enough.

If he were to opt out, the presumptive starter would be 2nd-year player Zach Allen, who is coming off an ineffective and injury-plagued rookie season. Allen, a very productive college player, only appeared in 4 games (starting 1), registering just 8 tackles. Depth behind Allen is thin, with fellow 2nd-year player Michael Dogbe the only other DE who has with any experience. Rookie DT Rashard Lawrence could also slide over and play some DE.

The defense would survive Bullard’s absence, but the DE rotation would be a weak point and an area for GM Steve Keim to address once after roster cuts.

Although Edmonds is a backup and Bullard is a possible starter, the RB’s absence would hurt a bit more. Edmonds showed signs of a true breakout last season (126 yards and 3 TDs against the Giants) and likely had earned himself a solid role in the offense behind Kenyan Drake. I could see 8-10 carries a game for Edmonds, with some possible goal line work as well. He’s a valuable part of the offense.

Without him, 7th-round rookie Eno Benjamin and journeyman D.J. Foster (Go Devils!) would have to step up. The team is excited about Benjamin, but is he ready to handle 8-10 carries per week? Foster is more of a pass-catching RB, but I could see him leapfrogging the rookie for touches. There are several underwhelming veteran free agents available (Devonta Freeman, Lamar Miller, LeSean McCoy). Might Keim bring one of them in if Edmonds were to opt out?

Again, this would be a survivable absence, but the team would definitely have to change their offensive plans a bit without their top backup RB.

Sweezy started every game at RG in his first season with the Cardinals in 2019. He wasn’t exactly a world-beater, but he provided above-average play (61.6 PFF grade) and helped stabilize an O-line that was greater than the sum of its parts in paving the way for the #2 rushing attack by DVOA. It’d be tough to replace a starting guard this late in the offseason (a problem the defending Super Bowl champs are having to deal with).

The next man up would seem to be veteran Max Garcia, who has 41 career starts to his name and has familiarity with OL coach Sean Kugler from their days in Denver together. The team could also possible slide Mason Cole over to guard if they feel 2nd-year man Lamont Gaillard is ready to handle the starting center job. Keim could also try to find a stopgap option after cutdown day as well.

This would be a tough absence to overcome. Our O-line isn’t the most talented in the league, but the cohesion they developed last year turned out to be a major strength of the offense. That could all unravel if a player like Sweezy were to opt out.

Murphy is the youngest randomly selected opt-out so far at just 22 years old. He had his struggles last season as a rookie, but that valuable playing experience (he started all 16 games) is expected to pay dividends in his second season. Ditto his expected move into the slot, where the team had planned to play him as a rookie before injury and suspensions forced him outside. Murphy is supposed to be a big part of a hopefully greatly improved secondary, so his loss would be tough to swallow.

The CB cupboard isn’t exactly bare—behind starters Patrick Peterson and Robert Alford are Chris Jones and Kevin Peterson, who were both adequate in limited playing time down the stretch last season. But the team obviously wouldn’t want to rely on them for the full season, so Keim might place a call to Logan Ryan’s agent about a 1-year deal. Ryan is a productive veteran slot CB and could help assuage the loss of Murphy for a year—although Keim would likely have to find a way to clear some cap space.

Again, this wouldn’t be a crippling absence, but it would hurt more than the rest due to the loss of development time for a recent high draft pick.

This one was unexpected. I wasn’t thinking about special teamers for this exercise, but, hey, kickers are people, too! Former Sun Devil Gonzalez had a rocky start to his career in Cleveland, but he rebounded nicely upon returning to the desert. He’s 38/44 on FGs and 39/41 on XPs as a Cardinal—very solid numbers. Keim would have to scramble to replace him, and anyone he brought in would be a big downgrade—good kickers aren’t there to be plucked up this time of year.

The best names available without legal baggage are probably veterans Stephen Gostkowski, who’s 36 and coming off injury, and Ryan Succop, who was last seen going 1/6 on FGs for the Titans last year. Maybe one of them would be able to regain their past form, but the more likely scenario would be the Redbirds going through several free agent kickers like we have seen several teams do in recent seasons. Not pretty.

Losing Gonzalez could have a larger impact than even losing a player like Sweezy or Murphy. When a kicker struggles, it can cost the team games and demoralize the whole locker room. Remember when Phil Dawson lost it? We don’t want to go through that again.

We made it through this exercise without losing any franchise cornerstones—Patrick Peterson, Budda Baker, Chandler Jones, DeAndre Hopkins, Larry Fitzgerald, or, heaven forbid, Kyler Murray. Bless the random numbers gods.

It may not be any of these players, but the Cardinals will probably get an opt-out or two. It might hurt the team on the field, but you can’t judge a player for doing what is best for their health and their family. Those things come before football.