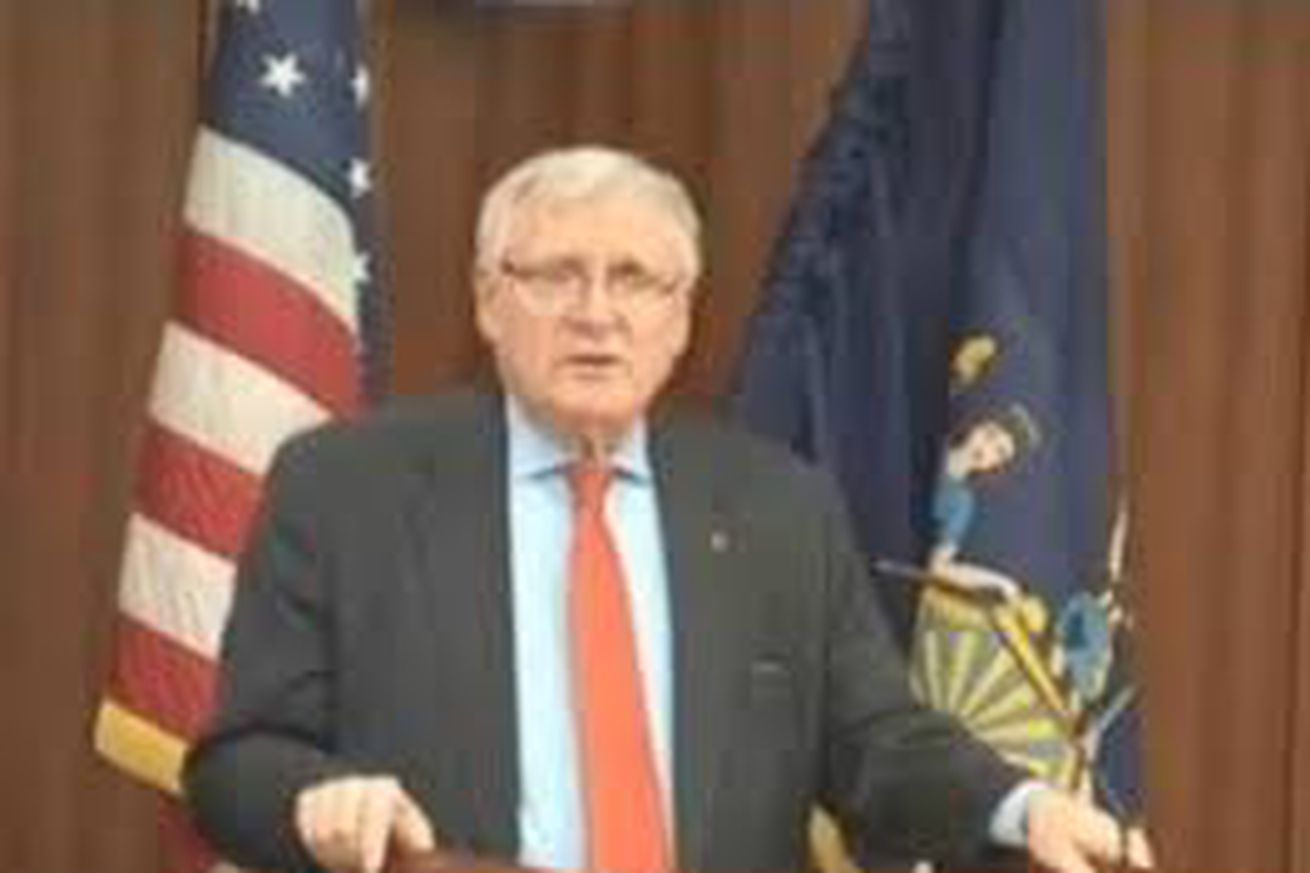 Michael Francis Armstrong (December 14, 1932 – October 17, 2019) was an American lawyer, based in New York City. Author of “They Wished They Were Honest,” the Knapp Commission’s investigation into NYC police corruption.

If you have been following my articles for a while now, then you know that my Uncle Michael is the reason why I, at 8 years old, became a Cardinals’ fan. On November 24, 1963 Uncle “Monkey” (as he liked me and my sisters to call him) took me to Yankee Stadium to see my first ever live NFL game: The New York Giants versus the St. Louis Cardinals.

During warmups I fell in love with Cardinals’ All-Pro FS Larry Wilson, so much so that I asked my Uncle Mike, a life-long Giants’ fan a season tickets holder, if he would be offended if I rooted for the Cardinals. My uncle was so gracious, he even seemed to embrace my happiness when the Cardinals won the game (thanks to the heroics of Larry Wilson and QB Charley Johnson) and on the way out of the stadium he bought me my first Cardinals’ pennant.

While sitting in traffic, Uncle Mike said that from now on he would do his best to invite me each year to the Cardinals game—-a promise he made good on for the rest of his life. Back then the Cardinals played the Giants home and away every year because they were NFL/NFC East rivals.

Riding in a car with Uncle Mike was always a special treat. There was something else he gave me other than my life-long love for the Cardinals and that is my life-long love for story-telling. Mike was by far the greatest story teller I have ever known. And boy how he loved to regale people. A Thanksgiving Day and Christmas Day tradition at his house in Scarsdale NY was Uncle Mike enchanting us with stories and engaging us in heated debates. Ever the lawyer, Uncle Mike could find a way to convince you that the sky is actually green, if you look at it from a certain angle. In my family, Uncle Mike was affectionately called “La Boca Grande.”

To give you an example of one of Mike’s stories, he loved to tell the one about the time he and my Aunt Joanie went with my mom and dad to racetrack on the hottest day of the summer in 1970—-it was so hot that the car broke down on the Yonkers Expressway—-and when they got to the track they proceeded to lose every race—-even losing the customary bet on the 4th horse in the 4th race that my grandmother Mary Healy Brennan always said was a lucky charm—-

Thus, with only $20 left in his pocket, while perusing the betting odds of the horses in the final race, he noticed that the 32-1 long shot was a horse called “Michael’s Shamrock”—-and Mike had to laugh when he saw that unlike the other horses who were trained in Kentucky, Michael’s Shamrock was trained in the Bronx. The other amusing news was that the highest the horse has ever finished in a race was 7th.

Of course, Uncle Mike put his last $20 on Michael’s Shamrock to win.

Much to Mike’s delight, Michael’s Shamrock and another horse were neck and neck coming around the last turn. It was so close that it was a photo finish. Then, many anxious seconds later, the photo was posted on the scoreboard—-the winner was Michael’s Shamrock, “by a nose!”

But this is where the story gets especially amusing.

Uncle Mike said that when he went to collect his 32-1 jackpot, he suddenly found himself in line with every drunken Irishman at the track! Except for one very sober Jewish man next to Mike at the back of the line who whispered to him, “it was a boat race.”

In other words—-it was fixed!

Now—-I don’t know how anyone can fix a photo finish—-but if they could—-it happened right there that day.

As it tuned out, the decade of the 70’s brought on a series of log shots and jackpots for Uncle Mike.

If you know the story of NYC undercover policeman Frank Serpico (played by Al Pacino) who refused to accept bribes and was appalled at the widespread corruption he witnessed in the police department—-Mike was the young lawyer whom Serpico consulted and told his story to—-which the undercover officer and Mike eventually brought to the the New York Times.

As you probably know, Serpico was set up by own men, while busting into a staged drug bust, he was shot in the face. Yet, Serpico somehow managed to survive and his courage spawned a city-wide investigation into police corruption (The Knapp Commission) to which Uncle Mike was appointed chief counsel.

One of the greatest honors of my life was having Uncle Mike come up to my high school in CT to speak about Frank Serpico and NYC police corruption at a full-school assembly.

As we know the 70s were very good to the Cardinals with Don “Air” Coryell as HC, Jim Hart at QB, Dan Dierdorf at LT, Conrad Dobler at LG, Jackie Smith at TE, Mel Gray at WR, Terry Metcalf at RB, Ron Yankowski at DE, Roger Wehrli at CB and Jim Bakken at PK.

Here are the highlights of their 1975 11-3 NFC East Championship season:

Go on a quick ride with me—-to the 8:33 mark of the Cardinals’ 26-14 win that Uncle Mike treated me to at the Meadowlands on October 5, 1975. The “lightning and thunder” RB tandem of Terry Metcalf and Jim Otis behind the Cardinals’ star-studded OL of Dan Dierdorf—-Conrad Dobler—-Tom Banks—-Bob Young—-Roger Finnie was unstoppable in this game.

By this time I was in college and thus was an eager participant in my uncle’s tailgates. The popular beverages were Bloody Mary’s and Miller High Life’s and the standard fare was side by side 3 foot long subs, one Italian, one roast beef.

But, it wasn’t the food and drink that made those tailgates unforgettable, It was the host of colleagues and friends whom Uncle Mike entertained at these gatherings. All of them were classic New Yorkers and men associated with the law—-there were state supreme court judges, district judges, lawyers of every kind (prosecutors and defense), district attorneys and a few choice police detectives.

One of those detectives was a man named Nick Cirullo. From the get-go, Nick Cirullo was as nice as he could be to me. Sure, he gave me some grief about being a Cardinals’ fan, but he always went out of his way to ask me about my studies at Boston College and he was always good for enthralling everyone there with a new story about busting up a liquor store holdup or doing a week long stakeout on a suspected serial rapist.

After the first time I met Detective Cirullo, on the ride home, Uncle Mike told me that Nick was only in his 2nd year as a beat patrol cop in Manhattan when the police chief called him in and said that if he could collar the leader of a drug ring they had been searching for, for well over a year, then the chief would give Nick his gold detective’s badge 8 years ahead of the typical 10 year time of service requirement.

Uncle Mike said that Nick had a suspect in mind and no sooner had Nick walked out of the precinct, he spotted the very suspect on an adjacent street corner. When the suspect saw officer Cirullo hustling toward him, the suspect bolted down an alley. After a wild chase, Nick pinned the suspect to the wall of a warehouse and immediately got a full confession out of him.

Imagine the look on the police chief’s face when a mere 20 minutes after telling Nick Cirullo he would be awarded a gold badge if he could find and arrest the leader of a drug ring, Cirullo was back on the scene presenting the leader of the drug ring in handcuffs directly to the chief!

During the tailgates with Uncle Mike and his friends, I always felt like I was in the presence of greatness. These were men who wore starched, button-down shirts, freshly pressed slacks, tweed blazers and London Fog overcoats to Giant games—-I always had the sense that they just wanted to be prepared to go anywhere in New York for whatever occasion presented itself—-and that tees and sweatshirts were for doing chores around the yard.

These were men of the law who were committed to upholding justice and the truth, despite the fact that all of them were receiving numerous death threats and occasional bribes or dubious quid pro quo requests. All of them were unique characters—-some of them amazingly Dickensian, like Judge John Sprizzo, who loved to tell the story about a moment during a “standing room only” debate at Fordham Law School between Uncle Mike and his nemesis, Alan Dershowitz, where Dershowitz accused Mike of “cozying up to judges.” And as if right on cue, Judge Sprizzo stood up at the debate and shouted, “Hey, I could only wish that Armstrong would have cozied up to me—-because I sure could have used a little cozying up!”

That little interjection brought down the house at Fordham.

And boy oh boy—-all of these New York judges, lawyers, DAs and detectives had such a masterful command of language—-all of them were story tellers extraordinaire. As a result, there was rarely a dry eye in the bunch, from all of the hearty laughing they brought out in each other. I have always called them, “The Only Living Boys in New York,” in honor of the Simon and Garfunkel song.

As much as I loved the tailgates, however, when the games started I was able to have the Cardinals and my beloved uncle all to myself.

Next episode: We move into the tumultuous 80s and 90s—-Mike squares off versus Alan Dershowitz in a civil case. Mike argues for the children of their mother, “Sunny” von Bulow, while Dershowitz argues in defense of their father Claus’ estate. Plus, Mike argues a case for Donald Trump—-and what transpires in the aftermath of the result.

Quote of the Day: “10% of the department is absolutely corrupt—-and 10% of the department is absolutely honest—-and the other 80%? They wished they were honest.” (Frank Serpico) Fast forward to the 1:35 mark to see Mike reference this quote and to see why Mike used it for the title of his book on the Knapp Commission, “They Wished They Were Honest.”