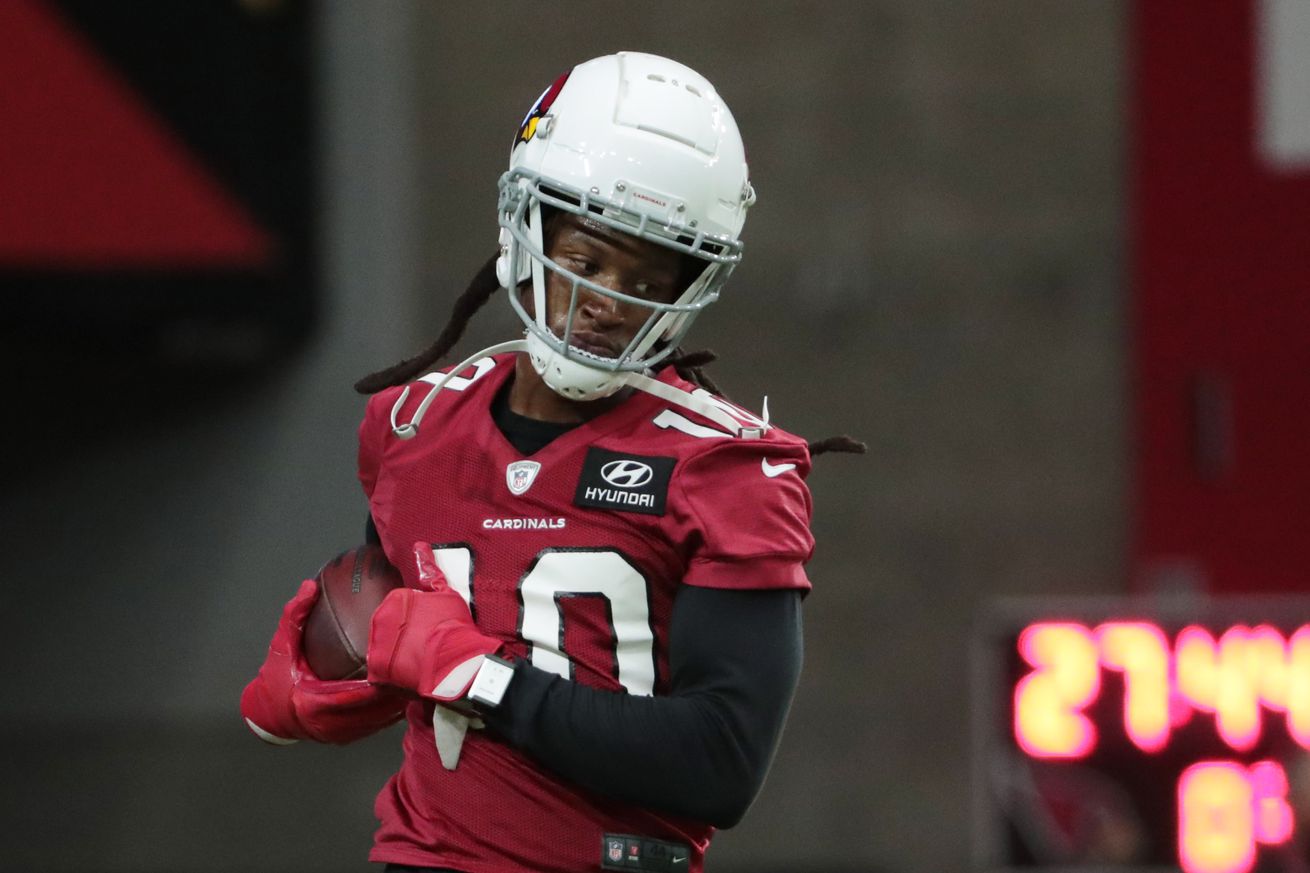 Yesterday, Sports Illustrated writer, Howard Balzer, wrote an article (posted below) in which he compared my asking whether Cardinals WR DeAndre Hopkins was holding out to “Is the earth flat?” and “will the coronavirus disappear?”.

Balzer said he felt compelled to write the article after Texans’ beat writer John McClain posted my article on twitter, which caught the attention of DeAndre Hopkins who quickly tweeted:

No Deandre Hopkins is not holding out. From the source. https://t.co/ok0mrlunP8

To be perfectly honest, never in my wildest dreams did I think my question would generate such interest on social media.

The question was meant for you guys. I wanted to know whether you might be wondering the same thing.

Am I thrilled that it did?

I am delighted that we got the answer from DeAndre Hopkins himself and that ROTB got a little national publicity.

On the other hand, it’s never pleasant to read tweets and messages akin to “you know Mitch everyone on twitter thinks you are a joke.”

For those of you who know me the best, I do not sit up nights trying to conjure up articles that people would term “click-baits.”

Those who don’t know me very well have accused me of “false reporting” and for manifesting a “lack of journalistic integrity”.

If you really want to know my modus operandi, like so many Cardinals’ fans, I just want to know the truth about the players, coaches and front office execs on my favorite team.

I am a fan who asks questions and offers opinions.

I am not a reporter.

I am a writer who loves to write about the Arizona Cardinals, even when it means bearing my soul and taking the risk of making a stand or, in this case, asking tough questions.

I am fully aware that vitriolic backlash from other fans and bloggers is a part of the package.

I don’t have the thickest of skins—-but I won’t let anyone silence me, as so many have tried to do over the years.

I can only speak my own truth.

The truth that spawned my question as to whether DeAndre Hopkins was holding out was that I am one of the few Cardinals’ fans I know who is not yet willing to place my entire trust in Hopkins.

I am on the verge—-but am not quite there yet.

Like the majority of you, I am in awe of his talent.

But, I find it very curious (yes, curious, Mr. Balzer) that so many NFL fans, writer and pundits appear to have complete trust in Hopkins to the point of completely vindicating him for slipping out from under the insidious clutches of a coach like Bill O’Brien.

As a former high school head coach and offensive coordinator, I have mixed emotions about Bill O’Brien. Having watched him f-bombing his way through an entire season of Hard Knocks, I had my doubts as to whether he could win with such an old school approach, particularly with regard to today’s athletes. But—-his teams do win.

On the other hand, I respect what O’Brien is building in Houston. Let’s not forget that O’Brien in his 6 years as the Texans’ head coach has won 4 AFC South division titles and last year after beating the Bills in the first round of the playoffs, the Texans had a 24-0 lead over the Chiefs at Arrowhead Stadium before a dormant Chiefs team roared back. O’Brien’s teams have won 9, 9, 10, 11, 11 games in his 5 winning seasons (including playoffs). He’s done a marvelous job developing QB Deshaun Watson, they often play tough, physical defense and it looks like the Texans are going to be a formidable team for years to come.

When it was reported that O’Brien insulted DeAndre Hopkins first by sitting him down and telling him that he hadn’t had such a difficult conversation with a player since the one he had in New England with Aaron Hernandez and secondly when he apparently criticized Hopkins for bringing his various “baby mamas” to the facility, I could see why DeAndre Hopkins would naturally feel estranged from his head coach.

On the other hand, I can understand O’Brien’s angst and frustration over the fact that DeAndre Hopkins believed he deserved to be able to miss practices on a regular basis and that once the $49M of his guaranteed money on his 5 year $81M contract was paid, after the first two years of the deal, he was asking for a new deal with the suggestions that he might hold out to get one.

In essence, DeAndre Hopkins was asking the Texans to create two double standards for him.

One of the easiest ways for a coach to lose control of his team is to allow for double standards in the way in which he treats his star players. Once a coach gives in to one, it can start a dominos effect.

Thus, a couple of days ago I woke up feeling very dubious about the fact that DeAndre Hopkins was already missing practices—-and I wondered, in light of his contract demands in Houston, whether he was making sure that he got his new contract before he would walk back out to another practice.

Was this a poor question?

Howard Balzer argues that I took Kliff Kingsbury’s statement (about Hopkins being the consummate pro in knowing how to get himself ready for week 1) out of context.

But, to be honest, Kingsbury’s response exacerbated another question that I have—-can Kliff Kingsbury stand up to his star players?

I appreciate that, unlike Bruce Arians, Kingsbury does not criticize his own players to the Arizona media. But, I am hoping that behind the scenes, he is not afraid of taking tough stands with his players, which is typically one of the most difficult challenges that a college coach turned NFL head coach faces.

There were times last season where I wondered just how well Kingsbury was doing in that regard—-especially with all the raving he did about Patrick Peterson, followed by the excuses he and Steve Keim made for Peterson when he was playing half speed.

Furthermore, from the get-go I think I was the only writer in Arizona who was openly critical of Terrell Suggs’ skipping of OTAs and regular skipping of practices during game weeks.

Again—-it’s a matter of double standards.

The tide shifted when the report came out from a Ravens’ teammate that Suggs told him he wouldn’t ever want “to steal from the Ravens,” so he was gong to “steal from the Cardinals instead.”

Man, I don’t know about you, but this still sticks in my craw something fierce.

What sticks in my craw even more than that—-is that after it was clear that Suggs was pulling a D.J. Swearinger and running half speed on the majority of plays—-no coach on the Cardinals sat him down. It took the coaches 4 weeks of watching Swearinger not give a sh&^ before they sent him away—-but with Suggs it took an excruciating 13 games before he was released—-and he was never benched. Go back to the Tampa Bay game and watch Suggs not even try to rush Jameis Winston in the 4th quarter when the Cardinals were clinging to the lead. It was one of the most disgusting efforts imaginable, especially from a player whom some believe belongs in the Hall of Fame. And this lack of effort from Suggs was seen week after week as the season progressed. Yet, again, he was allowed to miss most of the practices during the week.

So, yeah, as a long-time Cardinals’ fan fresh off a season where I saw numerous veterans “stealing” from the organization, I feel more than a little leery and cautious about new veterans on the team who want to cash in.

The thing is—-I don’t really know DeAndre Hopkins well enough to know whether it is wise to make him the highest paid WR of all-time.

Do Michael Biwill, Steve Keim and Kliff Kingsbury really know DeAndre Hopkins well enough to push their chips to the middle of table for him?

Kingsbury said himself that they’ve liked what they’ve seen in the “having been around him a little bit and how he prepares to get himself ready.”

I can tell you this—-if the condition is that Hopkins can take off as many practices as he wants—-then I think the Cardinals could be making a huge mistake.

Plus, can anyone trust that in two or three years, Hopkins could make a new contract demand—-again?

My belief is that the players you choose to sign to the highest salaries have to be among your best leaders—-like Chandler Jones and Larry Fitzgerald—-neither of whom expects to be treated to double standards, for they are two of our most energetic and exuberant players every day of the week, save for an occasional veteran’s day off. In fact, Jones and Fitz create even higher standards for their teammates.

There are tremendous positives that come with DeAndre Hopkins. His talent is special (4 time Pro Bowler, 3 time 1st team All Pro). He is on a Hall of Fame type career path. His personal story of how he has coped with unthinkable losses (his father and uncle) and how he has forged such an unbreakable bond with his mother who was blinded by a boiling mix of bleach and lye that was thrown in her face by a jealous mistress is inspirational—-and one of the very first things Hopkins did when he was traded to the Cardinals was to donate $150,00 to Arizona families affected by COVID-19. A couple of months later, he was an enthusiastic participant in Kyler Murray’s workout in Texas. Recently he has said that he expects he and Kyler to become “best friends.”

If ‘best friends” includes leading the team and practicing every day and not asking for a new contract the year when it’s time to show Kyler the money, then show Nuk the money.

Are you confident the Cardinals will get that kind of leadership from D-Hop?

Do you think you know him well enough to feel certain?

My old boss John Madden used to say, “Don’t worry about the horse being blind, just load the wagon.”

I sure hope that in this case, if the Cardinals do push their chips into the middle of the table to make Hopkins their highest paid player, then they are loading the strongest wagon in the NFC West.

Here are links to more questions that have been raised over the past day or so: