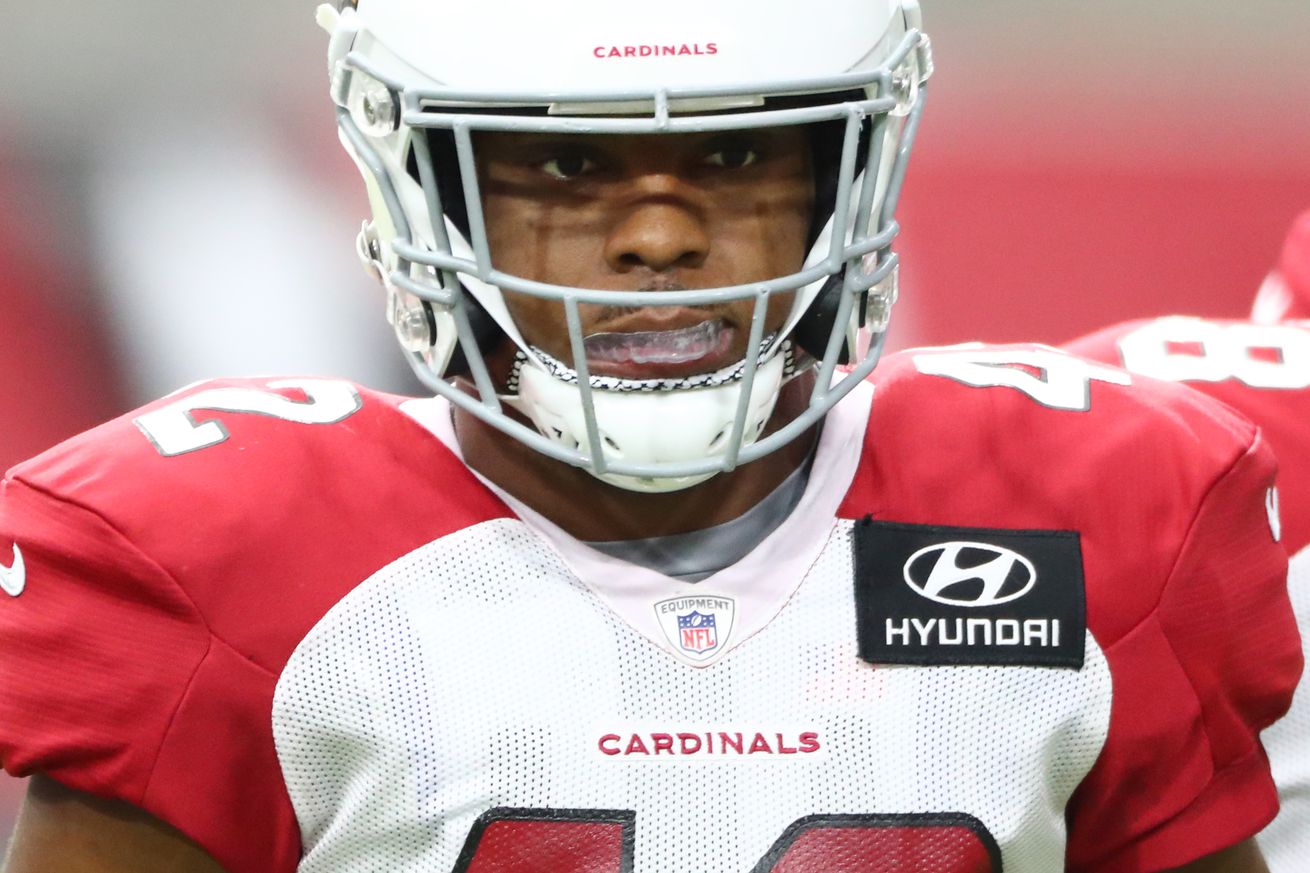 Here are the highlighted plays—-FF to 2nd quarter plays.

The key on this play is to watch how LB De’Vondre Campbell squared up in man coverage on TE George Kittle. He stays square until Kittle commits to taking an inside route and Campbell has tight coverage—-which causes JG to pirouette in the pocket, which was still clean, until DE Chandler slips the block of RT McGlinchey and makes the sack.

DT Jordan Phillips gets turned around on his block which leaves a wide open hole for McKinnon, who bounces his run to the left and CB Dre Kirkpatrick whiffs on the tackle, but S Chris Banjo and S Budda Baker make the key TD saving tackle at the 1 yard line.

Adjustment: DT Phillips needs to stay at home—-not sure what he was doing/thinking here—-and MIKE LB Jordan Hicks was too late reading the play, he should have been keyed in on McKinnon all the way especially with #60 G Daniel Brunskill already blocking downfield toward him. This is just such a disappointing effort by Hicks.

DT Jordan Phillips atones for his mistake on the previous play by getting outstanding, disruptive inside penetration to cave down the left side of the 49ers’ line, which allows Kennard and Campbell straight shots to tackle Mostert on the one inch line. Obviously, this is a huge stop and momentum swinger for the Cardinals’ defense.

Play 4: ARI 3rd Down and 6 from own 4 yard line, 6 yard stick pass from Murray to Hopkins

Isolating De’Andre Hopkins on the RCB gave the Cardinals a clear advantage all afternoon. Kyler takes advantage here, knowing that Hopkins will stick his route right at the marker. The blocking here is impressive as both tackles (Humphries and Beachum) neutralize the edge rushers and RB Kenyan Drake does a great job of coming up to block the inside blitz.

The Cardinals isolate Hopkins left again and run trips to the right. Fitz leverages the coverage on his crossing route and makes a good catch to move the sticks.

Here we get a good glimpse of Hopkins’ slippery RAC ability. Check out the superb blocks that Fitz and LG Justin Pugh make on this play.

Play 7: ARI 1st and 10, Murray behind center, I formation in backfield with TE as FB, 11 yard cutback run by Kenyan Drake

The run appeared to be an off-tackle run left with the FB/TE blocking the edge, but Drake makes a counter step for a run back to the right—-which might be by design (using the TE/FB as a decoy)—-or the FB/TE actually went the wrong way. Regardless, Drake makes good initial yardage and then finishes off the run by niftily cutting back through the middle. They key block that springs the play is RT Kelvin Beachum’s on his kick out block of LDE Dee Ford. Drake may have gotten more out of the run had WR Christian Kirk not whiffed on his block.

Look at the clean pocket Murray has here and the dime he throws in perfect timing to Hopkins. This play is near perfection.

Play 9: ARI 3rd and 5 from SF 34 yard line, incomplete pass under the sticks to Edmonds

This was the play that had K2 swearing on the sideline afterwards.

The Cardinals went empty backfield here and paired Edmonds in the slot with Hopkins wide to the left, with trips to right side. Credit the 49ers defense for doing a “zone switch” in coverage here as the CB closest to Edmonds stays home to take away Hopkins’ slant and the the boundary CB stays in a position to tackle Edmonds on the out pass well before the sticks. The zone look confused Kyler enough to where he threw errantly toward Edmonds.

Not sure why K2 wanted to take Hopkins out of isolation here, after it had been working so well. It would be surprising to see this formation again—-as it allowed the 49ers to zone Hopkins and Edmonds with 3 defenders—-unless, the play is a decoy designed to attack the “trips” side of the field where the Cardinals had the numbers advantage.

The ball was on the hashmark that Gonzalez prefers, but he pushed the ball right and doesn’t get a good follow-through. This kick was never on line.

It’s easy to second guess coaches, but going for the FG here very much surprised and frustrated me. The Cardinals had the momentum on their side and had such a good drive going. One of the main goals this year is to do a better job of finishing drives with TDs and not settling for FGs. I can assure you that Kyle Shanahan and the 49ers’ coaches were breathing a sigh of relief when the Cardinals elected to go for the long FG instead.

The 49ers motion Bourne into trips. The Cardinals are in man coverage. Bourne runs what at first looks to be an out pass and then plants his foot and slants back to the middle where he gains separation from Byron Murphy. Patrick Peterson is in position to make the tackle, but instead of going forward to make it, he goes backward. Kudos to Byron Murphy for chasing Bourne down from behind and to Budda Baker for lowering the hammer on Bourne to finish the tackle.

Adjustment: one of the keys to this play was not getting pressure on JG. It is a late developing route that would be difficult to complete if the QB is pressured. None of the Cardinals’ rushers beat their blocks on this one (Zach Allen for some reason is late getting off the ball) and on the pass, the LDT did not get his hands up (something DLC Brentson Buckner is likely going to stress this week).

The Cardinals appear to be in a Cover 2 zone here. LDE Haason Reddick gets a good push on his rush and is crowding JG who slightly rushes his thrown to a wide-open RB McKinney who is circling over the middle. Jordan Hicks was deep into his hook zone and was late to pick up McKinney, but almost makes the interception off of McKinney’s deflection and should have been in position to make the tackle, had McKinney caught the pass.

Superb time for Murray on this play who throws a strike to Arnold on a cutback post. Arnold tucks the ball away nicely and gains added yards. This is a clever play design by K2. The TE Arnold, in-line, is the widest receiver to his side. K2 sends the RB (Edmonds on an out route) to Arnold’s side which draws the defense up and then Arnold plants his foot and runs an in-route which was wide open.

K2 and K1 and Maxx Williams are going to be very frustrated to watch this play because Williams up the seam was WIDE open with nothing but smoky daylight behind him. The problem was that LB D. Greenlaw was standing in the passing lane and timed his jump perfectly to tip the pass, which was then snagged by Tartt.

I think K2 will keep this play on hand but make an adjustment: if there is a LB in the passing lane either throw the ball at his feet or lob the pass higher into the bucket if it’s as wide open as this one was. By the way, seam passes are some of the most difficult passes to complete. You wouldn’t think it, but the angle is difficult.

Outstanding effort by DeAndre Hopkins, Darrell Daniels and Maxx Williams (racing back all the way) to make the tackle.

The 49ers get a great block by WR T Taylor on Budda Baker was was coming hard to bust up the play. Good TD saving tackle by Chris Banjo from the deep safety position. However, again, you want to see CB Patrick Peterson use his supreme athleticism to make a n aggressive play here and yet he’s late to react and allows himself to get tied up in a block in which he makes little to no effort to shed. This is precisely why teams like to throw screens to Peterson’s side.

Watch Chandler Jones’ edge rush on McClinchey—-superb! Jordan Phillips also gets a good push up the middle. The pressure caused JG to buckle and throw off his back foot to Taylor underneath the chains who is tackled quickly by Dre Kirkpatrick. Such a huge play in this game. It forces the 49ers to kick the FG.

Very happy that Kyle Shanahan twice in the first half elected to kick FGs in 4th and 2 situations.

Excellent play call and execution—-sprung by excellent blocks from Humphries, Sweezy and Hopkins.

The throw was a little low but Hopkins got his velcro hands on it. The low throw might have been intentional in that situation—-to throw it where only Hopkins can catch it.

Play 20: 3rd and 10 (not shown)—-5 yard out pass to Hopkins, who hands ball to Fitz who sprints it to the hashmark in time to get team in position to spike the ball with 2 second left. Talk about a team being ready for this situation. This was outstanding situational preparation and execution. A play that requires everything to go perfectly.

Larry Fitzgerald just made SUCH a heads-up play. With the clock running out and no timeouts, Fitz sprints the ball to the middle of the field to ensure Kyler could kill the clock. Arizona drilled a FG on the next play. It’s the little things!

This kick was right on line from the start. “What sensational way to end the half.” (D. Hopkins)!

Your thoughts and observations?