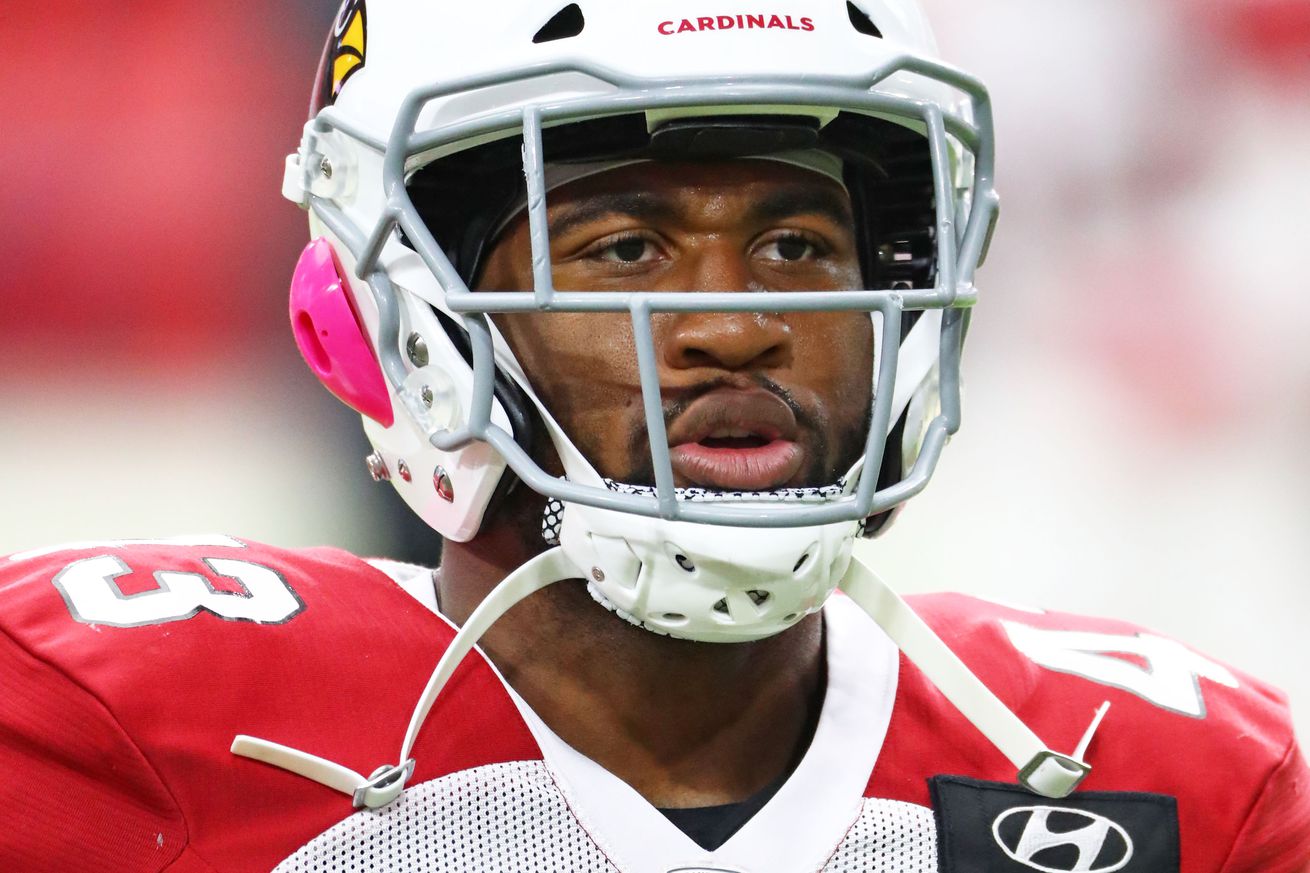 To follow along, FF to 6:48 of the video and you can watch each key 3rd quarter play with me:

The protection for Murray here is superb. Murray throws a dime right on time to Hopkins.

Key strategy: Chipping DE with RB Edmonds, holding a double team with D.J. Humphries for 1 Mississippi, then slipping out into the flat, which causes the 49ers’ LB to move up toward Edmonds, thus opening a clearer passing lane to Hopkins.

After years of begging and screaming for chipping from the Arians days, to see K2 employ these smart chips on DEs boosts confidence in the team’s play designs and execution.

Excellent play design with fake hand off left to Edmonds and an easy QB waggle right, which is wide open because Hyder initially gets caught moving inside on the run fake and should have been sealed off and finished by TE Maxx Williams, who inexplicably lets Hyder slip right off him to track Kyler down and bring him down by the shirt.

This is a play that K2 and K1 are going to anguish about because of the amount of time Murray had outside the pocket versus a loose 49ers’ zone defense and with DeAndre Hopkins open on the crossing route over the middle. The 49ers ILBers are caught in the mud, but the Cardinals do not capitalize and the sack is on Murray and Maxx Williams.

The Cardinals incurred their second penalty of the drive, having already overcome a 10 hard holding penalty on TE Darrell Daniels and this time on 3rd and 12, Kenyon Drake gets flagged for a false start.

Again, K2 has the RB (this time Drake) chip on DE Bosa, which delays his pass rush. Watch every one of the Cardinals’ OL on this play. It’s hard to believe that some fans are still saying the “OL sucked” and “Murray was running for his life out there.” The OL here—-every one of them is winning his block and giving Murray more than ample time—-but with decent coverage downfield Murray decides to slip through the wide gap that Bosa left on his rush arc and suddenly finds himself with room to run.

It then becomes 3 49ers’ defenders vs Murray with Drake near the sideline. Murray performs an outstanding pump fake which freezes the 3 defenders, then gives a little inside out move and slips his way up the sideline where Drake does a masterful job of turning his back so as to not get called on a crackback block penalty. Amazingly, Murray gets the first down and is able to scoot out of bounds untouched having just eluded 4 defenders.

This is a second time that the Cardinals on 3rd down situations went with trips left and isolated Christian Kirk to the right. For whatever reason, this time they elected not to chip Bosa, who gets a good jump off the ball. Murray never looks toward the trips side, and is keyed in on Kirk. Meanwhile, the 49ers blitz a S and a LB to Murray’s right side. Kenyan Drake recognizes the blitz but doesn’t get to the most immediate threat and the blitzer times his jump and bats Murray’s pass down. Kirk again has trouble shaking off the press and is pretty well covered.

Adjustment: the way Andy Isabella was shaking coverage in training camp, he is a more explosive option and deep threat in this type of an isolation than Kirk.

The other adjustment i would make is having one of the trips WRs run a crossing route over the middle so Murray has an easy #2 option. On this play the trips just run verticals.

Not shown: Justin Pugh’s tripping call (3rd penalty of the drive) and the missed 48 yard FG by Gonzalez on 4th and 10.

The 49ers’ OL is trying to sell a zone run block fake to the right. Zach Allen follows but keeps his head up to read play action and explodes off of George Kittle’s block to the ball to take JG down. Reddick was a spy on this play and was able to finish off the tackle. Credit good coverage.

This time, TE Maxx Williams sustains his block on DE Hyder, leaving Murray free to scramble up the right side. Murray does a nifty job of sliding. By now the 49ers’ defense is very frustrated.

Play 7: ARI 3rd and 7 from SF 48, incomplete miscommunication between K1 and Hopkins

This is play that K2, K1 and Hopkins will agonize over because they got everything they wanted—-they sent Fitz from the slot to chip on Bosa (Fitz missed the chip, but Bosa did not get a good jump while trying to avoid the chip) which gave a clear passing lane to Hopkins on an out pass, but Hopkins keeps running a go route with the defender in good position on him over the top, but not in a position to defend the out pass or a curl.

Adjustment: Hopkins is a pro’s pro at going opposite of where the CBs leverage is. On this play, with the CB leveraging him on the high side, for whatever the reason, he did not.

The Cardinals try to blitz Budda Baker from the right side, but he’s well blocked. Dre Kirkpatrick gets flagged for PI, but Bourne makes the catch over the middle to move the chains. Kirkpatrick had a solid day in coverage, and was in good position to defend this route, but got handsy. Good coverage on TE Kittle here by Haason Reddick.

Play 9: SF 3rd and 3 from the SF 48, incomplete pass to Coleman broken up by Reddick

The Cardinals are playing a 5 under zone here with a 3 man rush (not a fan, but it worked here), and played it perfectly. Jordan Hicks is sitting right on George Kittle’s crossing route which basically causes Kittle to stop his route. Coleman gets open to the right, but Reddick flies up from his zone to meet him and break up the pass short of the sticks.

This is the first play following QB Chris Streveler’s 3rd down and 1 conversion. It’s a good play action pass that got the 49ers defense caught flat-footed and Murray, with no one near him in the pocket delivers a dime to Hopkins over the middle. C Lamont Gaillard in for Mason Cole is getting the job done in the middle—-good, crisp accurate snaps and solid, well sustained blocks. This is the now the middle of what would be a go-ahead TD drive.