The Cardinals came out of the J.J. Watt sweepstakes a surprise winner. It took a two-year, $31MM deal, with $23MM guaranteed, for Watt to head to the desert. This was not the only offer the former Texans great received. 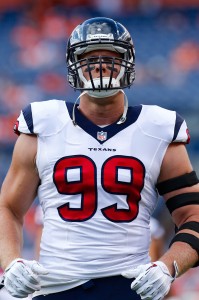 A report indicated the three-time Defensive Player of the Year turned down more money from the Browns and Colts. However, that may not be the case. Both 2020 playoff teams did not top the Cardinals’ offer, according to cleveland.com’s Mary Kay Cabot and The Athletic’s Stephen Holder (on Twitter).

The Browns were viewed as an early Watt finalist, and while the team may well have been in it until the end, Cabot notes Cleveland’s offer did not reach the $15MM-AAV place. The Browns’ proposal likely landed in the $12MM-per-year range, per Cabot. Under Chris Ballard, the Colts are known for their patience with free agency and trades — as was the case with the team’s Matthew Stafford talks — and Holder wonders if the team was even a high bidder for Watt.

Watt targeted a team with a sound quarterback situation. The Cardinals have that box checked in Kyler Murray, with Watt indicating Tuesday that his belief in the young dual-threat star helped lead him to Arizona (Twitter links via ESPN.com’s Josh Weinfuss). Cardinals DC Vance Joseph, who was with the Texans during Watt’s early years in Houston, is believed to have led the Cards’ recruitment effort, Albert Breer of SI.com notes. Watt confirmed Joseph was a key factor in his decision to head west.

Cleveland still intends on adding a major piece to team with Myles Garrett, while Indianapolis currently resides in the top five in cap space. The Browns and Colts, respectively, have Olivier Vernon and Justin Houston on track for free agency. The Colts have not ruled out re-signing Houston — whom they gave a two-year, $24MM contract in 2019 — but he will turn 32 this year.