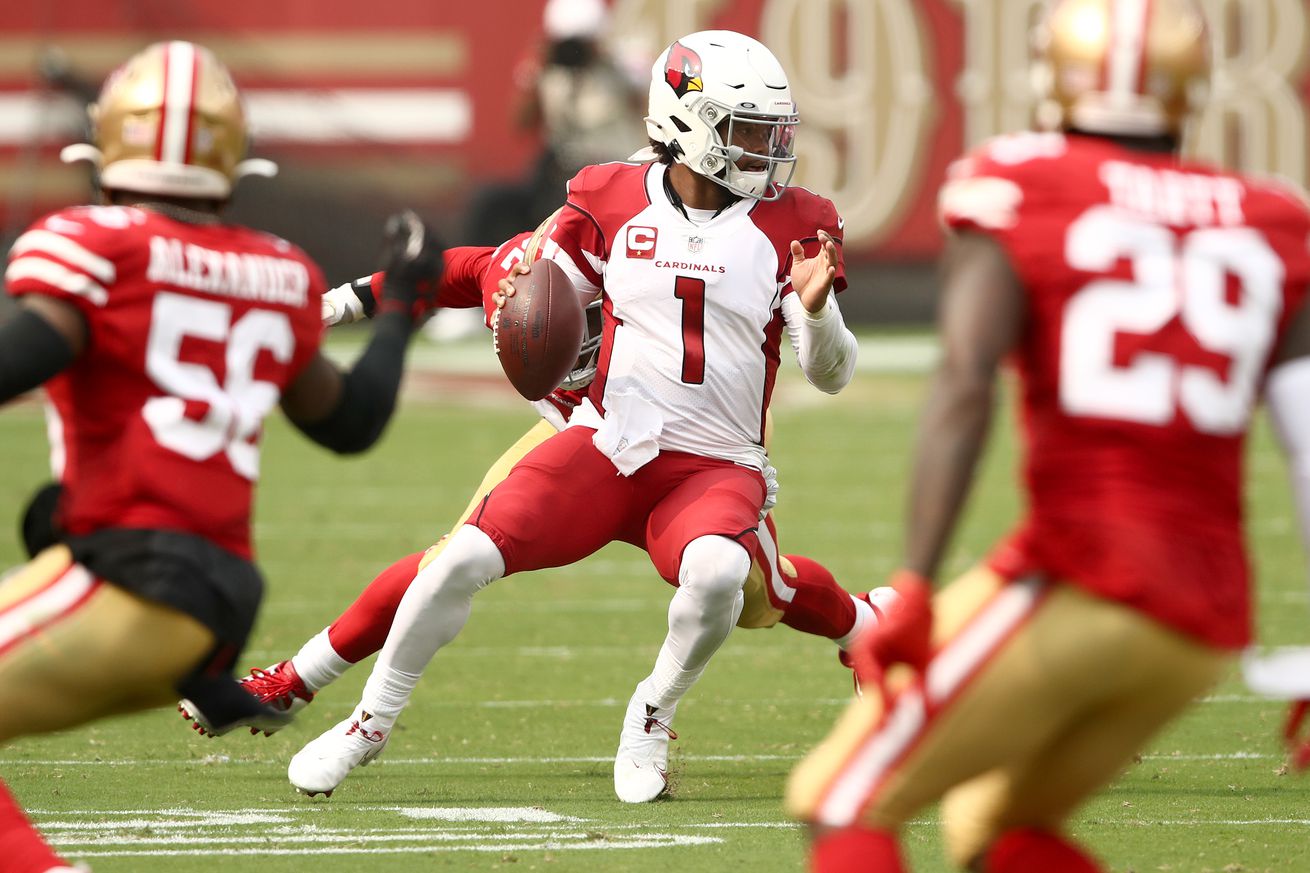 Kyler Murray was a weapon with his arm and his legs on Sunday. | Photo by Ezra Shaw/Getty Images

What a win! Let’s take a look at a few key stats from the upset in the Bay.

I don’t know about you, but I’m still giddy about our Week 1 win. After about as rough of a start as you can imagine, we toughed out a win as touchdown underdogs against the defending division champs. As just about everyone has already pointed out, the Cardinals are over .500 for the first time since 2015. What a start to the season.

It was a wild game, both on the field and on the stat sheet. Today, let’s take a look at some of the key stats and see what they can tell us about Sunday’s game—and the Redbirds moving forward.

That’s the number of 1st downs the Cardinals racked up against the Niners’ vaunted defense—12 through the air, 13 on the ground, 4 via penalty. It was an impressive offensive performance all around—24 points, 404 total yards, 31+ minutes of possession—but 29 1st downs is the most indicative of the Cardinals’ success. They were able to put together long drives against one of the league’s best defenses, with drives of 13, 11, 14, and 9 plays on the day (and two of those ended in missed FGs). That’s huge for a team that struggled to sustain possessions last season—36% on 3rd down, #21 in the league. They went 7/14 on 3rd down on Sunday. If Kyler and the boys can keep this up, it bodes well for the offense and should help keep the defense fresh later in games.

Those numbers are the QBR and passer rating of Kyler Murray and Jimmy Garoppolo, respectively. A few things to note here. One is that Kyler’s QBR was so much higher (to scale) than his passer rating. That makes sense—QBR includes rushing, while standard passer rating does not. Kyler’s QB was actually 5th-highest of the week, behind four MVP-caliber passers. Next, look at the gulf between Garoppolo’s ratings. His surface stats were solid—259 yards, 2 TDs, no INTs—but he also took 3 sacks for 16 yards and missed key throw after key throw throughout the game. Did he just have a bad game without a normal offseason and missing some key weapons, or is the Cardinals defense this improved? I more lean toward the former, but maybe it was a little bit of both. Finally, it was clear that Kyler was the better QB all day—which was borne out by QBR, but not passer rating. Sometimes, the advanced stats are the better stats.

Those are the rushing totals for both starting running backs—Kenyan Drake and Raheem Mostert, respectively. Now, both teams had good days running the football. The Redbirds racked up 180 yards on 36 carries (with 2 TDs), good for 5.0 YPC. The Niners went 25/123 (4.9 YPC, no TDs). So both teams were able to run the ball despite pedestrian days from their workhorses. (Although Mostert did obviously have the long receiving TD.) For the Redbirds, Kyler did most of the damage (13/91/1 TD), although Chase Edmonds chipped in 26 yards on 6 carries (plus a TD reception). The Niners got 67 on 10 carries by runners not named Mostert, which just shows the ingenuity of Kyle Shanahan. It looks like both of these highly efficient rushing attacks (both were top-10 in rushing DVOA last season) will continue to be so in 2020.

The big number for Arizona WRs on Sunday was obviously DeAndre Hopkins’s career-high 14 receptions. So what are these numbers? They’re the receptions, targets, and yards for non-Hopkins Cardinals WRs. Larry Fitzgerald went 4/5 for 34 yards, while Christian Kirk went 1/5 for 0 yards. KeeSean Johnson didn’t play, and snap counts aren’t available yet, but I don’t recall seeing Andy Isabella or Trent Sherfield out there on offense much. It’s just one game, but this has to be a big concern for Cardinals fans—we can’t expect Hopkins to ball out like this every week. We’re going to need complementary WRs to step up. You can always count on Fitz to carry his weight, but what about Kirk? There was a lot of offseason chatter (some of which came from me, admittedly), that Hopkins would “open things up” for Kirk. Yet he was basically a ghost on Sunday—a couple missed deep connections with Kyler and 13 yards on a PI call. Was he just working off the offseason rust? Let’s hope so—otherwise we’ll be saying “bust” not “rust” before too long.

Yep, those are the Redbirds’ penalties and yards on the day. The penalties were tied for most in the league and the yards were third-most. Yikes. There were a few questionable calls, yes—some borderline holding flags, some ticky-tacky fouls against DBs—but the Redbirds definitely shot themselves in the foot several times. It’s a testament to this team’s effort that they were able to overcome all the flags and get the win, but not every opponent is going to make as many mistakes as the 49ers did on Sunday. Blame it on the offseason? Nope—this was also an issue last season, as the Redbirds were in the top-10 in both penalties and yards last year as well. Blame it on the youth? Nope—despite a lot of dynamic young talents, the Cardinals are still the 9th-oldest team in the league. Whatever the cause, Kliff Kingsbury and his staff need to button this issue up before the schedule gets tougher later on in the season.

So there were a lot of interesting stats from Sunday’s game, but only one really matters: 1-0. It feels good to say that the Cardinals are 1-0 after four straight Week 1 losses. Next up is a matchup against fellow 1-0 Washington Football Team—which is a statement that would make almost no sense earlier in the offseason. (And not just because of Washington’s new team name.) I’ll be back later in the week with some thoughts on that matchup.