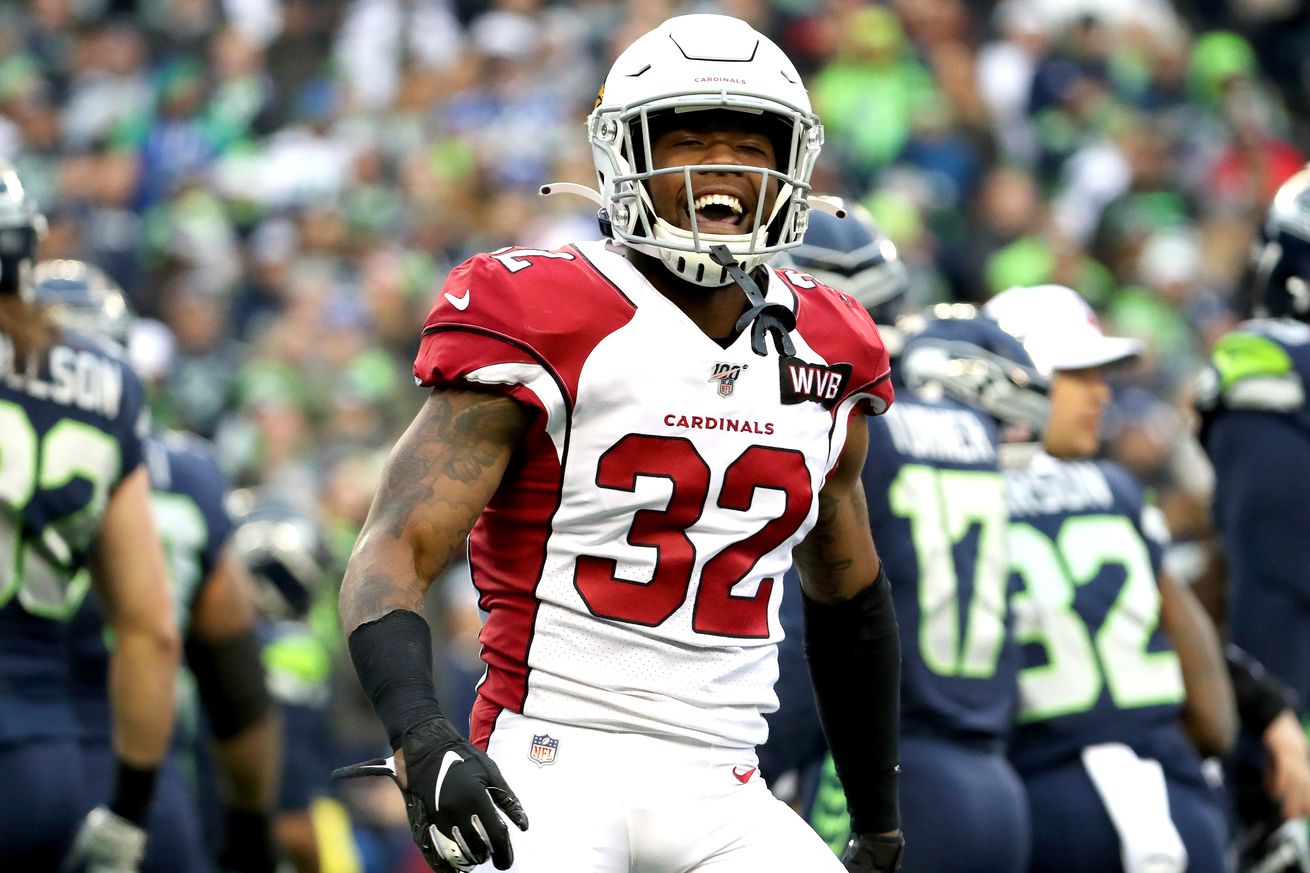 Background: SEATTLE, WASHINGTON – DECEMBER 22: Strong safety Budda Baker #32 of the Arizona Cardinals celebrates after a defensive stop against the Seattle Seahawks during the game at CenturyLink Field on December 22, 2019 in Seattle, Washington.

The Baltimore Ravens, under DC Don Martindale, boast one of the most innovative and aggressive 3-4 defenses in the NFL today. Steve Palazzolo of PFF does a superb job of highlighting the Ravens’ defensive creativity in this article—-which I am going to allude and draw from on several occasions:

At the very crux of their innovative philosophy is their penchant for disguising pass coverages and sending one or more of their defensive backs on QB blitzes. Check out the NFL’s 2019 blitz percentage stat (per PFF):

That fact that Vance Joseph’s 2019 defense with the Cardinals is 3rd on the blitz percentage list may not be pure coincidence.

One strategy that Martindale and Joseph employ somewhat similarly is how they utilize their free safety. Last year the Ravens’ top priority in free agency was to land veteran FS Earl Thomas.

What Martindale did with Thomas, who basically patrolled centerfield in the Seahawks’ Cover 3 zone based defense for almost a decade, was surprising—-Martindale moved Thomas up to the box 245 times and sent him on 57 blitzes (versus run and pass). Thomas wound up creating 13 QB pressures and 2 sacks. Curiously, he had one of his worst years tackling (55.1 run defense grade and 58.1 tackling grade, per PFF—-only registering 49 total tackles on the season).

Similarly, Vance Joseph moved Budda Baker up to the box to make a greater impact in stopping the run (150 combined tackles, 120 solo in 2019—-81.3 run defense grade and an outstanding 82.9 tackling grade) and to blitz the QB on occasion. Baker dailed up 12 QB pressures and 1 sack.

Because the Cardinals were so poor at covering TEs, Baker was forced to try to do his part in that regard—-but obviously Baker lacks the ideal length to cover big TEs. He wound up giving up 36 catches on 47 targets (76.6%—-64.8 coverage grade) for 400 yards, 2 TDs, 0 ints., 6 pass breakups and 1 penalty. To be fair, Baker wasn’t able to profit from having an experienced secondary beside him.

Cornerback “Cat” blitzes have been in vogue for some time—-but the Ravens employ them as much or more than any other team. Their CBs disguise and time their blitzes very well, and the back end of the defense is very quick at picking up the vacated WRs.

This is a double cat call, where both the outside CBs come hard on the edge after Jared Goff, while the double high safeties pick up the WRs. The Rams’ RB picks up the CB rushing from the top of the screen, but RCB #22 Jimmy Smith gets a clean shot at Goff at the top of the arc and takes him down for the sack.

Now, if you recall, Vance Joseph sent Patrick Peterson after QB Daniel Jones in Peterson’s first game back last season and Peterson got the sack. But, the Cardinals’ secondary was too inexperienced and a couple steps slow at picking up coverage for Joseph to run cat blitzes on a more regular basis. Expect that to change this season.

On paper, take a look at how the Cardinals’ defense stacks up personnel-wise with the Ravens’:

The Cardinals’ Defense’s Great Challenge in 2020:

With the CB trio of Patrick Peterson, Robert Alford and Byron Murphy, the safety trio of Budda Baker, Jalen Thompson and Deionte Thompson, plus the addition of all-purpose cover LB/S Isaiah Simmons—-if the Cardinals can turn their pass coverage into a strength the way the Ravens have—-NFL football in Arizona could get very hot, very quickly.