The Cardinals converted $2.6MM of outside linebacker Devon Kennard‘s base salary into a bonus, according to Field Yates of ESPN.com (Twitter link). The move will carve out an additional $1.725MM in cap space for Arizona this year while kicking an equal amount on to their 2022 books. 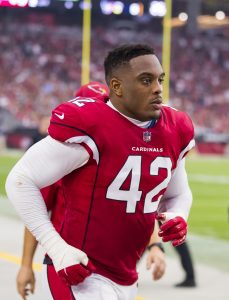 Before the adjustment, the Cardinals had just ~$700K in cap room, according to Over The Cap. Now, they have a little extra space to make depth signings in the second half of the year.

The Lions cut Kennard in March of 2020, a surprise move given his 14 sacks across 2018 and 2019. The Cardinals gladly picked him up, signing him to a three-year, $20MM deal with $12MM in guarantees. He recorded just three sacks in 2020 and has yet to notch a sack this year, but Pro Football Focus has him ranked as one of the league’s best edge defenders, tied for 12th with Vikings standout Danielle Hunter.

The Cardinals fell to 8-2 on the year after Sunday’s loss to the Panthers, but they’re still atop the NFC West and tied for the NFC’s best record with the Packers. They’ll look to get back in the win column on Sunday when they face the Seahawks in Seattle.