Veteran receiver Willie Snead is auditioning for the second time this week. He is visiting the Cardinals for a workout, reports Pro Football Network’s Aaron Wilson. 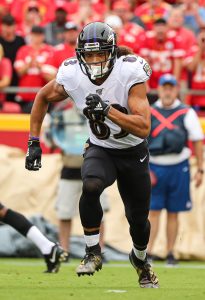 Wilson adds that Antoine Wesley injured himself in practice, and is likely to be sidelined for one to two weeks. That would (temporarily) add another opening for a wideout in Arizona, a team whose receiving corps has seen some significant changes this offseason. The Cardinals will be without DeAndre Hopkins for the first six games of the season, putting added pressure on trade acquisition Marquise Brown to operate as the team’s top wideout in his absence.

Snead, 29, is coming off of the worst statistical season of his career. Splitting time between the Raiders and Panthers, he managed just four total receptions. Before that, he had three-year stints in New Orleans and Baltimore, in which he established himself as a dependable slot receiver. A deal with the Cardinals would put him in competition for inside snaps and targets with 2021 second-rounder Rondale Moore, and, to an extent, tight ends Zach Ertz and Trey McBride.

Snead was one of two receivers who worked out with the Texans on Tuesday. That led to a deal for Chester Rogers, but left Snead on the lookout for a new home. In Arizona, he would join a crowded pass-catching corps, which would hinder his ability to reach his stated goal of reclaiming a starting role at his next destination. With a limited number of suitors remaining on the veteran market, though, Arizona’s offense could nevertheless represent a suitable location for him to rebuild his value.