A Cardinals waiver claim last year, Jonathan Bullard agreed to remain with the team after a short stay in free agency. The Cardinals announced they re-signed the defensive lineman on a one-year deal. 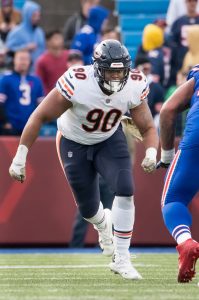 Bullard started six games for the Cards last season, registering 22 tackles (four for loss) and 1.5 sacks. He ended the season on IR due to a hamstring injury.

The Bears cut the former third-round pick before the 2019 regular season began; the Florida product worked as a rotational player in Chicago before ascending into Arizona’s starting lineup.

The Cardinals lost Rodney Gunter to the Jaguars in free agency but signed former Bills defensive tackle Jordan Phillips. But be it in a starting or rotational role, Bullard is set to be back as a contributor for the Cardinals up front in his fifth NFL season.