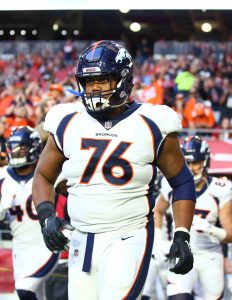 Garcia has seen his responsibilities gradually reduced as his career has gone along, but the five-year veteran has logged 41 starts and profiles as one of the NFL’s most experienced second-string offensive linemen entering the 2020 season.

The Broncos used Garcia as a rotational guard during their 2015 Super Bowl season and as a 16-game starter in 2016 and ’17, but by 2018, the former fourth-round pick started just four games and saw an injury end his contract-year campaign. He signed with the Cardinals for one year and $2MM last March. This pact will likely be for a similar amount, seeing as Garcia played in seven games and started none in his Arizona debut. The Cards, however, employ injury-prone starting guards in Justin Pugh and J.R. Sweezy, so it makes sense to have an experienced backup.

This will also be Washington’s second Cardinals season. The former UDFA spent two years with the Lions before signing with the Cards in 2019. He did not see any defensive snaps but played on 45% of Arizona’s special teams plays.