The Cardinals are signing quarterback Cole McDonald (Twitter link via NFL.com’s Ian Rapoport). McDonald will provide offseason depth for Arizona as he begins his push to make the fall cut. 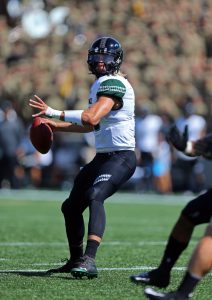 The former University of Hawaii standout has yet to see live action in the NFL. The Titans snagged him in the seventh-round of last year’s draft, but dropped him in August to make room for Trevor Siemian. While with the Rainbow Warriors, McDonald finished third in the nation in passing yards. Most evaluators chalked that up to Hawaii’s highly-aggressive offense, but McDonald is out to prove that he deserves a good chunk of that credit.

There’s a path for McDonald to stick on the depth chart. Backup Chris Streveler stumbled in the season finale as he filled in for Kyler Murray. Meanwhile, Brett Hundley is out-of-contract. The Cardinals didn’t sign McDonald immediately after his December audition, but it seems that he made a strong enough impression on Kliff Kingsbury & Co.