The J.J. Watt sweepstakes are over. The heavily decorated pass-rusher has chosen his next team, and that’ll be the Cardinals, Watt announced himself on Twitter. 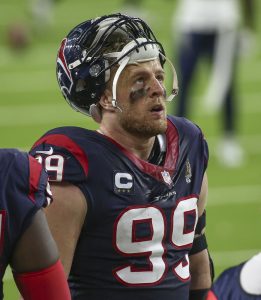 This was no cheap signing for a veteran player chasing a ring, Watt got paid. He’s getting a two-year deal worth a whopping $31MM with $23MM of that guaranteed, a source told Ian Rapoport of NFL Network (Twitter link). Watt made it known from the outset that he only wanted to go to a place where he could win a Super Bowl, and clearly he’s excited about what Kliff Kingsbury and Kyler Murray have cooking.

We heard last week that Watt had received an offer in the $15-16MM range, and that turned out to be spot on. He was also connected to playoff teams like the Browns, Titans, Packers, Steelers, and a couple of others. Watt will now rejoin former Texans teammate Deandre Hopkins, who recruited him on social media, in the desert.

Hopkins won’t be the only familiar face for him, as Cardinals defensive coordinator Vance Joseph was on staff in Houston for Watt’s first three pro seasons. It’s a coup for Joseph, who will now have an intimidating pass-rushing duo with Watt lining up opposite fellow All-Pro Chandler Jones.

As Josh Weinfuss of ESPN tweeted, Jones is first in the NFL in sacks since 2012, and Watt is second. They’ll be a problem for any offensive line. The three-time NFL Defensive Player of the Year had struggled with injuries for a few seasons, but he played all 16 games in 2020.

He only registered five sacks but was a constant disruptor, and had 14 tackles for loss and seven passes defended. He still graded out very well in most pass-rush pressure metrics.

Watt is the first massive domino to fall with the start of free agency right around the corner. This signing could mean the Cards are planning to move on from impending free agent Haason Reddick, who just registered 12.5 sacks in a breakout 2020 campaign. Arizona will host Houston in 2021, so Watt will have a chance at revenge on his old team. The question now becomes whether he’ll be chasing Deshaun Watson or not when that game happens.