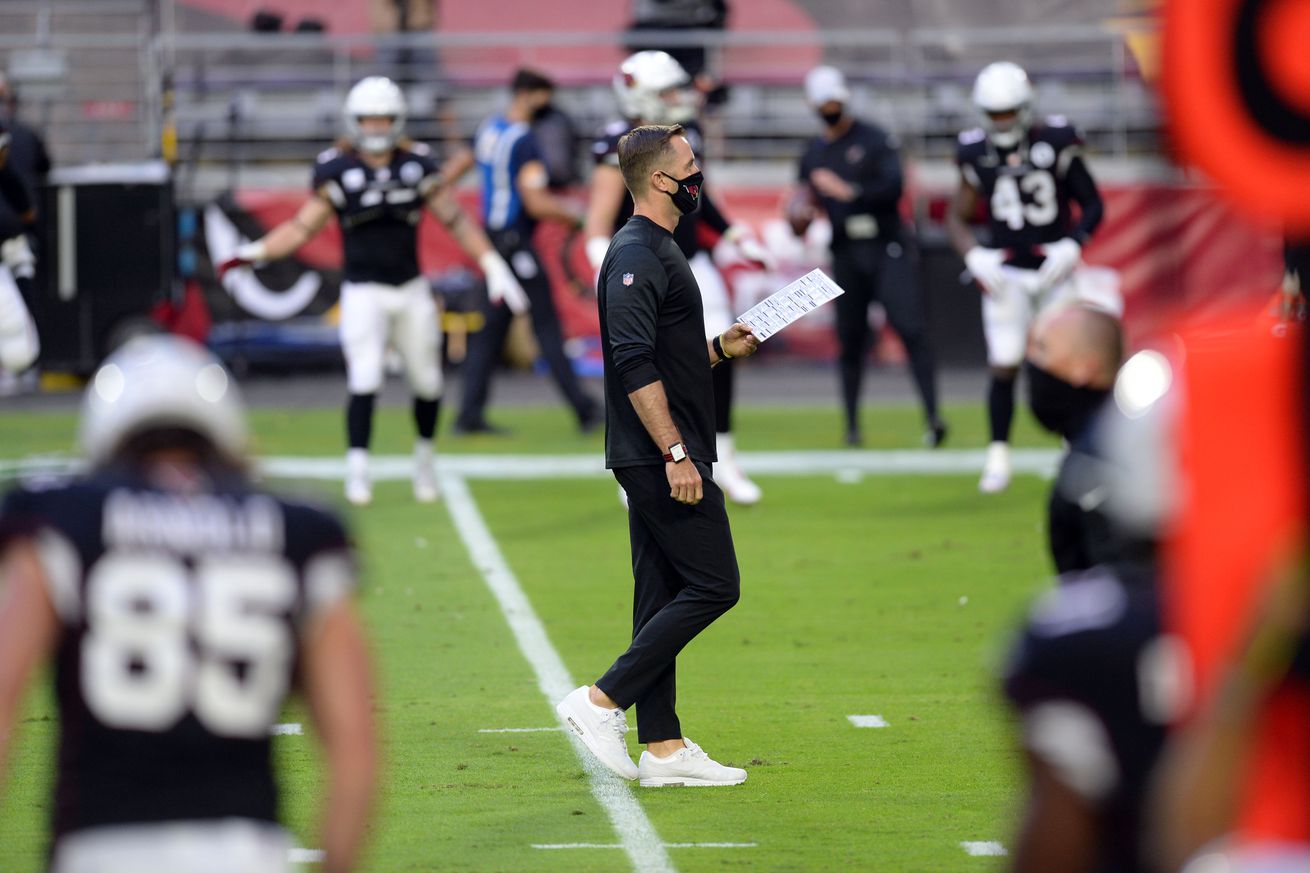 Kliff Kingsbury wilted under the spotlight on Sunday night. The Cardinals cannot afford for this to keep happening. | Joe Camporeale-USA TODAY Sports

Kliff Kingsbury came to the Cardinals with a reputation as an innovative hotshot coaching prospect. But he’s been more conservative that you’d think since arriving in the desert—and it almost cost the Cardinals a win on Sunday night.

What a rollercoaster of a game.

From what looked like a sure loss to a spirited comeback to seemingly watching a miracle win slip away only to be saved in one of the craziest endings to a football game imaginable… this game really had it all.

I’d love nothing more than to just celebrate this win right now. But there almost wasn’t a win to celebrate because a series of costly mistakes by Kliff Kingsbury made this game so much harder for the Cardinals than it needed to be.

Simply put, Kliff coached afraid (I would also call it something that rhymes with “kickin’ it”) for most of the game on Sunday night—as he has throughout his brief Cardinals career. It has cost the team in the past, and it probably should have cost the Cardinals this monumental win. Kliff has obviously got something special going with Kyler Murray and the offense, but he just can’t seem to get out of his own way sometimes with a bizarre streak of conservativism that could prevent the Redbirds from becoming true contenders if he doesn’t fix it.

I know hindsight is 20/20 and it’s easy to play armchair coach, but, today, let’s take a look at a few critical moments from Sunday’s game that were seemingly too big for Kliff and see what went wrong. We’ll start with the very first offensive series of the game.

The series started promising enough with a nice play design that got TE Darrell Daniels wide open up the right sideline. Unfortunately, he dropped what would have been a 1st down reception, and a false start on the next play made it 2nd and 15. The subsequent playcall wasn’t conservative per se, but Kyler went away from his intermediate looks and settled for a pass to Christian Kirk in the flat that went for no gain.

The 3rd down playcall was truly perplexing: a WR screen to DeAndre Hopkins that the Seahawks saw coming from a mile away. And remember this series came on the heels of as easy a touchdown drive as the Cardinals had given up all season. Three-and-out shouldn’t be an option, but Kliff was seemingly content to give the ball right back to Seattle after things didn’t go our way on 1st and 2nd down instead of giving his playmakers a chance or even getting bailed out by a flag. This was a minor, minor note in the context of the game and how it ended, but it was the start of a trend this game and worth pointing out.

Let me start off by saying that I absolutely agree with the decision to go for it on 4th and goal in this situation. Budda had just made a game-changing play and you had the chance to take a shocking lead. You have to take that chance, especially knowing you’re likely going to need 30+ to win against Russell Wilson. But Kliff really botched this possession from a playcalling standpoint, bringing back ugly memories of last season’s goal line struggles.

The first playcall worked well enough—an inside handoff to Drake out of a jumbo pistol set that gained 5 yards down to the 3. But instead of giving his best playmaker—Kyler—a chance to do something on the next play, he went right back to Drake with a run out of a 3WR set that never had a chance. Everyone in the building knew the next play had to be a Kyler run, and the Seahawks defense snuffed it out easily. I don’t know what we were trying to do on 4th down, but a Seahawks blitz ruined the play from the start. The play you call there *has* to be one of your best plays, and it clearly wasn’t if a blitz ruined it that easily.

To come away from that possession with 0 points was just crushing—especially since it took Seattle just 6 plays to score a touchdown on the subsequent drive. This wouldn’t be the last time that overly conservative playcalling would nearly burn this team.

Situation #3: Late runs (and short passes) when down 10 late in the 4th quarter.

The Seahawks had just gone up 10 on a ludicrous Wilson to Tyler Lockett TD on 4th-and-goal (more on that later). The Cardinals knew they needed to score, get the ball back from Wilson, and score again in the final 6:44 to get to overtime at the very least. So what does Kingsbury dial up on the subsequent drive? Six called runs in the next 9 plays, the rest mostly being a smattering of short passes. (The second play of the drive was a play fake that could have been a shot but wound up in a nifty Kyler run for a 1st down.)

Where was the urgency? We still needed another possession! Like most of you, I was yelling “Stop #*%$ing running!” at my TV throughout this drive. We didn’t show any urgency until *after* the Benson Mayowa penalty on the FG attempt that gave us a 1st down. It’s almost like Kliff didn’t think we were going to win and was just trying to make the final score close. Truly perplexing playcalling for most of this drive. But the most perplexing decision of all was yet to come.

This sequence is burned into the memory of every Cardinals fan forevermore. I’ll never be able to comprehend Kliff’s decision-making here. Just unfathomably bad. “Debacle” doesn’t even do it justice—it’s one of the worst coaching decisions I’ve seen in any sport, at any level, in my life. The defense had just done its job and gotten the ball back from Wilson, and Kyler and Chase Edmonds had gotten us down to the 18 yard line. Okay, you figure run a few more plays to either get into chip shot range or score a TD. Instead…

Kliff tries to set up for a FG on SECOND DOWN. One Darrell Daniels blown blocking assignment later (not his night) and we’re now on the 23 yard line. Certainly not in chip shot range. You HAVE to run at least one more play to get some yardage back, right?

Kliff sends on the FG unit, then madness ensues. The play clock is winding down, but the ball is snapped and the kick goes through the uprights for what seems to be a win… only Kliff had called a timeout in panic, a stunning lack of situational awareness. The Cardinals are forced to do it all again, and Zane Gonzalez misses the attempt that counts (you can’t blame him at all). Wilson gets the ball back to eviscerate the emotions of Cardinals fans everywhere. It took an absolutely miraculous series of events (Vance Johnson turning into Todd Bowles, Isaiah freaking Simmons coming up with the INT, Kyler and Chase going god mode), and Gonzalez redeeming himself) for the Redbirds to come away with an unthinkable victory.

But more than that, they bailed out their head coach. Unlike Pete Carroll, who trusted Russell Wilson and Trent Lockett to win the game on that 4th and goal play, Kliff took the ball out of his best player’s hands and choked loudly and wetly on national television. Good on him for owning up to it after the fact, but the Cardinals’ entire season could have unraveled if we had lost the game because of that decision. We’d have been heading into a bye week—with nothing to do but stew—after losing a critical division game at home because of a coach who either didn’t trust his players or was too in over his head to make the right call.

And here’s the thing: That last part is still true, which damn near would have been a fireable offense had we lost. Walter is willing to chalk it up to growing pains, but Kliff has 6 seasons of head coaching experience at a major university and nearly a season and a half in the NFL. The time for “growing pains” is over. Kliff HAS to be better than he was in Sunday’s game if this team is ever going to become an actual contender. He’s got the offense clicking—and it seemingly hasn’t even reaching its ceiling yet—but the way I see it now, he’s a liability in clutch situations, a glorified offensive coordinator out of his depth as a head coach when games are on the line.

I wondered from Kliff’s very first game last season whether this conservative streak of his is there because some part of him thinks that he needs to coach like a traditional NFL head man. He’s lumped in with other young offensive-minded hotshot coaches—think his NFC West counterparts Sean McVay and Kyle Shanahan—but Kliff has yet to truly show he can be as innovative and as bold as those guys. Hell, Kliff looked like Steve Wilks compared to Pete Carroll—the oldest coach in the league and a fellow former college coach—on Sunday.

And until Kliff either learns to trust his players implicitly or shows he can rise to the occasion when things get tough like those guys, the Cardinals won’t experience the same level of success as their division rivals with him at the helm.

The Cardinals didn’t win that instant classic game because of Kliff; they won it in spite of him. If this team has Super Bowl aspirations in the next few years, that can’t keep happening. If it does, the Air Raid might be taking off with another captain at the helm someday sooner than anyone realizes.

For now, yeah, I’m celebrating the win. But I’m also acutely aware of how it almost didn’t happen.