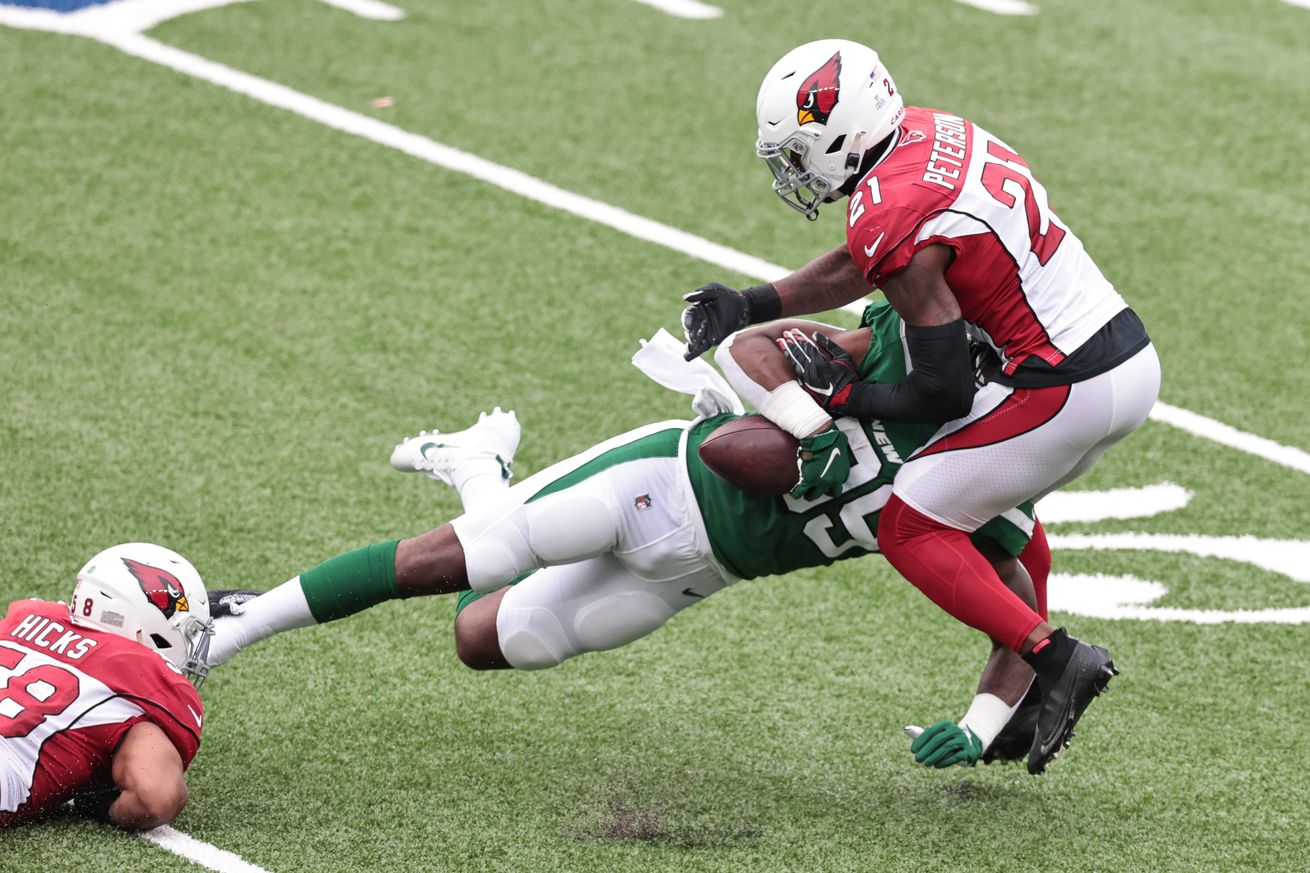 There was a lot of hype surrounding the Arizona Cardinals during the offseason with the expectation that they were going to be one of the most improved teams in the NFL. Despite the solid 3-2 record, they have fallen short of the high expectations set upon them so far.

General Manager Steve Keim has invested a lot of the Cardinals’ salary cap on free agents as well as their own draft picks that have not been playing at a very high level this season.

Taking a look at the first five weeks for the Cardinals, they should be 5-0. Kyler Murray’s turnovers packaged with a weak run game and inconsistencies on the defense put the team in a rough spot in their two-game losing streak before snapping it in the 30-10 win against the Jets this past Sunday.

If their star players can start playing like stars, this team would be in a better situation now. With that said, here is my list of the four expensive players that need to step up their game.

The Cardinals applied the transition tag ($8.483m) on Drake with the expectation that he was going to pickup where he left off last season as a productive workhorse in the offense. Despite getting the workload (85 carries), the burst that we saw from him last year seems to be a thing of the past. With his contract fully guaranteed, any possibility of a trade seems unlikely.

Drake has been a non-factor as a receiver (22 yards) and is averaging only 3.7 yards per carry compared to his 5.2 YPC average through eight games with the Cardinals last year. Though some of the blame can go on Kliff Kingsbury’s play calling and the run blocking by the offensive line, the five-year veteran has been hurting himself running east and west instead of just running up the field. If his play does not improve, the hot-hand in Chase Edmonds could surpass him on the depth chart soon.

Hicks was the Cardinals’ top free agent addition last season after he signed a four-year $36 million contract with the team. After a season where he set a career-high in tackles (140) and had three interceptions, he has significantly regressed this year.

According to Pro Football Focus, he has been a major liability in tackling (59.6), run defense (53.7), and pass coverage (51.7). Whether he got beat with power up the middle or trailing players with speed, Hicks has been one of the biggest weaknesses on this defense so far. He already has six missed tackles on the season and was penalized for pass interference in Week 1 that nullified a Chris Banjo interception.

As a pass rusher, Jordan Phillips has been solid in that department. So far this season, he has recorded two sacks but has generated only four pressures. His 29.0 run defense grade is the worst among 118-eligible interior defenders by Pro Football Focus. The Cardinals run defense as a whole has been very inconsistent and leaky.

We have seen Le’Veon Bell, Mike Davis, Antonio Gibson, Adrian Peterson, and many other running backs gash the Cardinals for big chunks of yardage. In order for the Cardinals to have more success on the defense, they have to be able shutdown the run game and it starts with their highest-paid player on the defensive line. The Cardinals are paying Phillips handsomely with three-year $30 million contract awarded to him this past offseason and it is about time that he plays up to that level especially with Chandler Jones out for the season.

Rug routes, drag routes, crossing routes, and slant routes. Basically receivers that are running quick routes east and west have been too difficult to cover for the former All-Pro cornerback. Entering the final year of his five-year extension signed in 2014, he has allowed 15 receptions on 27 targets for 239 passing yards and a touchdown so far this season. Teams have been successfully exploiting his weakness, especially the Panthers that had a 75 percent completion percentage when throwing his way. He has been criticized for his tackling, doing shoulder bumps and push offs instead of wrapping up a defender with a textbook tackle.

He has only one interception and one pass breakup through five weeks. Though he remains decent as a press man cornerback, his cap hit of $13.1 million this season seems to be too much for underwhelming play.

I have no complaints about future Hall of Famer Larry Fitzgerald but with the way the Cardinals are using/not using him. Steve Keim used $11 million in cap space to bring him back but the 37-year-old has only 18 receptions on 25 targets for 123 receiving yards while playing in 83 percent of their offensive snaps. Fitzgerald will go down as the greatest Cardinal of all time and one of the greatest receivers in NFL history but does not seem to be an important part of the offense anymore with DeAndre Hopkins in town.

The Cardinals are not getting quality production from their top draft picks. 2019 second-round pick Byron Murphy has allowed a 94.8 passer rating on 14 receptions. The second of their 2019 second-round picks is Andy Isabella, who has seen only 28 percent of snaps on offense. Vance Joseph refuses to unleash No. 8 overall pick Isaiah Simmons.

Overall, the Cardinals need their highly-paid players to start playing like stars. Their draft picks over the last two drafts need to either play better or receive more snaps to grow on the team. With more challenging teams on the schedule such as the Rams and the Seahawks twice along with teams like the Bills and Patriots, the Cardinals can not afford to have mediocre production from the players that they have invested greatly in.

The easy part of their schedule has come and gone. The biggest tests for them are up ahead and it starts with a high-powered Cowboys offense on Monday Night Football.