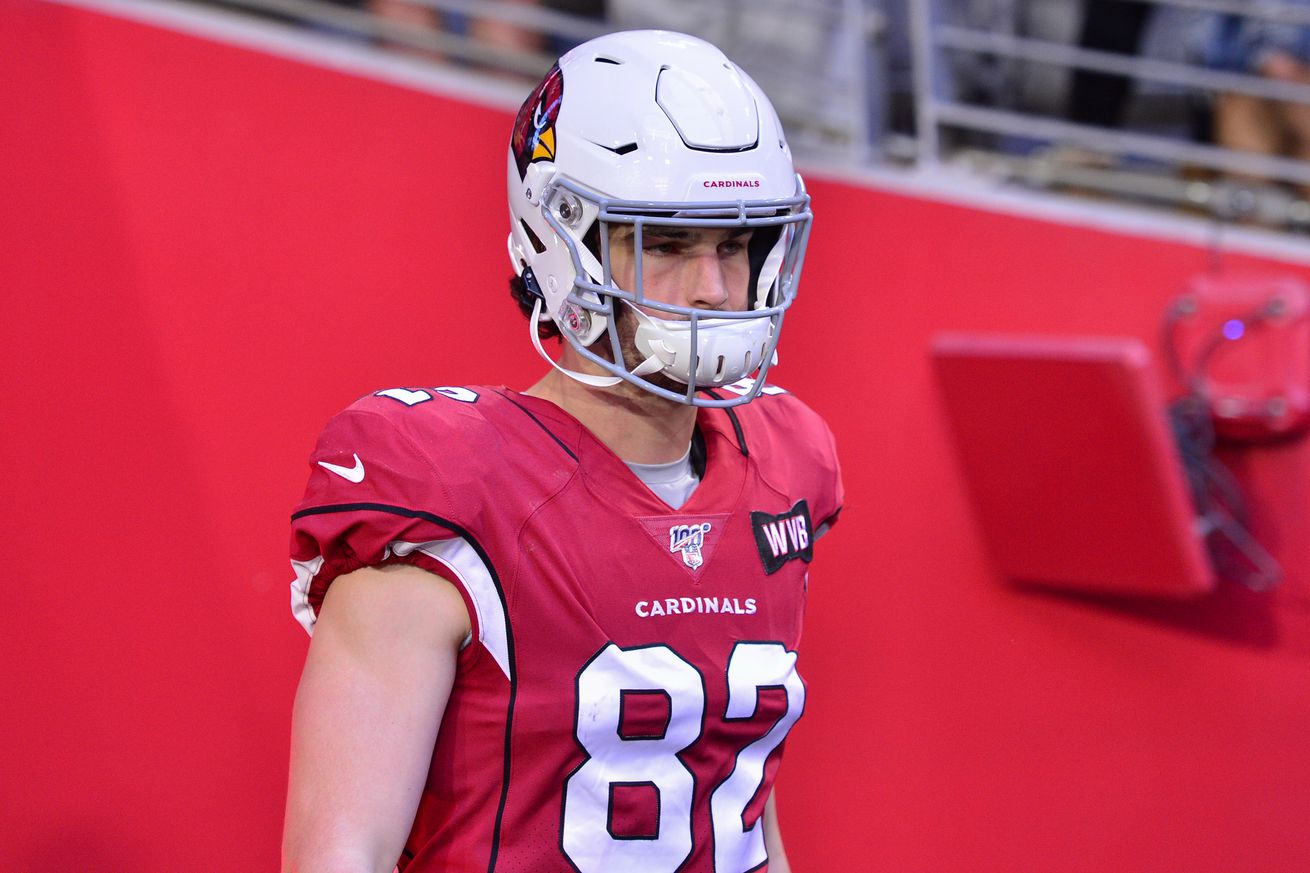 In their home opener and game 2 of the 2020 season, the Arizona Cardinals have their hands full with a well-coached Washington Football Team. Anyone who watched the Football Team roar back at home from a 17-0 deficit to beat the Eagles, can see that the Football team boasts a furious pass rush, some feisty CBs, a quick blitzing ILB, a young, athletic QB, a fast rookie RB, a veteran banger RB, a swift, smooth WR, an under-rated TE and a new, veteran head coach who is already putting his stamp on this “no-name” team.

In my way of thinking, it was good that that the Football Team won their opener, because now this can not be considered a “trap” game for the Cardinals. The tape of the Football team’s win over the Eagles should provide the Cardinals the necessary respect and attention that this NFC East opponent warrants.

But, I also get the sense that the Cardinals are so excited about what they are building in Arizona that they are going to be amped up and ready to play whomever the opponent is.

Like so many of you, I do not agree with a significant number of these player grades for Week 1. But, I thought you would appreciate at least seeing what they were, by comparison.

The Nitty-Gritty on Offense

For one, I believe that WAS will have a tough decision to make as to how wide their edges rush Kyler Murray. They will see how Kyler Murray exploited wide pass rushing arcs in the SF game. The rule of thumb versus a running threat at QB is to employ a controlled rush from the edge, so as to try to relegate the QB to the pocket and not give him wide open escape routes.

For two, the Cardinals were able to slow down the SF pass rush by chipping to one side and having the RB off-set to the other side where he is in a position to help on the opposite DE.

Knowing this week that Rivera loves to send ILB Jon Bostic on A and B gap blitzes, I think it behooves the Cardinals to have the RB key on the inside blitz, which means that we are likely to see the Cardinals employ more balanced 4 receiver sets, with “twins” to both sides so that Larry Fitzgerald can chip on one DE and Dan Arnold can chip on the other DE. The Air Raid staple “Mesh” play (the one that Hopkins nearly scored his TD on) is made to order for “twins”, for example.

Ways in which to stifle a strong pass rush:

4—-QB draws, waggles and bootlegs, with chips on the play-side DE

Where the WAS defense is weakest:

1—-Covering TEs. This could be a big, breakout game for Dan Arnold. If Maxx Williams is out this week, look for the Cardinals to promote TE Jordan Thomas as a #2 TE receiving option.

2—-The Gray Fade Area and Middle of their Zone Coverage—-Rivera loves his zones, but he doesn’t quite have the kind of zone savvy LBers that he had in Carolina (former CAR LB Thomas Davis may be activated for this game, but he’s coming off an injury and may not be as fast as he was in Carolina). The Redskins CBs will often press and then stay in the flat if it’s zone, which leaves a grey area between them and the Cover 2 safety. Or the CBs play deep third leaving plenty of cushion to take advantage of underneath.

3—-Man Coverage. Not sure if any of the WAS CBs can handle DeAndre Hopkins. They are better zone CBs than man CBs. I would imagine they will give Hopkins a fair amount of cushion and try to keep everything in front of them.

4—-Deep Seams and Posts. The 49ers had so much respect for the potential long ball versus ARI that they employed 2 deep safeties more than 60% of the time. Part of this had to do with wanting to shade one deep safety to Hopkins’ side and thus were worried about not giving deep help to the side of the trips. I think there’s a very good chance that Dan Arnold and Jordan Thomas can bust big plays over the middle and ups the seams and that the speedy Andy Isabella can make an impact against this defense, whose safeties tend to struggle at times in coverage, particularly if you bait them with TEs over the middle.

The Nitty-Gritty on Defense:

Because of this, I believe this is a game that the Cardinals can focus on being very aggressive in pressuring 2nd year QB Dwayne Haskins and that they can defend the run, as they say, while rushing the passer. ILBs Jordan Hicks and De’Vondre Campbell have to make better reads and tackles this week.

In man coverage, it would be wise to put Patrick Peterson on Terry McLaurin, who is WAS’s fastest and best WR threat. Then they can put Dre Kirkpatrick on Steven Sims and Byron Murphy on Dontrell Inmann (or vice versa). WAS may at times line RB/WR Antonio Gibson in the slot, so matching him up with one of the faster defenders like Kirkpatrick, Reddick or Simmons would be smart . De’Vondre Campbell, Haasan Reddick and Isaiah Simmons are good matchups against TEs Thomas, Baugh and Sprinkle.

Where the Redskins’ Offense is Weakest:

While the right side of their offensive line with RG Sherff and RT Moses is stout, the left side of their offensive line with LG Martin and LT Geron is an issue. Because of that, one would expect WAS to try to chip and double team Chandler Jones. Thus, one would expect Vance Joseph to counter with TEX twists and CB or S blitzes to Chandler’s side. The WAS interior can be exploited on the pass rush, as the Eagles did on a few occasions. Angelo Blackson and Zach Allen flashed good inside rushes and hopefully Jordan Phillips and others will take steps forward this week.

It’s pretty amazing to think that the Eagles’ defense only gave up 239 yards to WAS (limiting them to 5/18 3rd down conversions, yet lost by 10 points, 27-17, giving up 27 unanswered points). The WAS defense created 8 sacks and 3 turnovers (2 ints., 1 fumble) and basically dominated the 2nd half, while the offense capitalized on the turnovers and the momentum that came with it when it needed to.

The Nitty-Gritty on Special Teams:

The Cardinals got their momentum turned around with the outstanding punt block in Game 1. Chase Edmonds looks smooth as the kickoff returner (42 yards return on his only return). Christian Kirk wasn’t able to get in a good punt return thanks to deep direction punting by SF. This week’s punter Tress Way averaged 47.0 yards on 7 punts last week, pinning 2 inside the 20 and only giving up 14 yards on 3 returns. if Way keeps punting near 50 yards, chances are that Kirk or Isabella could break one this week.

The Cardinals’ kicking game needs to improve from Zane Gonzalez at home this week. Andy Lee punted 4 times for a 47.8 average and downing 1 inside the 20. Jeff Rodgers will be stressing the punt coverage this week, as the unit gave up 29 yards on 3 punt returns (nearly 10 yards per return). The kickoff team held SF to 16 yards on 1 return. The Cardinals could apply stronger pressure up the middle and from the edge on FG and XPT tries.

The 403 yard, 3 TD success the Cardinals had on offense versus the 49ers’ prolific front 7 is good preparation for playing the WAS defense this week. If the Cardinals can avoid turning the ball over and can patiently take what the defense gives them, they may be able to score more points this week, particularly if they avoid the drive stalling penalties they incurred in Game 1.

Plus, if the Cardinals’ special teams are as special as many of us think, they could have a major impact on this game.

The key to the game is which team can create the momentum and build off of it throught the game. Both teams were able to capitalize on their 2nd half momentum last week. The big question is—-which team can do so two weeks in row?