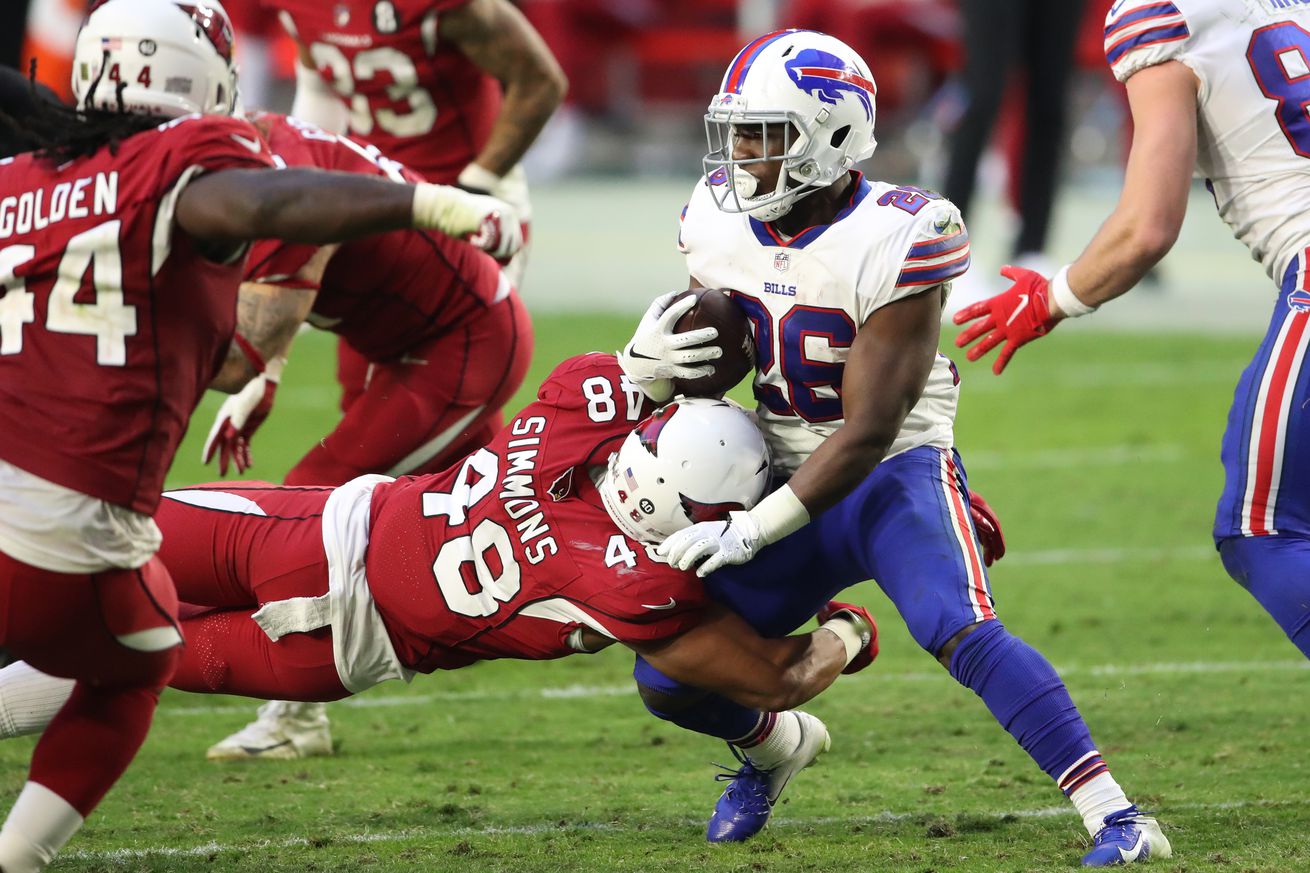 The entire world is still shocked by the incredible Kyler Murray game-winning Hail Mary touchdown to DeAndre Hopkins in the final 11 seconds of the game for a final score of 32-30 over the Buffalo Bills.

Talk about a game for the ages and the play of the year.

Aside from the Cardinals two elite talents on the offense, there were many other players on the team that provide huge contributions in the victory. One player that stood out the most that has not seen much playing time until last night was the Cardinals No. 8 overall pick Isaiah Simmons.

Though he is not having the kind of season he was expecting for such a high-profile pick, Simmons continues to impress when his number is called.

Simmons played in a season-high 32 defensive snaps (53 percent) while also receiving seven snaps (25 percent) on special teams against the Bills. He saw an increase in playing time on the defense after starting inside linebacker De’Vondre Campbell went down with an injury in the third quarter.

The rookie linebacker was graded well by Pro Football Focus.

With that said, here are five moments in the win that should ultimately help Isaiah Simmons’ case to be in the Cardinals’ starting lineup for the remainder of the season and beyond.

On this play with 1:08 remaining in the first quarter, everyone except the defensive backs blitzed to pressure the quarterback. Despite this possession ending up being an 11-yard completion from Josh Allen (17) to John Brown(15), Isaiah Simmons (48), from my perspective, faked a drop off into coverage with his initial movements to effectively blitz and shed the block by Dawson Knox (88).

Simmons was the only player on this possession to win his matchup.

At 1:26 in the 3rd quarter at Buffalo’s 39-yard line, Josh Allen threw a deep pass intended for Stefon Diggs (14) that was picked off by Patrick Peterson. Though the announcers and the NFL website said that Diggs was the intended target, this pass, in my opinion, looked like it was intended for Dawson Knox who was covered by Isaiah Simmons. In any case, Simmons ran stride for stride while in very good coverage on the second-year tight end.

Here is another great play by Isaiah Simmons. With 12:45 remaining the fourth quarter, Simmons ran past left tackle Dion Dawkins (73), nearly sacking Josh Allen. What was even better was after Allen completed the pass, while falling, to Devin Singletary (26), Simmons hustled back up to make the tackle for a five-yard loss to force a fourth down.

Again, this is another instance where Simmons is the first player on the defense to win his matchup, flustering Josh Allen to force a pass.

On this play with 8:46 on the clock in the fourth quarter, Isaiah Simmons dropped back into coverage and executed his assignment perfectly. His athleticism is at full display with tight coverage on Singletary that ended up being an incompletion but called back due to an illegal shift on the Bills’ offense.

His effort and technique in a strong attempt to swat the ball away while not drawing a penalty is just textbook football. He has the speed of a safety and the build of a linebacker. You are starting to see why he was such a coveted player by the Cardinals and many other teams during the 2020 NFL Draft.

No matter what is thrown Simmons’ way, he always finds a way to win his matchup. With the game winding down to its final minutes, every player on the defensive side of the ball did their jobs well. Not only were the defensive backs shutting down their assignments, the defensive line contained Josh Allen in the pocket as well. On this play, Simmons dropped back into the flat with Zack Moss (20) being the player he has to cover. Simmons gave Moss no opening, forcing the incompletion by Allen.

Isaiah Simmons has already proven that he is by far the most talented linebacker on the Cardinals’ defense. He did everything well from rushing the passer, to shutting down his assigned receivers, and simply making textbook tackles.

At some point, defensive coordinator Vance Joseph needs make Isaiah Simmons a permanent starter due to his progression and him being such a high draft pick.

In a short week as the Cardinals are scheduled to faceoff against the Seattle Seahawks on Thursday Night Football, Campbell might not be healthy enough to play.

An even more expanded role for Isaiah Simmons is coming. If he continues to play like he did against Buffalo, it will only be a matter of time before Simmons supplants Campbell on depth chart. He should be the starter now and for the foreseeable future.