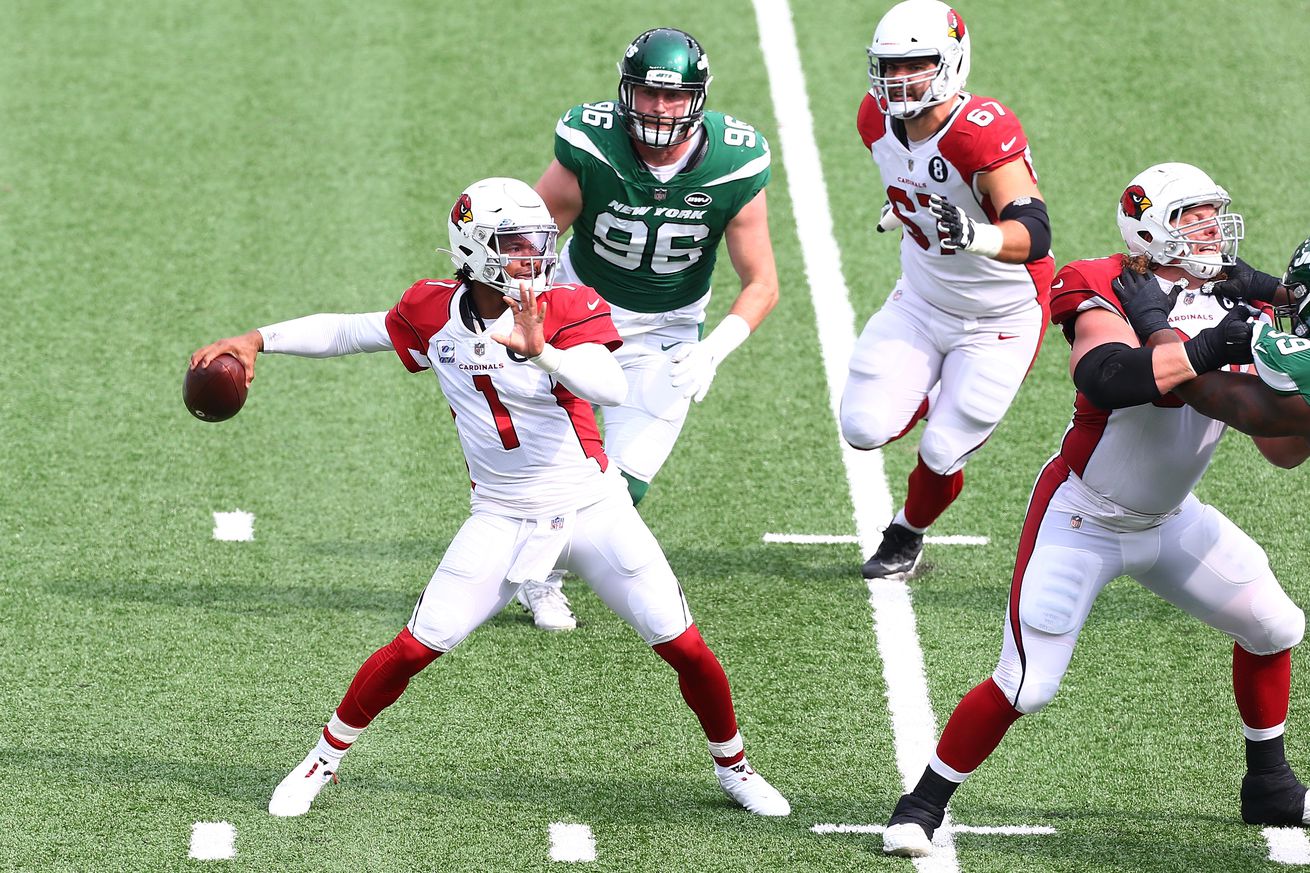 “The Cardinals went into last Sunday’s game with hopes of ending a two-game winning streak and most people thought they’d get it done given the fact that they were playing the Jets.

Arizona cruised to a 30-10 win and the play of quarterback Kyler Murray was a big reason why they got the win. Murray was 27-of-37 for 380 yards, a touchdown and an interception. He also ran for a touchdown to help the Cardinals get to 3-2 on the season.

Murray was named the NFC’s offensive player of the week on Wednesday in recognition of that performance. It’s the second time that Murray has taken the honors as he also did it once during his rookie season.

Murray will try to keep the Cardinals rolling in prime time this week. The Cardinals will be in Dallas on Sunday night.” (PFT, NBC)

Interestingly, Kyler won the award in Week 6 last year. Thus, this year is he is one week ahead of schedule!

I wrote quite a bit about Murray over the weekend and following the game—-and got quite a bit of pushback for calling Murray a “franchise QB.”

Back on the day that Kliff Kingsbury was hired, I wrote that it was going to be a “Murray Christmas” 2019 draft for the Cardinals. I predicted that the Cardinals would draft Kyler Murray with the #1 pick and would trade Josh Rosen.

The immediate pushback that I received on that prediction was seismic. Many of you were certain that Kliff Kingsbury was hired to coach Josh Rosen.

I tried to explain all of the cogent reasons why Murray would be the franchise QB—-basically because he is a superior talent to Rosen in virtually every aspect of QB play. Plus, there was the obvious Kingsbury connection, including Kingsbury’s prophetic interview at Texas Tech about what he would do with the #1 draft pick, if he had it in the 2019 draft.

I also tried to explain why Murray would give NFL DCs nightmares. If they play man, they had better have a spy on Murray, but even Nick Saban said “one spy on Murray is not enough, for he blows right by him.”

If you zone him, he can pick it apart with his passing accuracy.

If you rush him too hard, he can take off on a dime and run for chunk yards.

His RPO ability in the red zone is off the charts.

Just look at the Jets game and what one of the best DCs in the NFL (Gregg Williams) resorted to doing. After Murray burned his pass rush for a couple of nifty scrambles while playing man coverage, Williams told his edge rushers to take “controlled” rushes so as not to let Murray break contain. Then, he told his DTs, not to rush at all, but to stay at the line of scrimmage to try to prevent Murray from taking off up the middle.

Williams wanted to ensure that Murray would have to beat his defense from the pocket.

So yeah, Murray only ran less than a handful of times—-that part worked.

But, in turn, Murray put up his career high in passing yards at 380.

The point is—-no DC in the league has a book on Murray—-and because of Murray’s elite dual-threat ability, there may never be one—-just as there is still no book on Patrick Mahomes, Russell Wilson and Aaron Rodgers.

Some fans have been insisting that Murray is not a franchise QB—-he is a “system QB.”

Let me explain why the system QB argument is a mischaracterization.

Kyler Murray could excel in any NFL system.

Imagine him for example under center in the Rams’ West Coast system, running all their bootlegs and waggles, the very ones that Jared Goff has had success with. But, if Kyler Murray were on the Rams, do you really think Sean McVay would still start Goff?

I have said this before, and I will say it again—-if the 49ers had the #1 pick of the 2019 NFL Draft instead of the Cardinals—-even though the 49ers had Jimmy Garoppolo, there is no way that Kyle Shanahan and John Lynch would have passed on Kyler Murray.

Not even for Nick Bosa.

In taking this a step further, how many NFL teams today would trade their current QB right now for Kyler Murray?

In my opinion, it would be every team but the Chiefs (Patrick Mahomes), Seahawks (Russell Wilson) and Packers (Aaron Rodgers).

What I find remarkable about so much of the criticism and negativity that a number of Cardinals’ fans have been expressing about Kyler Murray is how Kyler’s extraordinary skills are already being marginalized or taken for granted.

But I believe that some fans can’t get over that he’s 5’10” and that Terry Bradshaw is calling him “Mighty Mouse.”

Yet—-don’t you understand that no QB has ever used his lack of height to his advantage the way Kyler Murray has? This has a major reason to do with the fact that the Cardinals are #2 in the NFL in having the least QB hits. And—-Murray’s 7.2 yard per carry average is #1 in the NFL through 5 weeks.

Kyler Murray in his 1st 21 games has won 2019 NFL Offensive Rookie of the Year award and 2 NFC Offensive Player of the Week awards, setting or tying a number of records along the way.

These are the kind of accomplishments that a franchise QBs achieve.

Murray’s not going to be perfect, as his own teammate, Chase Edmonds, has said to him—-he’s going to make some mistakes, like all QBs do, particularly young learning-on-the-job QBs in the NFL.

But, for the first time that I can remember in my 57 year love affair and roller coaster ride with the Cardinals we have a young QB who just about every team in the league is envious of.

I don’t know about you, but I no longer have a pestering feeling of QB envy.

Man it feels so awesome not to be looking at the grass on the other side of the fence when I am watching other NFL games.

it’s a liberating feeling—-if you want to dare to embrace it.