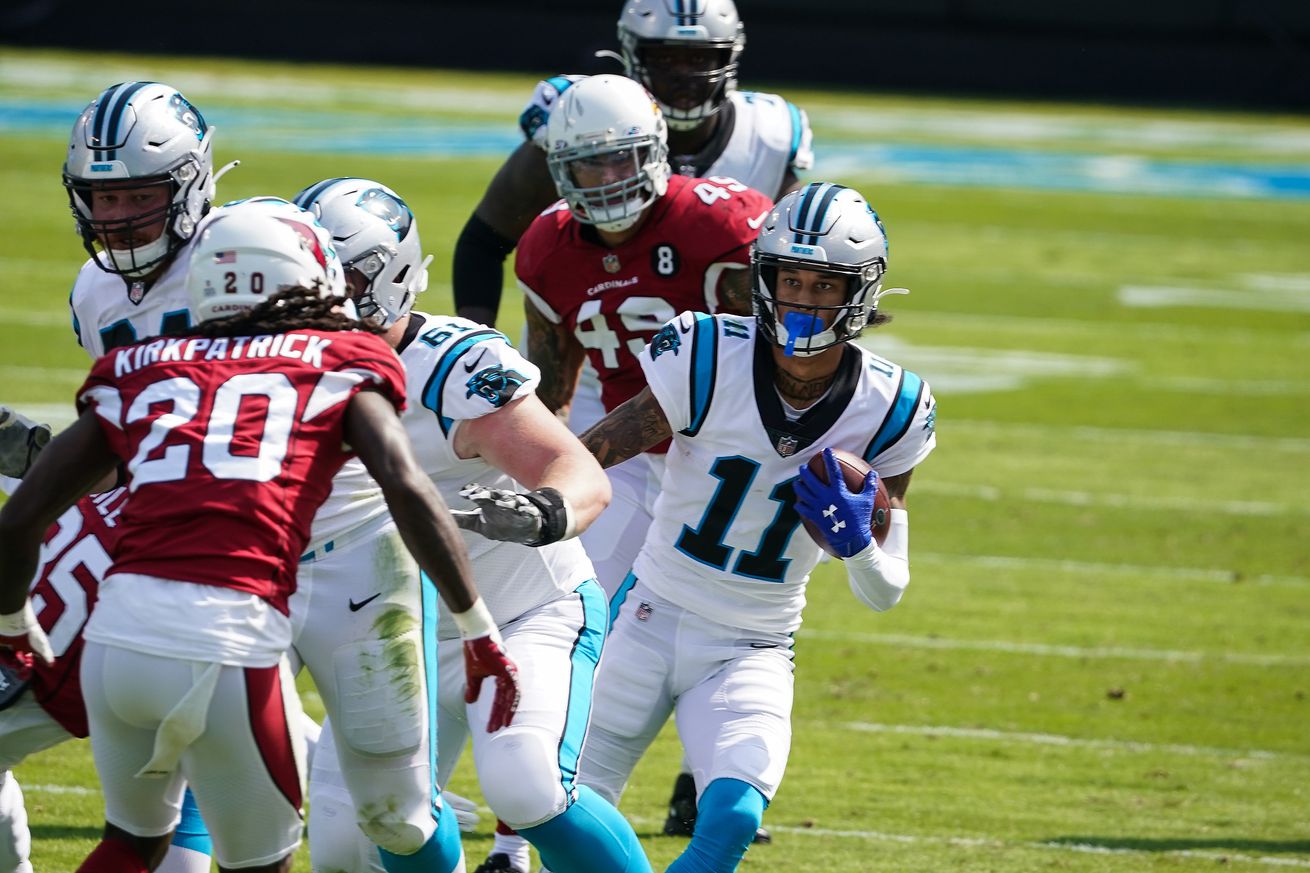 After their 2-0 start, were the Cardinals actually listening to Keyshawn Johnson when he bet Burns and Gambo that the Cardinals won’t win more than 6-7 games this year because “they are not built to last”? Here’s the link:

Despite Cardinals’ fans predicting a 5-0 start because the team was heading into the “soft part” of their schedule with the Lions, Panthers and Jets—-thus far, the Cardinals have been the softer team versus the Lions and Panthers.

Since the 4th quarter when the Washington Football Team passed and ran right through the Cardinals” “soft zone” “backed-off” defense for two easy TDs, the Cardinals’ defense has reverted right back into its 2019 form—-giving up big scoring drives to start the game and end of each half—-giving up long, time consuming drives—–amd, most annoyingly, giving up TD drives immediately after the Cardinals offense scores.

Steve Keim vowed that he would “fix” the defense this past off-season—-and he pushed all his chips to the middle of the table for DC Vance Joseph, even going as far as to take the blame for Joseph for the defensive woes last season.

Yes, I am just a fan—-but I was opposed to the Cardinals’ keeping of a DC who proved game in and game out that he couldn’t dial up a scheme where every receiver was accounted for. And I don’t even want to think of the ill-advised delayed safety blitz Joseph threw at the 49ers with the Cardinals ahead in the 4th quarter last year—-because watching Joseph’s defense today was painful enough.

After 16 games last year and 4 games this year—-a red flag that has been waved in our faces long enough and that is that Vance Joseph can’t get his prized veterans to play with a sense of urgency and the highest levels of effort. Terrell Suggs aptly described it as “stealing from the Cardinals.”

Just as bad and possibly even worse—-after being gifted the addition of S/LB Isaiah Simmons, the most versatile and athletically gifted defensive playmaker in the 2020 NFL Draft—-Joseph won’t even play the 2019 Butkus Award winner and consensus 1st Team All-American for any stretch of snaps—-nor even for snaps during junk time, as we saw today.

Fans were heckling Blake, Johnny and me on Twitter this week (calling us “f’n morons”) for pleading with the Cardinals to start Isaiah Simmons over newly acquired S Curtis Riley—-insisting to us that “the coaches are smart to limit Simmons’ snaps”—-and then making the argument that Simmons didn’t have a chance to get ready during this odd off-season.

Vance Joseph and his staff have had the opportunity to coach Isaiah Simmons and craft him a niche—-since April. They have been working with Curtis Riley for what, 2-3 weeks?

Simmons is not a slow learner—-in fact, Brent Venables, Isaiah’s DC at Clemson, designed a new game plan specifically for him for every game last year and Venables said he had never coached a player who was so eager and quick to learn.

Today we saw the Panthers knew what to do with their 2nd round S/LB playmaker Jeremy Chinn—- who is leading their team in tackles.

Simmons has been with Vance Joseph for over 6 months now—-and it is already clear that Joseph is not sure how to coach him or use him.

That in itself means that a big change is needed immediately, if you believe as I do that, isaiah Simmons is the Scotty Pippin addition to Kyler Murray, the Michael Jordan.

Wade Phillips has Super Bowl rings as a defensive coordinator and is a legitimate Hall of Fame candidate. He has said he would welcome a swift return to the NFL. If the Cardinals do not call him asap—-we know—-just as we knew back in 2014—-when BA and Steve Keim bypassed the chance to hire Phillips to replace Todd Bowles in favor of promoting an under-qualified 3rd year defensive assistant in James Bettcher—-that the Cardinals are not all-in on winning.

If you have watched the Rams offense this year—-with the Cardinals having lost to Sean McVay six straight times (all blowouts but 1)—-no one on the planet would know how to defend Sean McVay’s defense better than Wade Phillips. This year’s Rams games might make the difference as to whether the Cardinals make the playoffs.

But if Keyshawn Johnson is correct—-6 to 7 wins is not going to get it done.

Wade Phillips has the gravitas and experience that few DCs possess.

Last week I expressed a worry that as much as I appreciate Kliff Kingsbury’s offensive knowledge, if he can’t get his star players to show up every week, then he’s not going to be a successful NFL head coach.

Kingsbury’s answer this week to what he called his poor play calling last week was to ramp up the volume of -2 to 3 yard passes—-just at a time when he should be “opening up” the offense for Kyler Murray, not closing it back down.

We have seen Kingsbury’s offense for 20 games now—-and it has already become predictably vanilla. We know that Kingsbury prefers and loves to open up the offense with his 10 personnel, and yet it feels like he is not only handcuffing Kyler Murray, he is handcuffing himself by not running what he’s best at.

In the NFL, offensive coordinators cannot be afraid of letting their star QBs cut it loose. Sure, at times it may lead to turnovers—-but at least versus the Lions, Kyler was being aggressive in the passing game. Today, Kyler looked uneasy about throwing any pass more than 10 yards. That should never happen with Kyler.

If Kingsbury finally shows us what his offense looks like when he opens it up—-I think he really needs to tap on his fastest players—-so often this offense looks slow (not in tempo but in running speed).

Who ever told Kenyan Drake to pack on weight this off-season?

He’s a step too slow for this offense now.

Chase Edmonds is the better fit.

And I am anxious to see Eno Benjamin and Jonathan Ward. Aren’t you?

Kingsbury needs to bring faster players like Andy Isabella, Christian Kirk and JoJo Ward into the slot—-and he needs to threaten defenses deep more often, because just like last year defenses are hammering on our players within a 20 yard rectangle.

If you want to keep De’Andre Hopkins healthy—-limit the bubble screens to him except ones near the goal-line. So often those screens wind up with Hopkins being swarmed by 3-4 tacklers. Get him the ball downfield where he can make one move and run for RAC yards.

It can’t be a good thing that Hopkins misses practices all week. Not for an offense that looked out of sync for most of the game.

How in the world does Kyler Murray miss a wide open Larry Fitzgerald on the first 3rd down conversion? Especially after saying last week that it would be a priority in this game to get Fitz the ball. And then, why in the world do Kingsbury and Murray keep throwing Fitz the ball on 0 yard out passes and -2 yard screens? Do they not understand how to use Larry Fitzgerald?

Murray did not come into this game looking sharp after a loss that he took the blame for—-but that’s as much on Kingsbury (who also took the blame) as it is on Murray. Plus, if you really want to get Murray in a rhythm early, you do not run the ball on the first two plays.

I get that all NFL players and their coaches have their differences—-and it’s clear that Kyler can be a little surly when things are not going well. But, I wonder whether Kyler respects Kingsbury the way he respected Lincoln Riley, for example. I didn’t see Kyler blowing off or snapping at Riley the way he does to Kingsbury on occasion.

The past two weeks we keep hearing Kingsbury and Keim talk in syrupy superlatives about the “outstanding veteran leadership we have in the locker room” and yet, on the field it is difficult to see it, especially from some of the team’s highest paid and most heavily counted on players.