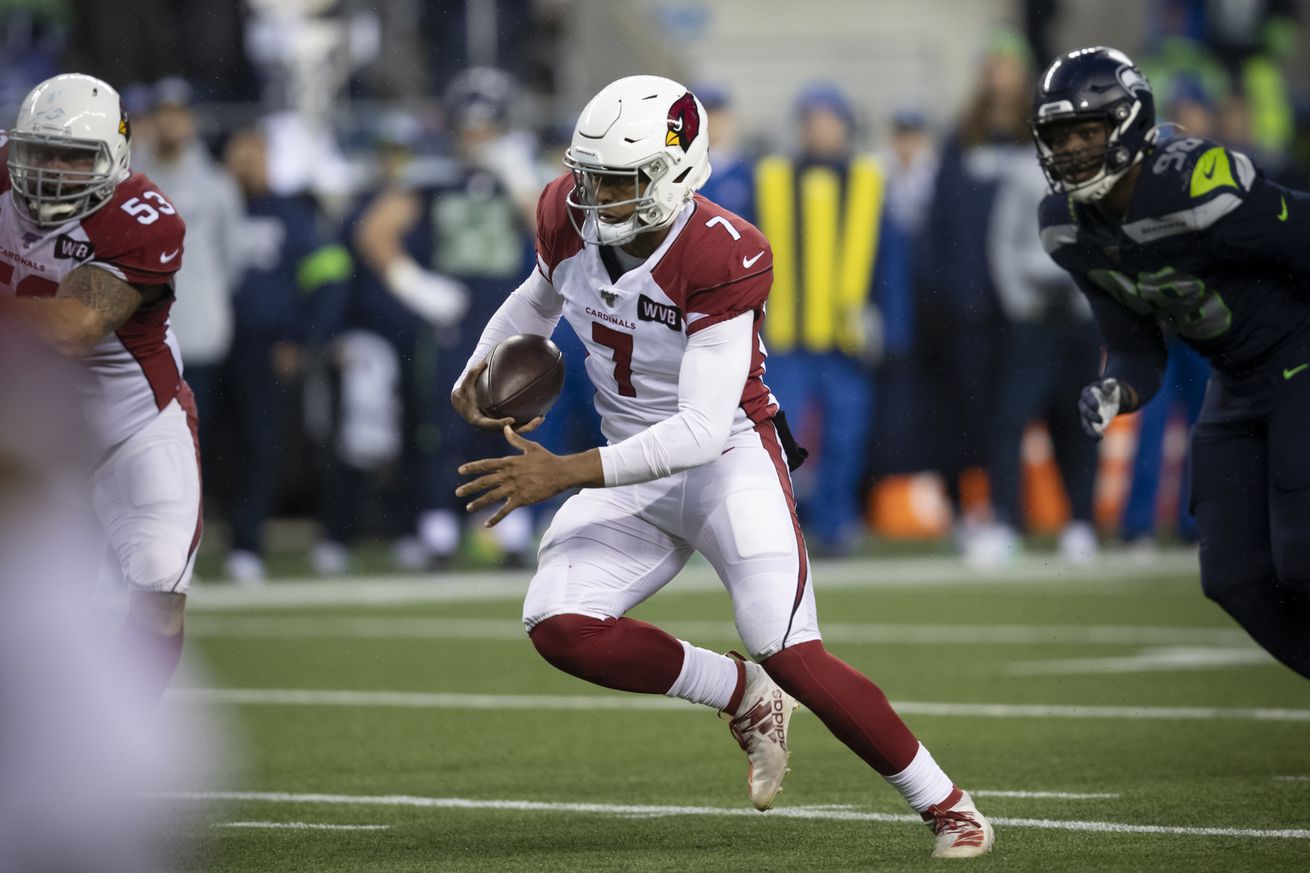 Backup QB Brett Hundley helped lead the Cardinals to a win in Seattle last season. Where does he rank on the Redbirds 50? | Photo by Stephen Brashear/Getty Images

Time for another batch of Redbirds 50 rankings. This week, we start to explore our offensive and defensive depth.

Last week, we counted down the #41-50 players in this year’s Redbirds 50, our ranking of the top 50 Arizona Cardinals players. That batch was all special teamers and back-of-roster depth. This week, continue to go through our depth with the #31-40 players. We’ll start with a guy who hasn’t played a snap in the NFL but could be in contention for a spot in the starting lineup this season.

2020 Outlook: Although Gaillard didn’t play a single down in his rookie season, he figures to battle with Mason Cole in training camp for the starting center spot. Even if he loses out to the 3rd-year player, Gaillard will still have a lot of value as the backup pivot who can play some guard in a pinch. Either way, expect him to actually play some snaps in his second season in the league.

2020 Outlook: The next two players on this list are very similar. Like Jones below, Peterson (an early-season addition to the roster) helped fill in at CB when the team was without Robert Alford all season and the other Peterson for the first 6 games. While this Peterson didn’t stand out, he didn’t embarrass himself either while also contributing on special teams. Players this far down the roster need to contribute in multiple phases of the game, and Peterson fits the bill.

2020 Outlook: I ranked Jones slightly ahead of Peterson because he seemed to make slightly more of an impact on defense—as evidenced by the 6 passes defended. I remember watching a few games and always seeing him around the ball. He’s a decent depth corner and, like Peterson, contributes on special teams. Another solid back-of-roster player.

2020 Outlook: It’s easy to make a case for ranking Reddick even lower than this—he has yet to find a true position at the NFL level, and he’s fallen well down the defensive depth chart as a result. But he has a ton of starting experience, and I still think he has a whiff of potential as a situational pass rusher. If he can chip in, say, 4-5 sacks this season, he’ll justify this ranking. Still, this will almost certainly be his last appearance on the Redbirds 50, as the team recently declined his 5th-year option. He’ll be remembered as yet another 1st-round misfire by GM Steve Keim.

2020 Outlook: Claimed off waivers from the Saints in December, Arnold didn’t play for the Cardinals until Week 15, but he made an immediate impact, catching a TD in his very first game. Two weeks later, he went 4/76/1 TD against the Rams. Although TE didn’t play a huge role in Kliff Kingsbury’s offense in his first season at the helm, it’s clear that Arnold has potential. Perhaps he can help out in the red zone, an area where the team struggled mightily at times last season?

2020 Outlook: Bullard was yet another early-season waiver claim who went on to play a key role for the Redbirds last season. He came to the Valley via Chicago, where he was a spot starter along the D-line. He played much the same role for the Cardinals, helping to fill the void after presumed starter Darius Philon was released before the season began. Players like Bullard don’t jump off the tape or stat sheet, but he’s a competent, experienced defensive lineman who should play a decent complement of snaps in 2020.

2020 Outlook: Like most of last year’s rookies not named Kyler Murray, Allen was much more hype than actual production. He actually started Week 1 last season, but he was ineffectual for several games before injuring his neck. He barely played after that before going on IR in November. But his college production and tape still hint at a guy capable of being a productive NFL player. He’ll have more competition for snaps than last season, but he should be squarely in the mix for the starting gig at DE opposite Jordan Phillips.

2020 Outlook: Here we go again, hyping this year’s rookie class. What are two 4th-round rookies doing ranked above two former 3rd-round picks? In this case, it’s more about the veterans than the rookies. We’ve almost certainly already seen Bullard’s ceiling—he’s an adequate rotational player, nothing more. And Allen’s rookie season was so underwhelming that it’s hard to know what to expect from him this season. Meanwhile, Lawrence is a 4-year college player and a key cog in a national championship defense. Is there a bit of shiny new toy bias going on here? Sure. But I’d rather buy stock in Lawrence’s ceiling than Allen’s at this point.

2020 Outlook: Most of what I said about Lawrence above holds true for his fellow 4th-round selection, but I’m even higher on Fotu’s potential. He was one of the best run stuffers in the draft, and he was a cog in an even better defense than LSU’s. The former Utah Ute will immediately improve the Redbirds run defense, and with Corey Peters on the last year of his deal, we might be looking at his replacement in the starting lineup in 2021. It’s possible that one or both of these rookie D-linemen struggle as badly as Allen did last season, but I wouldn’t bet on it.

2020 Outlook: Hundley saw significant action in only one game last season, but it was a big one. After Kyler went down in Week 16 with the Cardinals leading the Seahawks 20-7 in Seattle, the Seahawks rallied to make it 20-13 with about 10 minutes left. A patented Russell Wilson comeback victory seemed predestined. But Hundley coolly led the Redbirds on a 9-play, 78-yard TD drive to seal the game that included several crafty runs by the backup QB. That earned Hundley a lot of goodwill with Cardinals fans, and he enters 2020 as a capable backup.

And we’re through another batch of 10 players on this year’s Redbirds 50. We’ll get to some more recognizable names next week. In the meantime, let us know your thoughts on these guys and your predictions for #21-30 in the comments!