Minutes after their David Johnson trade surfaced, the Texans and Cardinals will top that deal. The Texans have agreed to send All-Pro wideout DeAndre Hopkins to the Cardinals, Adam Schefter of ESPN.com reports (on Twitter).

Hopkins will be included in the Johnson trade, per Ian Rapoport of NFL.com (on Twitter). The seven-year veteran now becomes the centerpiece of said trade. Not only are the Texans taking all of Johnson’s contract, but it appears they are dealing Hopkins without getting a first-round pick back. 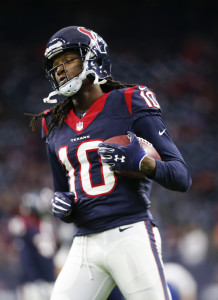 Interestingly, this deal thus far does not include any first-round picks. The Texans will trade Hopkins and a fourth-round pick for Johnson, a 2020 second-rounder and a 2021 fourth-rounder, John McClain of the Houston Chronicle reports (via Twitter).

This marks one of the biggest skill-position trades in recent memory, and the Cardinals will now have a Hopkins-Larry Fitzgerald–Christian Kirk receiver trio. A rumor surfaced earlier Monday about Hopkins being available, and SI.com’s Albert Breer adds (on Twitter) that the dominant receiver came up in trade rumors in August and October. Bill O’Brien took over personnel duties last May.

Hopkins, who will turn 28 this summer, has been a first-team All-Pro in each of the past three seasons. He’s made four of the past five Pro Bowls. One of the top contested-catch players in modern NFL history, the former first-round pick will now be tasked with helping the Kyler Murray-centered Arizona offense take steps forward. Cardinals GM Steve Keim interestingly got off the Johnson contract and acquired Hopkins without having to give up a first-round pick. The Cardinals hold this year’s No. 8 overall pick. The second-rounder they are giving up is the No. 40 overall selection.

Hopkins signed a five-year, $81MM extension in 2017. Three seasons remain on that deal. While it is certainly possible the Cardinals will redo his contract, as the Raiders did upon acquiring Antonio Brown last March, Hopkins is set to make just $12.5MM in 2020 base salary.

This marks an unusual move for the Texans, who have used Hopkins as their offensive centerpiece since Andre Johnson vacated that role several years ago. Hopkins has five 1,100-yard seasons since 2014, the last year he and Johnson were on the same team, and has 54 career touchdowns. His 504 receptions, 6,590 yards and 46 TDs each rank second in the league over the past five years (h/t Field Yates of ESPN.com). Both Kenny Stills and Will Fuller are under contract for 2020, but neither is signed beyond next season.

The Texans have been active traders since O’Brien took over as de facto GM (and now actual GM). They dealt two first-round picks and a second for Laremy Tunsil and unloaded third-rounders for Duke Johnson and Gareon Conley. This Hopkins-Johnson deal will give the Texans a second-rounder back, but the team obviously is not as strong offensively after making the move.