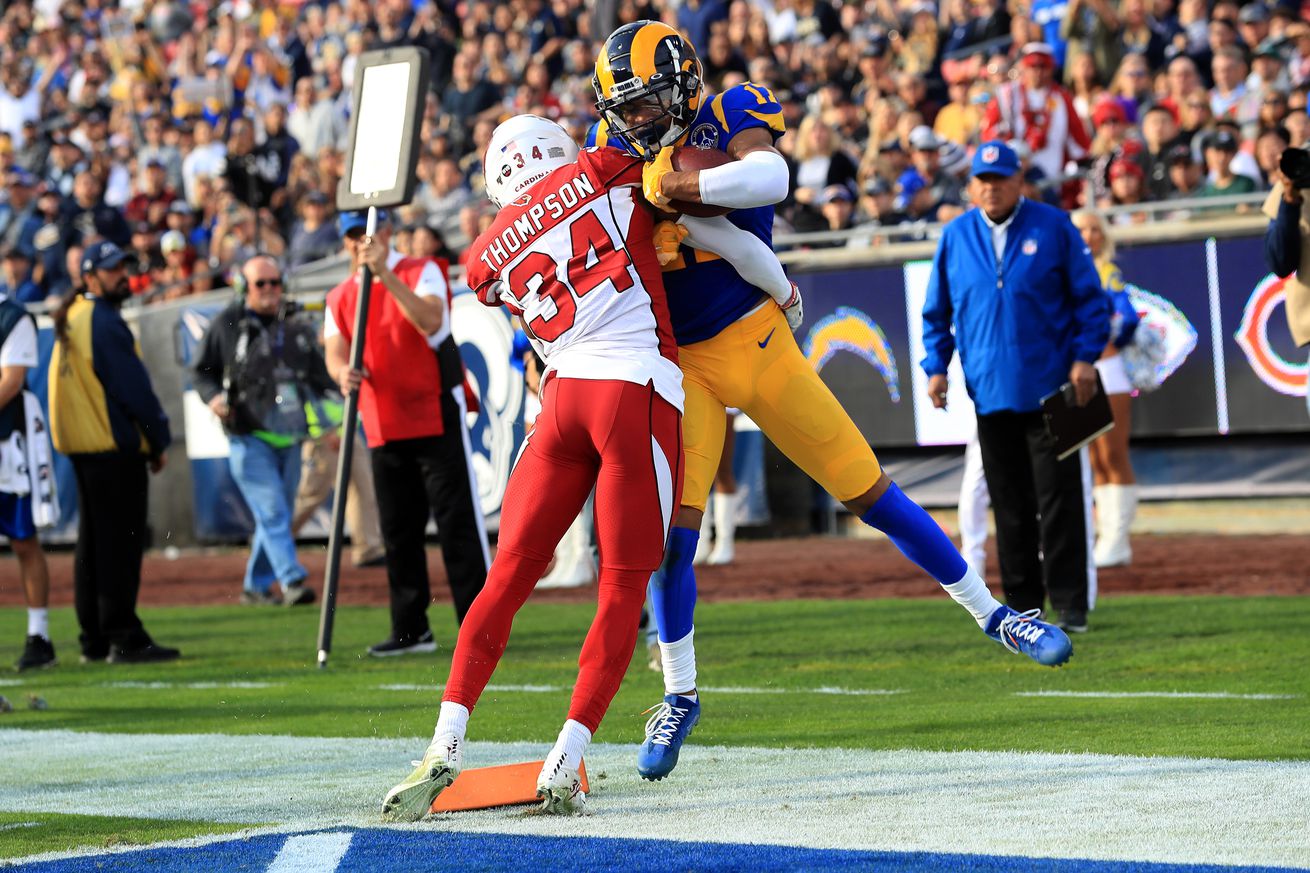 Which players are set to breakout during the 2020 campaign?

As we continue to dredged through the NFL offseason while patiently awaiting training camp, 2020 projections are all the rage.

For our Arizona Cardinals, I’m a big fan off looking for players entering a “pop” campaign and projecting their production.

What does it mean to “pop”?

Well, generally it coincides with a player that was previously drafted by the franchise entering either year two or three who is primed to take on a larger role with the club.

While it’s fun to project these folks in the heat of the summer, we generally won’t have a firm grasp of who’s ready to take the next step until training camp. We’ve seen examples in the past of players who clearly show up to camp ready to take their game to the next level.

Former Cardinal WR Steve Breaston, entering into his second NFL season back in 2008, is one that continually comes to mind. As a rookie, Breaston made some contributions but it wasn’t until the following training camp in which the team and media alike took note of the clear ascension to his game.

Another previous year two jump came from former Cardinal DE Calais Campbell, who transitioned from a backup in 2008 to taking over as starter for the departing Antonio Smith. Campbell arrived to training camp noticeably more powerful than the previous year, and responded that season tallying seven sacks in the process.

While some players are late in their development, most of the time a red flag can be drawn if said player isn’t ready for a larger role come year two or three.

With that being said, here are my three “pop” Arizona Cardinals for the 2020 NFL season.

If you would have asked me my top candidate for a breakout season a year ago, I’d have gone with Kirk. That’s how high I am on his eventual development into a consistent 1000 yard receiver in this league.

Unfortunately, while flashing his usual burst and quickness, Kirk was hampered by injuries and inconsistencies in 2020. Too often then not, when Kirk was healthy, he was disappear for large stretches during games thanks to an inability to separate.

What made those efforts so frustrating was when you’d see flashes of brilliance like his week two six catch, 114 yard effort against the vaunted Raven’s defense.

Kirk may not have number one receiving ability and that’s ok. The addition of All Pro WR DeAndre Hopkins this past off season likely benefits Kirk’s longterm outlook with the team. The young receiver should see more opportunities to feast on the likes of number two and three corners as he continues to refine his craft.

I still feel confident in comparing Kirk’s game to that of former Lion and Seahawk standout Golden Tate, who didn’t top 1000 yards receiving until his fifth NFL season.

The Cardinals doubled down on their belief in Kirk’s longterm outlook with the team by opting not to select a pass catcher in the historically receiver rich heavy 2020 draft.

Say what you want about this former Aggie, but he has the necessary tools to be a capable number two receiver in Kingbury’s pass happy offense. I still believe he’s on track for big things this year and will officially predict he surpasses 1,000 receiving yards in the process.

Don’t discount his familiarity with the system, something that even Hopkins still needs to learn. That will benefit Kirk immediately, especially early in a NFL season that will greatly reward those with team continuity.

Thompson was somewhat of a forgotten man when the season began a year ago. The team had inked veteran D.J. Swearinger to pair with emerging star Budda Baker at safety, so the expectation was Thompson would merely provide depth and special teams play.

That plan was suddenly halted early in the year when the once vaunted Cardinal secondary was consistently torched week after week. Swearinger looked like a shell of his former self and was promptly released by the team just a month into the season.

Thompson had an opportunity to capitalize on the team’s sudden lack of experience at safety while also beating out fellow Thompson fifth rounder Deonte for playing time.

Jalen Thompson entered the starting lineup for good last October and immediately injected some much needed athleticism at free safety. Like fellow CB Byron Murphy, Thompson was learning on the fly transitioning from the Pac-12 to the uber talented NFC West.

To his credit, the former Washington State standout responded and very much looked the part of a high draft pick as he finished the season with 45 total tackles, 3 PD and an INT.

His play officially “popped” off the screen, which is something that is often times more important than a box score.

Underachieving LB Haason Reddick is a good example of this.

I think it’s fair to say that if Thompson had been drafted back in April 2019, knowing what we know now, he’d had likely gone late on day two.

To this point in the off season, the Cardinals have not added a veteran safety and plan to utitlize Jalen, Deonte and Budda in a secondary that should yield far better results in 2020.

First round pick Isaiah Simmons also figures to see time at the position, but that should not discredit the development of Jalen Thompson as he enters year two. Positional flexibility is key, and Thompson has shown enough physically and range to earn time at either free or strong safety.

There is a common theme with players like Simmons, Baker and Thompson and that’s their ability to play multiple roles.

I do not advise going back and reviewing 2018 Arizona Cardinal tape.

If you are so brave, however, make sure you key in on a certain rookie center. That season, as disastrous as it was, did see the developmental of a former third round pick manning the center position for all sixteen games.

Mason Cole was sacrificed to the wolves as a rookie on an offensive line that otherwise lost every other capable starter before the year was over. Cole, to his credit, did not miss a snap and earned the respect of his peers in the process.

While I am generally one for analytic grades, even for rookies, I do not think it’s at all fair to judge Cole on what he did under the tutelage of one Mike McCoy.

Yet many were quick to criticize Cole after Cardinal head coach Kliff Kingsbury named returning veteran A.Q. Shipley the team’s starting center to begin the 2019 season. While frustrated, Cole responded by quickly learning multiple positions along the Cardinal offensive line on top of being the first man off the bench due to injury.

Kingsbury later went on record and said Cole’s position flexibility made him the most valuable Cardinal offensive linemen.

Cole made his mark in a short stint at guard last season following an injury to right tackle Justin Murray. In his two games as a starter, the offense averaged 26 ppg while running back Kenyan Drake netted nearly 200 total yards from scrimmage.

To Kingbury’s credit, the year two coach backed up his comments from last December by doubling down on his praise in development of Cole under esteemed Cardinal oline coach Sean Kugler. To date, the Cardinals have not added a capable center to compete with Cole as it’s presumed the former Wolverine will helm the position this fall.

Cole’s ascension into the starting lineup gives the Cardinals a much needed injection of youth at a position that has been consistently manned by veterans during this era of Cardinal football. Cole may not yet be the refined pass protector compared to peak A.Q. Shipley but immediately offers an upgrade as a run blocker.

Cole’s insertion with the starters leaves a ripple effect on the rest of the oline depth chart.

Thankfully the addition of third round pick OT Josh Jones and the return of veteran OT Marcus Gilbert gives the team much needed depth on the exterior. The interior will likely be addressed during the early portion of training game, with a veteran guard/center potentially brought in for depth purposes.

Veteran guard Max Garcia is also an option to be the “Mason Cole” of 2020.

Other options for potential “pop” years: