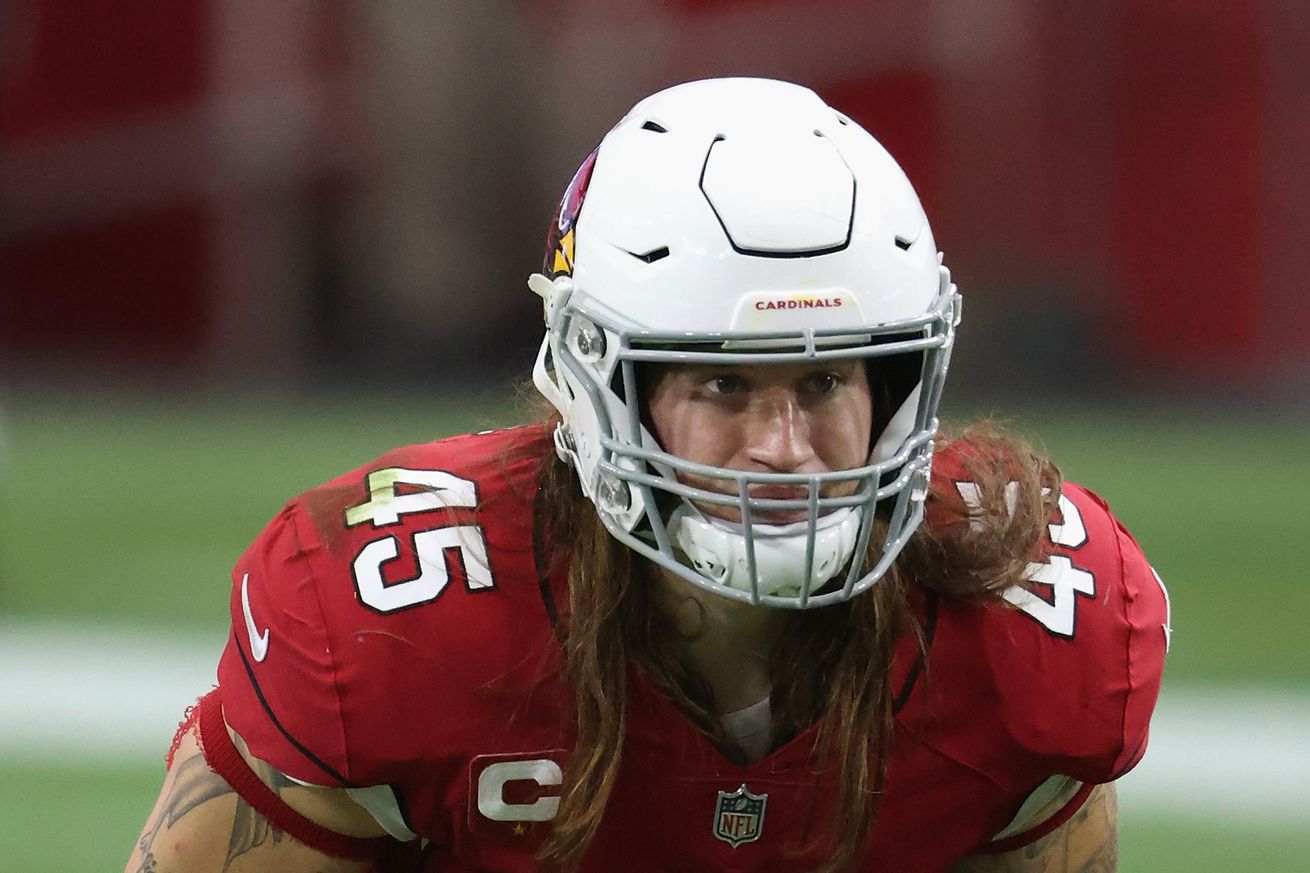 The Barbarian lived up to his nickname against the Jets on Sunday. | Photo by Christian Petersen/Getty Images

With several big-name players not living up to their paychecks, it’s fallen to a group of lesser-known Cardinals to get this team over .500. Let’s celebrate some of them today.

That was just what I needed to see.

Like a lot of Cardinals fans, I was in panic mode after back-to-back losses to the Lions and Panthers. But after the easy win over the Jets, I’ve stepped back from that ledge, my friends.

Kyler Murray and DeAndre Hopkins were the stars on offense Sunday, racking up yards and highlight plays against the hapless Jets. Budda Baker, playing hurt, still looked like one of the better safeties in the league, leading the team in tackles and notching a sack.

But outside of those three, the Cardinals haven’t gotten a ton of production out of their other big-name players. In fact, GM Steve Keim recently called out players “making an exorbitant amount of money” who weren’t producing.

He didn’t name names, but I mentioned some a couple weeks ago— and that list was far from complete. On offense, Kenyan Drake has looked sluggish, Larry Fitzgerald has been a ghost, and Christian Kirk had been struggling with health and playmaking until a good game on Sunday.

The list on defense is even more egregious: Chandler Jones had just one sack before suffering a serious biceps injury on Sunday. Massively hyped rookie Isaiah Simmons has barely played. Jordan Hicks has been below-average against the run and pass both. Patrick Peterson has been utterly mediocre.

Nonetheless, we’re 3-2 and looking improved on both sides of the ball—no thanks to these supposed stars. Instead, there are several lesser-known players, unsung heroes if you will, who have picked up the slack. Let’s give a few of them shoutouts today.

Edmonds—do we have a nickname for him yet?—looked like one of the best players on the field on Sunday, turning 8 touches into 94 yards and a touchdown. Contrast that to Kenyan Drake’s 62 yards on 19 touches (plus a touchdown). Drake looked like he was running through molasses all day, while Edmonds looked positively electric. I don’t know how likely it is that Edmonds fully supplants Drake, but he has clearly carved out a larger role for himself in this offense.

When the Redbirds signed Beachum this offseason, it looked like a simple depth move. Marcus Gilbert or Justin Murray was assumed to be the starter at RT, and Josh Jones was the heir apparent. But then Gilbert opted out and Beachum leapfrogged Murray to earn the starting gig. He’s been quietly impressive with a 68.0 PFF grade and above-average grades both as a pass blocker and run blocker. He’s been a nice Keim Time signing.

I keep waiting for this team to unleash Isabella, who has consistently flashed big-play ability in limited playing time thus far in his brief pro career. Yes, he’s incredibly boom-or-bust—see his 2/3 for 3 yard performance against the Panthers—but he’s still averaging 15.0 YPC with 2 TDs this season. Yet he hasn’t seen more than 4 targets in a game. I get that you want to feed Hopkins and that there are a lot of other options in this offense, but none of them are as young or electric as Isabella. Let’s hope we see an expanded role for him moving forward.

Although not as big of a name as fellow offseason signings Jordan Phillips and De’Vondre Campbell, Kennard has nevertheless been the best of the trio thus far (when healthy). He’s been our highest-graded starting defender per PFF with strong grades against the run and as a pass rusher (and decent enough in coverage). He’s currently nursing a calf injury, but when he returns, he’ll be a big part of the plan to replace Chandler Jones’s pass-rushing production.

I’m a night owl, so I rarely listen to Doug and Wolf these days, but I have to imagine Ron Wolfley hasn’t been able to shut up about “The Barbarian” all week. (He had to have been the Monday morning Pantera callout, right?) The longtime special teams ace was thrust into defensive duties on Sunday and delivered with 2 sacks of Joe Flacco. This obviously won’t be a regular occurrence, and I’m not sure he’ll have a much of a role on defense when Kennard returns, but Gardeck’s emergence was one of the most pleasant developments on Sunday.

Banjo is another hurt defender (he’s nursing a hamstring) who was having himself a nice season before the injury imp struck. Thrust into the lineup after all the safety injuries, Banjo is actually the Cardinals’ second-highest-rated regular defender after Kennard—and just ahead of Budda Baker. Obviously, Banjo isn’t better than Baker, but he’s been around the ball when he’s been on the field and somewhat helped stop the bleeding in the secondary. Hopefully he can get back on the field soon.

These are some of the guys who have made this 3-2 start possible, imperfect though it may be. I don’t know how much impact they’ll have over the rest of the season, but it’s already been more than some of our big-name players. If those guys can get somewhat back on track, it’ll give our team a major boost. But I’m not holding my breath in most cases.

Who are your unsung heroes so far this season, Cardinals fans? Let us know below in the comments.