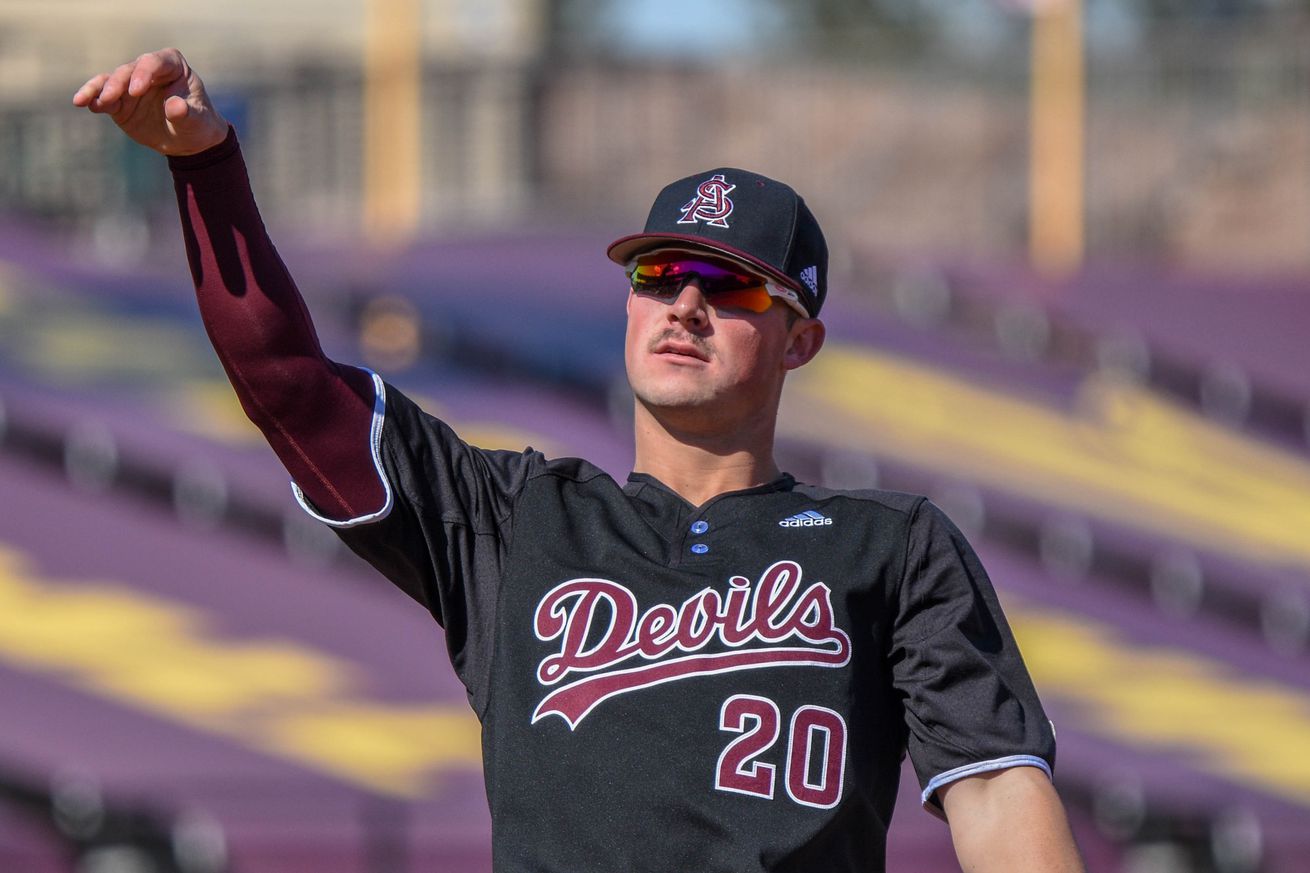 Where are the Sun Devils headed?

The shortened MLB Draft will scheduled for June 10-11. The shortened five round draft with most likely feature a handful of Sun Devils but a lot less than if the draft was its typical 40 rounds. Anyways here’s a check into where Arizona State players are ranked and where they might be drafted.

No. 1 1B Spencer Torkelson

Keith Law from The Athletic (Top 100)

No. 2 1B Spencer Torkelson

Torkelson hit everyone’s radar in the spring of 2018 when he hit 25 home runs as a freshman to lead all Division I hitters, then hit 7 more on the Cape that summer to finish one off the league lead. Torkelson is extremely strong, hitting for all this power with almost no stride and a two-handed finish that makes his swing almost short by comparison to most power hitters, and while he’s shown some swing-and-miss he’s also been willing to take walks, leading the country this spring before the shutdown. He’s a good enough athlete that he might be able to handle left field, although I’d bet on him spending most of his career at first base. There’s some question over how good his pure hit tool is — whether it’s truly plus or whether it’ll settle in at average when he’s consistently facing better pitching — but even if he’s a 50 hit/70 power guy in the end, that’s someone who hits fourth and makes a handful of All-Star teams.

Williams is one of the few legitimate shortstops in the college class this year, with no doubt that he’ll stay at the position and enough chance to hit that he might end up a regular. At the plate, he has a short, slashing stroke that produces very high contact rates without any power; he’s struck out just 49 times in 549 plate appearances as a Sun Devil, with 55 walks but with an isolated power of just .100 even though he plays half his games in Tempe. In the field, he has quick hands and good footwork along with an above-average arm. It’s a low-ceiling profile but the lack of true shortstops gives him value in this draft.

Workman won’t turn 21 until October, which appeals to the many teams who value age very highly in their models, but also led the Sun Devils in strikeouts last year and was second in the Pac-12 in strikeouts when the season ended this spring. He’s strong but has a no-load approach that doesn’t make much use of the lower body to generate power. He’s got the arm and agility to stay at third base and could potentially move to second depending on the needs of the team that drafts him. There are some raw ingredients to like here but he has to improve his contact rate and also drive the ball more frequently.

No. 2 1B Spencer Torkelson

You’d think Torkelson was a Joe Hill creation given the fear he invokes in opposing pitchers. He walked in 31 of his 82 plate appearances during the abbreviated NCAA season, but he still managed to improve his career homer count to 54 in 498 at-bats. Torkelson has the requisite eye, strength, and barrel control to profile as a quick-moving thumper. The biggest knock on him is that he’s only a right-handed first baseman, and those seldom make for satisfying early selections — it’s basically a sample of the ballad of Andrew Vaughn, the third pick in last year’s draft. Don’t be surprised when Torkelson ends up going higher than Vaughn, perhaps even first.

Williams is the second of three Arizona State infielders likely to be selected within the top 100 picks, alongside first baseman Spencer Torkelson (No. 2 on this list) and third baseman Gage Workman. Williams is a lanky, able-bodied shortstop with more than sufficient arm strength, hands, and burst for the position. That’s a good thing because his offensive skill set is limited to putting the bat on the ball and minding the zone (he was on pace to walk more than he fanned for a second year in a row). His .703 OPS this season was the second-lowest among the eight Sun Devils with at least 50 plate appearances, and he finished his collegiate career with a .100 ISO, as well as just five home runs and 15 stolen bases (on 25 tries). As a statistical point of reference, Nick Ahmed was a light-hitting, glove-first shortstop at UConn, and he compiled eight home runs, 68 steals (on 85 tries), and an .087 ISO. (Of course, Ahmed is currently playing on a contract worth more than $30 million, so having a presumed low floor isn’t all bad news.)

There’s still no reason to make any changes here, with Torkelson’s offensive upside combined with the belief he’ll get to the big leagues quickly, making him the clear front-runner to go No. 1.

Torkelson established himself as one of college baseball’s top power hitters as a freshman, breaking Barry Bonds’ freshman home run record at Arizona State. His 25-home run campaign earned plenty of accolades, including the Pac-12 Freshman of the Year. The junior first baseman finished his career with 54 home runs, which was two short of Bob Horner’s program record.

On top of his propensity to hit long balls, Torkelson recorded a .337 batting average and 1.192 OPS in his three seasons with the Sun Devils.

ESPN’s Kiley McDaniel told reporters Thursday that Torkelson and the Tigers will be paired together with the first pick, per Evan Petzold of the Detroit Free Press.

“It’s hard to imagine them not taking him with what’s coming from their camp, people close to that camp,” McDaniel said. ”It’s not really an actual conversation unless something really drastic happens that I don’t foresee happening.”

If Torkelson is selected at the top, he would be the first player at his position chosen at No. 1 since Adrian Gonzalez in 2000.

I did think about Asa Lacy here, but Torklelson is the best, most productive power hitter to come out of college since Kris Bryant.

Williams is one of my favorite players in the draft class to watch. I just can’t get enough of the effortless way he plays shortstop.

An impressive athlete who can play either position on the left side of the infield who is just coming into his own as a hitter. I’m liking the upside here.