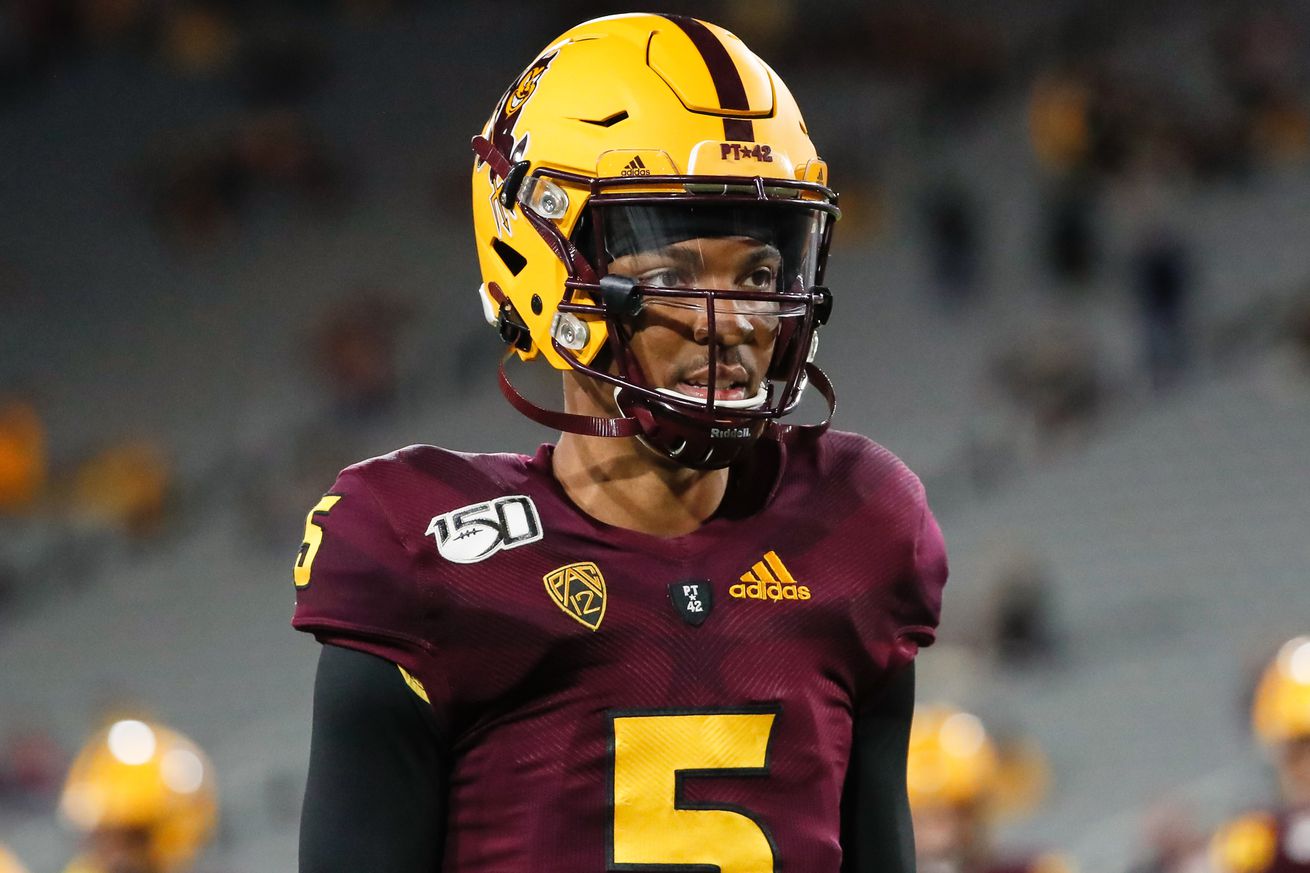 A lot of new playmakers

Jayden Daniels might have surprised some in his freshman year, but he certainly won’t be able to sneak up on anyone during his upcoming sophomore campaign.

The highly regarded second-year signal caller spoke to media on a zoom call on Saturday, discussing mainly how his offensive unit has been preparing and practicing.

“It’s definitely been weird having camp in October,” Daniels said. “But I’d rather have this than have no season at all. Everyone in the offense worked hard on their own when we couldn’t practice, so things have been running smoothly.”

With the departure of Brandon Aiyuk and Eno Benjamin to the NFL, there are certainly some question marks regarding the Sun Devils’ skill positions. Daniels, as well as offensive coordinator Zack Hill, has confidence in the young playmakers.

“Last year, we knew who was going to be getting the ball,” Daniels said. “Now we know Frank (Darby) is in a leadership role, but other young guys have been hungry and stepping up.”

“These first few practices for us have been about identifying who our playmakers are,” added Hill.

With this uncertainty comes competition in camp, which is welcome by the ASU coaching staff. In the receiver room, LV Bunkley-Shelton and Johnny Wilson have emerged as promising young targets.

“It’s an extremely competitive group,” Hill said. “It’s a good thing to have young guys in there pushing the older guys. Everybody has to earn their reps.”

He agreed with Darby’s assessment of the WR group as the best it has been in recent years. For a receiver group that has featured back to back first round picks over the last two seasons, this is no small statement.

Daniels has been developing chemistry with all his new weapons, and cited personal relationships as a reason for the early success.

“I’ve known (Johnny Wilson) since high school,” he said. “Nothing he does is surprising to me.”

Daniels will be joined in the backfield by junior college transfer Rachaad White. White will be complimented by a slew of young backs, but he seems poised to get the lion’s share of carries out of the gate.

“He’s a smooth football player,” Daniels said of White. Added that he has a certain toughness and experience from playing at the junior college level.

One potential positive coming from a long offseason is the extra time Daniels has had to study a new offense that has been tailored to fit his unique skill set.

“I definitely feel like I have a more in depth knowledge of the offense now than I did in spring practice,” he said. “It’s been really cool to have input in the offense, coaches ask me what plays I like running.”

Daniels and the Sun Devils will look to continue their positive practice reports, as the season kicks off in Southern California in less than a month on November 7th.

“Jayden is doing a really good job of picking things up and learning.” Hill said. “Now it’s a matter of fine tuning these next few weeks.”

Due to Arizona State practices being closed to the media, Sun Devil Athletics have released their own practice reports and depth charts. On the offensive side here is a few notes based on what has happened.

— As mentioned above Wilson and Bunkley-Shelton have worked their way into starting reps with the first team. The door was also opened when wide receiver Jordan Kerley opted out of the 2020 season.

— Despite starting plenty of games last season, LaDarius Henderson hasn’t locked up a starting spot on the offensive line. Redshirt freshman Ben Scott from Hawaii has been listed as a co-starter with Henderson at right tackle through the first two reports.

— The rest of the offensive line looks like this from left to right.