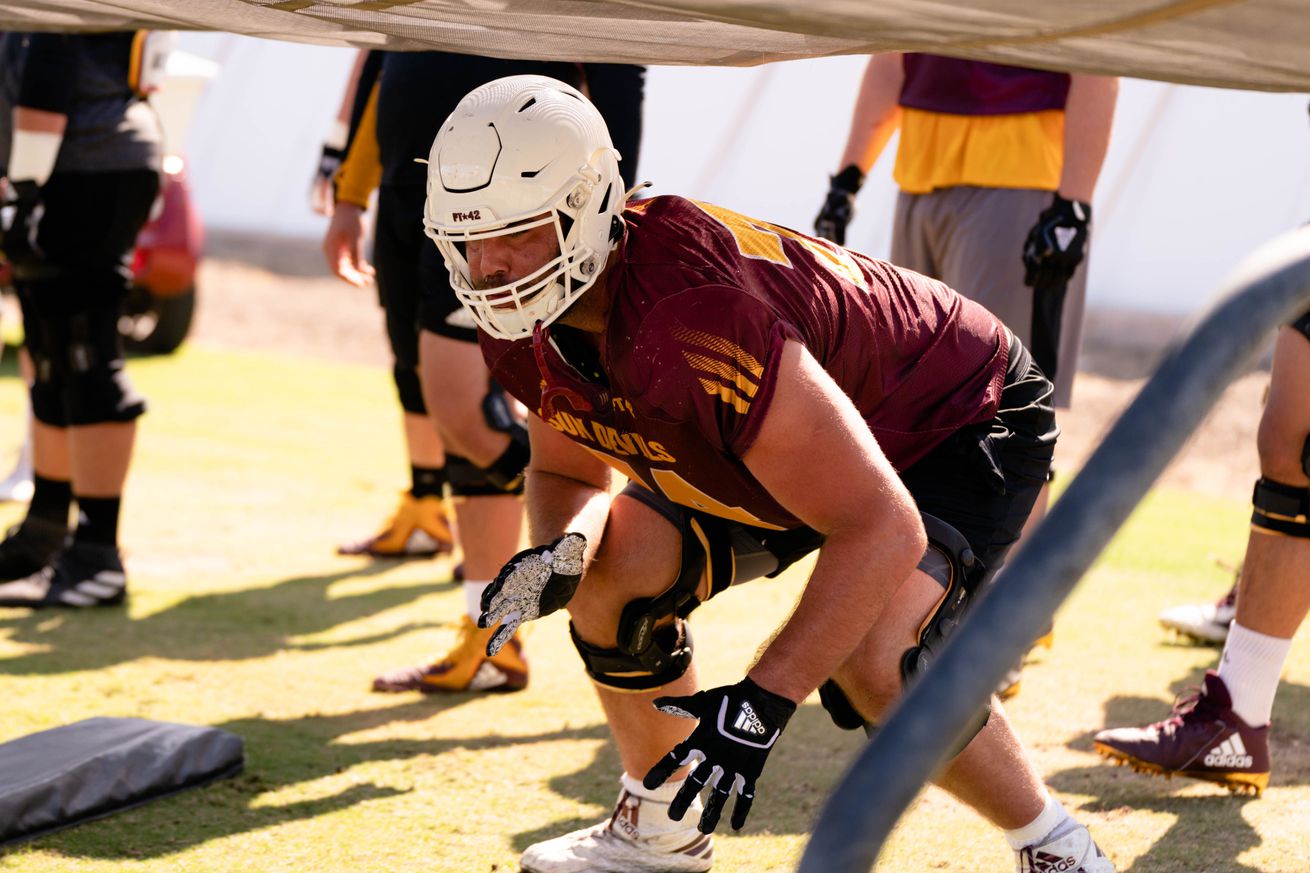 Four out of five spots have been solidified.

Arizona State’s offensive line enters the 2020 season with an area that was lacking last fall: experience.

Struggling for depth, the Sun Devils were forced to start two true freshmen on their offensive line. Dohnovan West and LaDarius Henderson were among the 29 new faces that suited up for ASU and found early playing time. Injuries were responsible for catapulting the young players into the starting lineup, where they essentially had to learn the ins-and-outs of their new roles at a rapid pace.

The results were mixed. ASU’s depleted offensive line allowed 33 sacks to its opponents. However, West established himself as a reliable option at right guard and drew heaps of praise from his coaches for his performance. The No. 9 nationally-ranked offensive line recruit a year ago, West quickly emerged as one of ASU’s most talented players in general.

#ASU LG Dohnovan West said he’s up to 295 pounds but doesn’t want the added weight to hinder his speed.

He said his quick feet in the zone schemes gives him an advantage over other Pac-12 linemen.

This year looks to be different. West and Henderson are a year older, with their time in the trenches from last year to build upon. Their growth was apparent to senior center Cade Cote, who returns to the Sun Devils after the NCAA granted him a sixth year of eligibility in March.

“They’re more comfortable,” Cote said after Monday’s preseason practice. “They’re more confident in their calls. Last year was kind of trial by fire but as the year went on and as this year is developing, they’re turning into really good players and I think they’re both going to be really great players when this is all said and done.”

Cote, who only played in three games before redshirting due to a broken foot, called last year’s events “dream-shattering.” After playing sparingly through his first few years, Cote was handed the reigns to the starting job before the injury. A year later, it appears nothing has changed regarding ASU’s trust.

“The starting spot is mine to lose, but I’m going to go out every day like I’m competing for a spot,” Cote said. “I’m going to be the best center I can be for this team.”

Cote also said offensive coordinator Zack Hill’s scheme is the most complex he has ever played in, but noted it was a good thing. The presence of COVID-19 limited the interaction between teammates before the start of preseason practices, which meant the unit had to spend time getting on the same page.

Henry Hattis from Stanford and Kellen Diesch from Texas A&M add to the maturity of the offensive line as two graduate transfers. Hattis expects to play primarily at right guard, but he provides versatility from playing a variety of roles during his time with the Cardinal. Standing at 6-foot-7 and weighing 300 pounds, Diesch figures to protect Jayden Daniels’ blind side at left tackle.

Despite losing four seniors, the combined experience of the offensive line has allowed ASU to lock down most of their starting spots for good. Cote, Hattis, and Diesch appear to be locked into place at their positions while West will start at one of the guard positions. The remaining position to receive a designation is right tackle. Through the first three practices, first-team reps were rotated between Henderson and redshirt freshman Ben Scott.

Overall, the ASU group spoke highly of each other’s abilities and character. Although only Cote, West, and Henderson played together last season, the unit appears to be meshing well and building chemistry.

“It’s a good room to be in and there’s a lot of different personalities that make for a really interesting room,” Hattis said. “There’s Cade, who’s definitely the oldest of the group and he acts like he’s kind of the big brother. Then you’ve got Dohnovan and [Henderson], kind of the young guys who have moved their way up in the ranks. It’s definitely fun and we’re having a good time.”

No matter who starts at the final spot, the offensive line that takes the field on Nov. 7 against USC aims to be more cohesive and stable in Jayden Daniels’ second year.

“Last year we had a chance to be a great O-line and we were still a good O-line but we struggled a little bit because guys got hurt and guys got moved around,” Cote said. “I think this year we’ve got a good chance to go into the season with a steady set of five.”