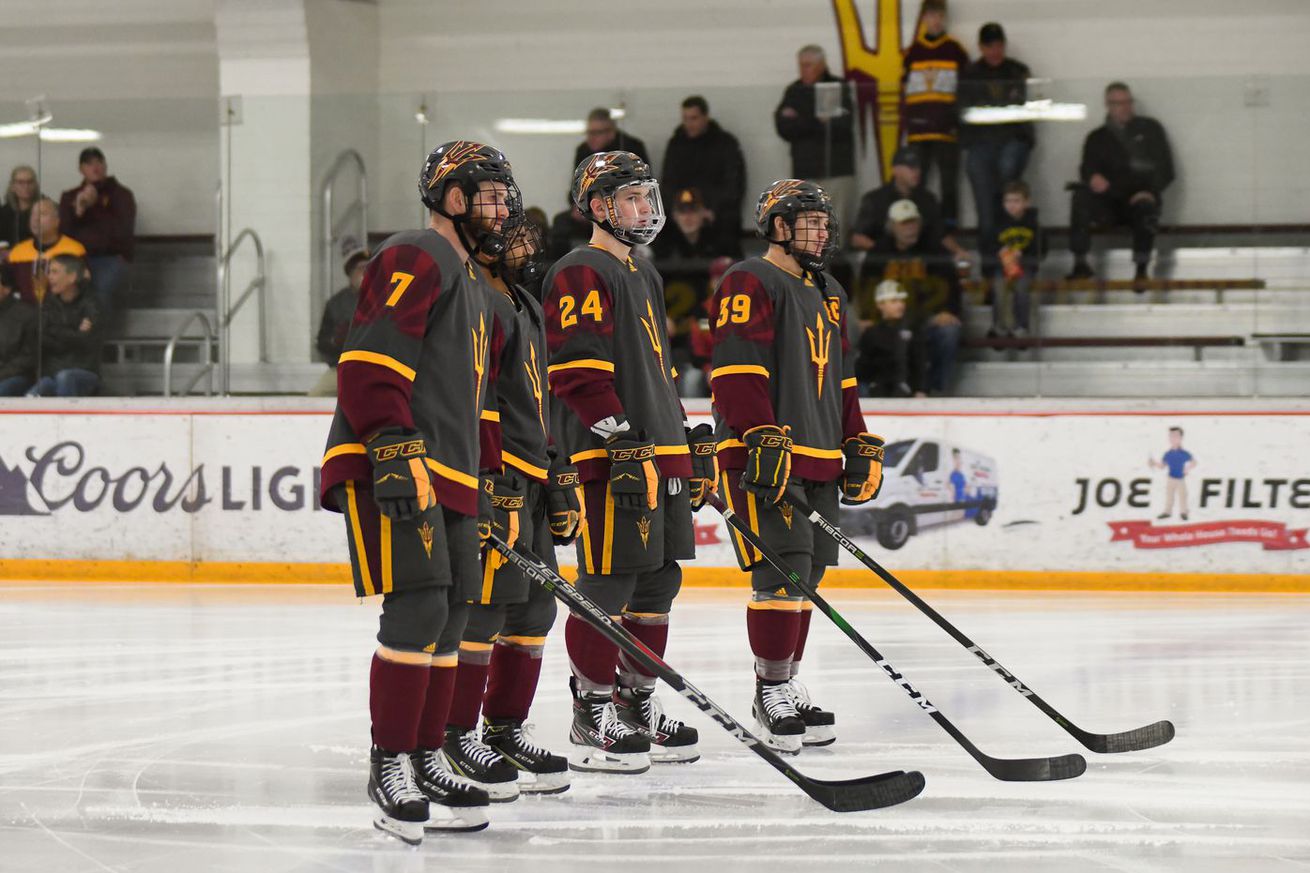 Arizona State coach Greg Powers revealed his 2020-21 captains for next season. The four leaders consist of two defensemen and two forwards, and they are the longest tenured group of captains in program history.

Former captains Brinson Pasichnuk and Tyler Busch recently graduated, and there are now two new names as upperclassmen leaders. Here’s a look at who will be donning the C’s and A’s.

Senior defenseman Jacob Wilson is one of ASU’s veterans who will be wearing a C. The Ballwin, Missouri native had 11 points in 29 games played, and he was a plus-6.

Over the last three years, he has been one of Powers’ most steady, stay at home defensemen, and he is known for his strong physical play. He was an alternate captain in 2019-20.

Two blue-liners are rounding out the “C’s” for Sun Devil hockey next year. Junior defenseman Josh Maniscalco is the other captain, and it is his first time with the honor at ASU.

Maniscalco has proven his worth as one of the best two-way d-men in the country over the last two years, and he turned down a variety of professional NHL offers this past offseason to return to Tempe.

Next year will be his first time without playing alongside his defense partner, Pasichnuk, who graduated and agreed to terms with the San Jose Sharks at the end of March.

Maniscalco had 32 points in 36 games in 2019-20, and he was fourth on the team in scoring while helping to facilitate ASU’s top unit on the power play. Powers had this to say about the Perkiomenville, Pa. native in November:

“He’s a stud,” Powers said. “We knew what we were getting when we got him. He had a great freshman year, and he has just continued to evolve to the point where now, I think he’s one of the top defenseman in college hockey just as a sophomore.”

Senior forward Dom Garcia will be one of ASU’s alternate captains. It is his third year in a row on the captain’s committee, as he has served the last two years with an “A” as well.

Known as a physical bruiser and an integral part of the ASU penalty kill, Garcia was a plus-2 in 29 games last season.

He only had four points, but the Las Vegas native’s energy and hard work has been one of the most consistent aspects of his game during his time in Tempe.

Garcia is known for his pregame announcements with the starting lines, and he’s brought a contagious attitude to the rink over the last three seasons that many players have latched onto.

Rounding out the captain’s list, senior forward Johnny Walker is another alternate captain along with Garcia.

The Phoenix native led the team in goals last year with 20, and he was second on the roster in points with 38 in 36 games.

Walker has had some of his biggest goals in the biggest games in recent ASU memory, including a breakaway game-winner on the road at No. 6 Penn State during the 2018-19 season, and a hat trick in the Sun Devils upset over No. 4 Denver this past season.

He has been on Hobey Baker Watchlists the last two years, and has developed into more of a leader over the last few seasons. Walker even wore an “A” on his sweater for six games last year when Wilson was out due to injury.

Now as a captain, Walker can honor the players who wore the letters before him, including former captains Dylan Hollman and Anthony Croston, who Walker spoke at length about as leaders in January.

“As a junior or senior on this team, you are expected to step up and be the go-to guy every night. Anthony Croston and Dylan Hollman, they were two of the best leaders I’ve ever been around and that’s carried on,” Walker said.

“I think more than anything, I’ve learned a lot from Dylan Hollman about how to carry myself on a day-to-day basis. Off-ice, just taking care of my body. He was always doing the right things on and off the ice with working hard and kind of keeping to himself…I learned a lot from Dylan. It didn’t matter if he was playing hockey or just working somewhere, he’ll be successful no matter what he does. He taught me as long as you do your job and work hard, everything else will take care of itself.”

Sure enough, those things have fallen into place as Walker now finds himself as a captain.